Rap's crossroads: Why big-name rappers are daring to be religious

From Kendrick Lamar to formerly young Jeezy, more and more big-name rappers are willing to explicitly discuss their faith on the record 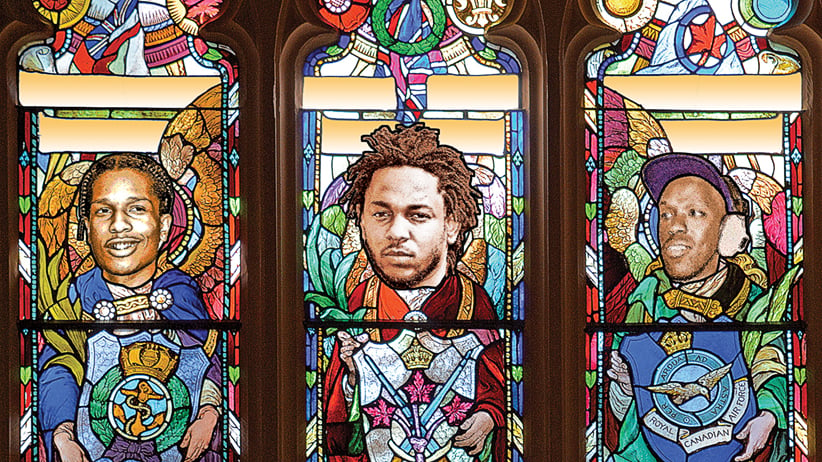 A$AP Rocky, Kendrick Lamar and Shad are just some rappers who are showing a willingness to openly discuss their faith on the record. (Sarah MacKinnon and Richard Redditt)

He was seen as the second coming. Kendrick Lamar, the California rap supernova whose 2012 album Good Kid, M.A.A.D. City earned comparisons to hip-hop’s masterworks, was under intense pressure to repeat its success. So when the world got the searing To Pimp A Butterfly last March, it was a surprise—in no small part because of how openly religious it was. There’s a long verse from a cajoling Satan; another song is written from the perspective of Jesus Christ; there’s an obsession with the seduction of sin. But for the MC who once boasted that he was “more Pappy Mason than Pastor Mason”—identifying more with the drug kingpin than the rapper-turned-reverend—the ambitious move paid off, nabbing him a field-leading 11 nominations at the 2016 Grammy Awards (update: Lamar won five Grammys on the evening). “God allowed this album to be top-tier without a radio single,” he exulted last year.

Lamar’s religious gamble is part of a growing trend in hip-hop, of big-name rappers explicitly rapping about their faith. Jeezy, known for his stentorian rhymes on drug hustling, turned inward on his December album Church in These Streets, dropping the “young” from his name in a sign of maturity and trading cocaine couplets for the catechism. A$AP Rocky, the crown prince of hip-hop cool, led off his 2015 album with a meditation on his relationship with the church. Earlier this month, Lecrae, who also happens to lead a Christian ministry, released Church Clothes 3, the follow-up to an album that made him the first Christian rapper to have a No. 1 song on iTunes. Even the modesty-challenged Kanye West, whose 2004 track Jesus Walks remains the gold standard of high-profile religious rapping, speaks openly of his faith; during a high-profile Twitter rant, he described his new record The Life Of Pablo as a “gospel album,” and at a 2014 concert, he defined himself simply: “I’m a married, Christian man.”

It feels somewhat strange. Hip-hop has carved its way into the centre of pop music, yet pop’s secular confines usually marginalize artists that dare to get overtly religious. The MC Malice, for instance, of the drug-rap duo The Clipse, has embraced Jesus and changed his name to No Malice, quietly putting out Christian hip-hop; the other half of the group, his brother Pusha T, doubled down on the dark, druggy tales and has enjoyed more success than ever. The aforementioned Pastor Mason—the rapper Ma$e—saw his hip-hop influence dim markedly after becoming a man of the cloth. And Joseph Simmons—now known as the Pentecostal minister Reverend Run—didn’t discuss his religion openly until well after the influential heyday of his group, Run D.M.C. “But it’s not so much a fringe thing anymore,” said Michael McGuire, a cultural studies professor who teaches a rap and religion course at Halifax’s Mount Saint Vincent University. “We went through a period where rappers, especially big-name rappers, weren’t expected to say anything of substance. Now we have this new crop of rappers who are tired of being pigeonholed like that.”

Religion isn’t new to rap. Islam, particularly the Five Percent Nation sect, has been a foundational force, guiding black youths in rap’s formative years with artists like self-styled “God MC” Rakim and the Wu-Tang Clan slipping religious references into their lyrics. Some of rap’s most enduring expressions originated in religion: rappers were urged to “bless the mic,” and they would greet each other as Gs—not gangstas, but gods, says Syed Adnan Hussain, a religious studies lecturer at St. Mary’s University in Halifax. And Christianity was hardly invisible, from the peacenik group Arrested Development, to Tupac Shakur’s street gospel, which explicitly inspired Lamar’s latest.

But with America roiled by racial unrest, it’s not surprising that more prominent rappers feel emboldened to risk their cultural cachet to obliquely talk about the faith ingrained in the culture. “This is an age of church bombings, of Charleston, of white racist cops shooting down black people in the streets. People are starting to talk about things like blackness. And church has been a large part of the African-American community going back a long way,” says McGuire. “It seems natural that rap would be an aspect of that exploration of what are we really dealing with as a society.”

“If rap is about keeping it real, then it’s about representing the kind of stuff that keeps it real,” agrees Hussain. “Religion is one of those things.”

For Shadrach Kabango—better known as Shad, the host of CBC’s arts radio show Q, a rapper, and a Christian—suffusing his religion in his songwriting felt natural. “I’ve always mined the deepest places within myself in my music, so that’s going to go to spiritual places, it’s going to go to core values.” He understands Lamar’s Butterfly effort: “There’s a quest for authenticity in what he’s doing. I think it’d be inauthentic of him not to represent the spiritual side of his struggle.”

Representing yourself truthfully has always been essential in hip-hop, and perhaps more so with the genre’s globalization. With that higher platform, some rappers have the profile of modern-day reverends, bringing a voice to undiscussed issues. As Lamar told the New York Times: “I’m the closest thing to a preacher that they have.” It’s how today’s rap gods are doing God’s work, too.