A look back at the amazing career of George Martin, who died Tuesday at the age of 90—from his game-changing work with the Beatles to MJ and beyond 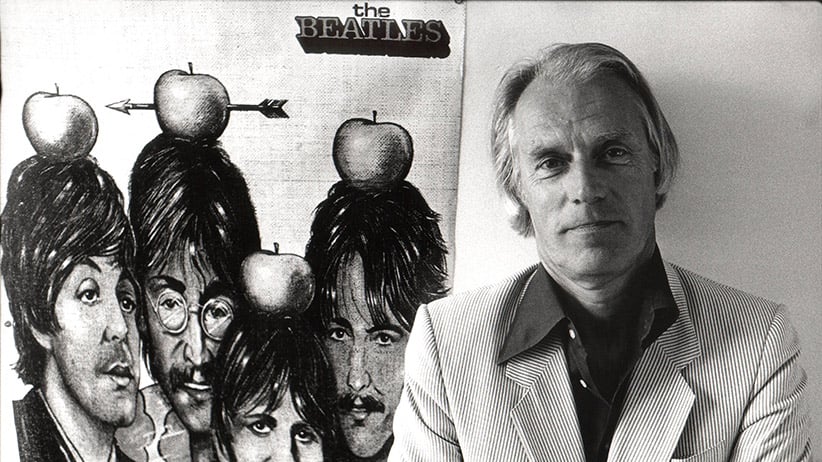 The Beatles changed modern culture—that’s an indisputable fact. But they were only able to do so because George Martin changed the way we all listen to music.

George Martin, who died yesterday at age 90, was the Beatles’ arranger and producer on everything they ever did (even Let It Be, where Phil Spector got most of the credit for doing overdubs and remixing). In other words, he’s the principal sonic architect of the most groundbreaking pop music in the Western canon. Of course, the four members of the Beatles—particularly the two songwriters, Paul McCartney and John Lennon—were never short of ideas, and Martin once quipped that the four Beatles could have made all their records by themselves. But a group that talented needs an objective observer, someone to balance the egos and filter the noise and sculpt what becomes the finished product. And with a group as ambitious as the Beatles, it took the classically trained Martin to orchestrate their wildest, most ornate visions.

George Martin is one of only a handful of music producers in pop history—alongside Quincy Jones, Phil Spector, Rick Rubin, and Timbaland—to be as well-known, years later, as the artists with whom they worked.

We all take the Beatles’ records for granted; it’s hard not to. It’s easy to forget that what made them the greatest Western pop act of all time is not just the calibre of the songwriting, it’s that the Beatles had something for everyone. They were purveyors of teenybopper love songs; the rousing rock band; the balladeers covered by artists of all generations and genres; the psychedelic experimentalists who embraced country music and Indian instrumentation; the whimsical jokers who cavort in a “Yellow Submarine”; the avant-garde innovators who first put feedback on a pop record and embraced electronic innovation. All of that made sense under one roof because George Martin was at the helm.

Martin became a staff producer at EMI Records in 1950, and had hits with novelty records by Peter Ustinov, Peter Sellers and the Goon Show. Though he’d made a few pop records, he had never recorded a rock band before. He thought the Beatles’ demo was “unpromising,” but he liked the vocals of Lennon and McCartney. The rest is history.

After the Beatles, Martin largely rested on his laurels—understandably. He would reunite several times with McCartney, notably on “Live and Let Die” (Martin also wrote the score for that James Bond film) and three albums in the early ’80s. He worked with Mahavishnu Orchestra, Cheap Trick, America, Jeff Beck and Ultravox. He helped Pete Townshend turn Tommy into a Broadway musical in 1992. He produced the post-Diana version of Elton John’s “Candle in the Wind.” He produced the song “The Reason” on Céline Dion’s blockbuster 1997 album Let’s Talk About Love. Largely, he worked on Beatle-related projects, like the Cirque de Soleil production Love, and the Beatles’ Anthology project. If those highlights from the last 46 years of his life seem slim compared to his output from 1963-70, keep in mind that, after the Beatles, George Martin didn’t need to prove anything to anybody.

The boss of the Beatles

“I Feel Fine,” 1965. After a flurry of pop hits, the Beatles started to stretch their wings and embrace the album format. As they did, their musical horizons started to expand. This song opens with guitar feedback, one of—if not the first—time that was heard on a charting single. Ringo Starr’s Latin-influenced beat gives the song an extra bounce.

“Tomorrow Never Knows,” 1966. It was the Revolver album where the doors blew wide open, and this track, which features 16 separate tape loops intertwining throughout a droning rock song, is the prime evidence. This is the kind of track that rewrote all the rules.

“Eleanor Rigby,” 1966. It was Martin’s idea to set this song to a string quartet. He said the arrangement was inspired by Bernard Herrmann’s 1960 score for Albert Hitchcock’s Psycho.

The entire second side of Abbey Road.

“Don’t You Rock Me Daddy-O,” the Vipers Skiffle Group (1957). Though Martin mostly worked on classical, jazz and comedy records before the Beatles came along, he also captured the raw energy of bands like this. Though John Lennon famously protested that the Beatles were “not a skiffle band,” he did play in one as a teenager.

“Strictly for the Birds,” Dudley Moore (1961). The comic was also an accomplished pianist, and this novelty hit captures the absurdist British wit of the day, a sense of humour Martin shared with the Beatles.

“Right Said Fred,” Bernard Cribbins (1962). Martin would later fill Beatles songs like “Yellow Submarine” with comical sound effects, which by the sounds of this he had been doing for years.

“Don’t Let the Sun Catch You Crying,” Gerry and the Pacemakers (1964). After the Beatles took off, Martin spent most of the ’60s capturing their prolific pace. However, he also helmed several big hits for this group of fellow Liverpudlians, including this gorgeous ballad.

“Can’t Buy Me Love,” Ella Fitzgerald (1964). One of the first major artists to cover the Beatles, Fitzgerald tapped Martin to produce this hit, on an album where she also covered Cole Porter and Broadway staples.

“Goldfinger,” Shirley Bassey (1965). A strong contender for the best James Bond theme of all time—hell, one of the best movie themes, period—the boss Bassey rides this most brassy arrangement to the moon and back.

“Live and Let Die,” Paul McCartney and Wings (1973). Martin wrote the score to this James Bond film, and it’s his orchestrations that tie together McCartney’s ambitious bombast.

“Say Say Say,” Paul McCartney and Michael Jackson (1983). As he aged, Martin was never stuck in a ’60s time warp, as this uber-’80s No. 1 hit illustrates. In fact, there’s nothing on this single that sounds any different from what Quincy Jones, at the height of his powers, had done the year before on Thriller.

“Candle in the Wind,” Elton John (1997). Nothing about this straightforward piano-and-orchestra single illustrates Martin’s particular talents, but it was the soundtrack to a cultural milestone and one of the biggest hits in the decade. It also meant George Martin was one of the extremely few recording artists to have No. 1 hits in four different decades.