The entertainment maestro who guided Celine Dion to superstardom, and then married her, had been diagnosed with throat cancer 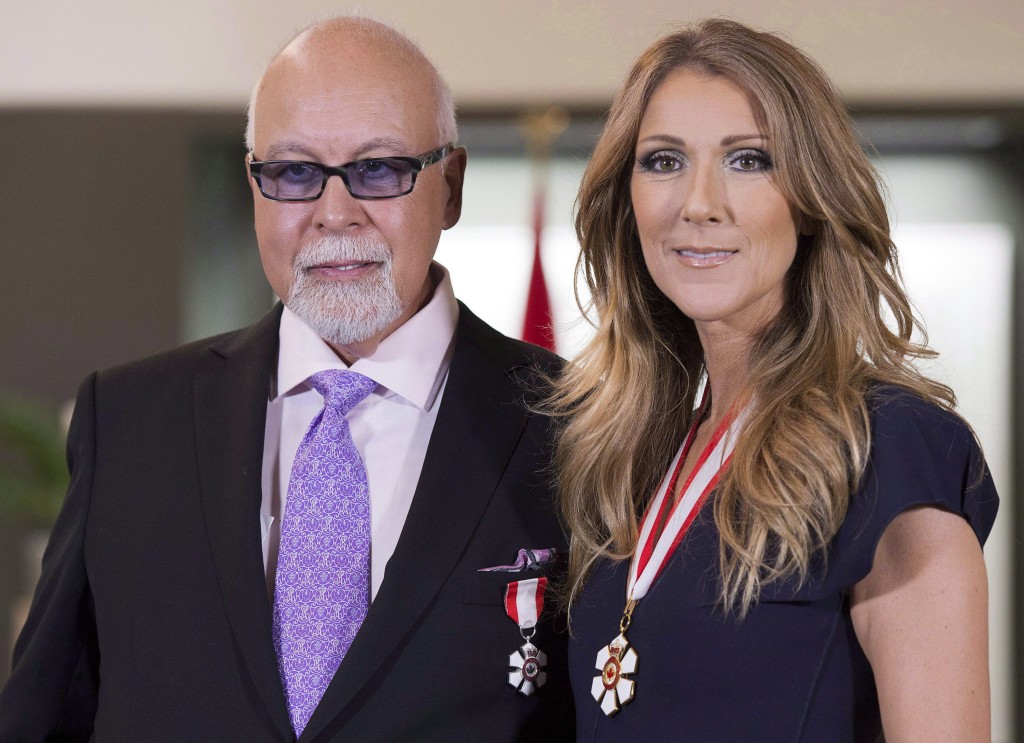 Celine Dion and husband Rene Angelil pose for photos after being decorated with the Order of Canada in Quebec City on Friday, July 26, 2013. Angelil, the entertainment maestro who guided Celine Dion to superstardom and then married her, has died, according to Francine Chaloult, a spokeswoman for Dion. THE CANADIAN PRESS/Jacques Boissinot

LAS VEGAS, Nev. – René Angélil, the entertainment maestro who guided Celine Dion to superstardom and then married her, has died, according to Francine Chaloult, a spokeswoman for Dion.

Chaloult said Angélil died Thursday morning at his home in Las Vegas. He had been battling a recurrence of throat cancer.

He had an an initial surgery in April 1999, battled it successfully, but had to undergo another operation in December 2013.

While Dion and Angélil’s entourage insisted he was doing well, Angélil stepped back from the day-to-day management of his megastar wife’s career in June 2014. He turned it over to longtime friend Aldo Giampaolo, a noted impresario himself in Quebec, but remained involved in key decisions.

Just a month after that announcement, Dion said Angélil was focusing on his sons and “working really hard on his health.”

“He’s being a dad at the house, which I’m really happy about,” she told a news conference in Montreal.

In March 2015, she announced she was resuming her residency at the Colosseum in Las Vegas. She said Angélil has a feeding tube and that she was helping him to eat three times a day. Despite his illness, it was Angélil who encouraged her to return to the stage.

“He wants me back, he wants me strong, he wants to see me again because I’m his favourite singer,” Dion said at the Billboard Music Awards in May. “So he wants me out there, and I have to say that I’m ready. It’s hard, but we’re ready.”

One year after announcing she was putting her career on hiatus to dedicate her time to helping her husband in his recovery and tend to their family, Dion returned to Vegas in August 2015.

“I didn’t want to be here at first, I don’t need it,” she told USA Today. “Don’t get me wrong. I love singing for people, but I have priorities.

“But Rene really gave me a gift,” she added. “All my grieving, it was during this last year. I think I’ve got this. For now. When it hits me, it’s going to hit me. But my biggest job is to tell my husband, we’re fine. I’ll take care of our kids. You’ll watch us from another spot.”

When announcing she was putting her career on hold, Dion said in a statement it had been “very difficult and stressful” for the couple as they dealt with the day-to-day challenges of fighting Angélil’s disease while trying to juggle a busy show business schedule and raising three young children. Dion herself was also grappling with a throat inflammation.

All her shows at Caesars Palace were cancelled and a tour of Asia was scrapped.

As she returned to Las Vegas, Dion said doctors weren’t able to say how long Angélil had, but that he’d already planned out his funeral and told his wife he wanted to die in her arms.

The couple, who were 26 years apart in age, married in an elaborate ceremony in 1994 at Notre Dame Basilica in Montreal that drew throngs. Former prime minister Brian Mulroney was among the guests at the ceremony where Dion worn a glittering crystal headpiece, while a TV satirist who was not among the guests brought a camel to stand outside the church in tribute to Angélil’s  Middle Eastern roots.

The nuptials were compared to the Royal wedding of Prince Charles and Diana.

Angélil and Dion have always been one of entertainment’s power couples, owning lavish homes in the United States and Canada but the shrewd entertainment czar sprang from more humble roots.

Angélil was born in Montreal on Jan. 16, 1942, to a Syrian father and a Quebecois mother.

He grew up in the city’s north-end Villeray district where he showed signs of his future career as he put on little shows for his neighbours. One of his friends in school was Pierre Labelle, who would later go on to join Angélil as one of the popular singing Baronnets.

A gifted student, Angélil advanced quickly through school. It was while studying at Ecole Saint-Viateur that he met Jean Beaulne, who floated the idea of creating a singing group. In 1961, as Angélil , Beaulne and Labelle were approaching their 20s, they quit school to go into full-time performing.

The group enjoyed modest success in clubs before they hired Ben Kaye as their manager. That move and their translation of the Beatles’ “Hold Me Tight” caused Les Baronnets to take off.

Over the next several years, the group toured across Quebec but also at venues in the United States, such as in Atlantic City. However, with the departure of Beaulne in 1968, Les Baronnets started to lose traction amid an explosion of other bands on the music scene.

He later struck out on his own and in 1981 received an audio tape in the mail from Dion’s mother, who encouraged him to “listen to it carefully. It’s my 12-year-old daughter.”

Struck by the voice of the young woman, Angélil quickly took her under his wing. He reportedly mortgaged his home to finance her first album.

Success came quickly and Angélil won Quebec’s Felix Award as manager of the year in 1987 and 1988. He gave Dion an image makeover when she turned 18 and launched her first English-language album — “Unison” — in 1990, which established her as an international pop star.

World tours and megastardom followed under his guidance. Dion’s most recent album, 2013’s “Loved Me Back to Life,” topped the charts in Canada before reaching platinum certification four times over.

The lush Colosseum at Caesars Palace was built specifically for Dion, opening March 25, 2003 — the first night of Dion’s first residency (the evening was commemorated with a CBS TV special).

That show, “A New Day…” ran for nearly five years. In March 2011, she debuted a new show, simply titled “Celine,” which she planned to perform through 2019.

The raspy-voiced Angélil was also an avid poker player, having learned the game from his parents. He once qualified at the 2005 World Series of Poker Tournament of Champions. He also finished in the money at the 2007 Mirage Poker Showdown event on the World Poker Tour.