Robert Bateman returns to the Galapagos

From 2015: A celebrated painter on going back to the islands that helped launch a very personal mission 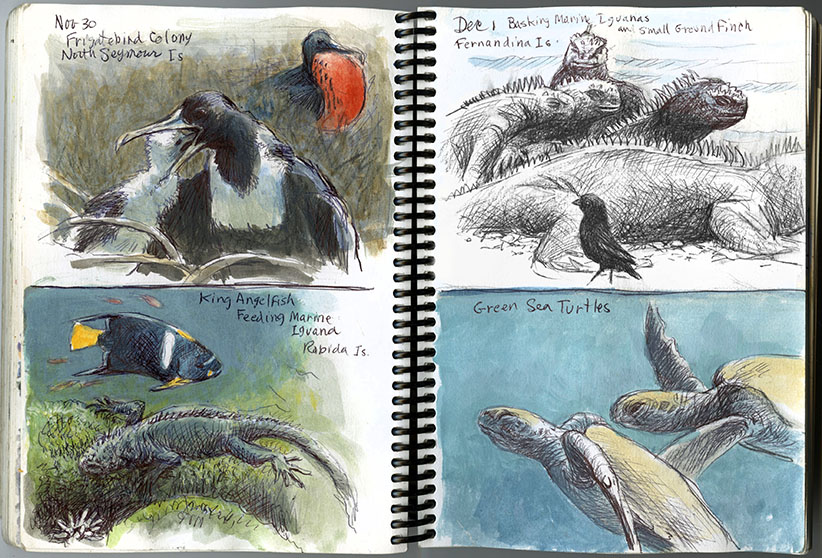 It is cooler than you would expect on the equator, when you are perched on the black rubber pontoon of a Zodiac, dropping into the sea. There are 65 or so of us—travellers, as well as guides and naturalists, gathered at Punta Vicente Roca, a dive site in the Galapagos, as the afternoon sun blazes overhead. Our faces go into the water and—wow!­—there they are, the Pacific green turtles. We were told that we might see about 60 of them in that one small bay. These great marine carapace do not seem to notice us joining them. They slowly paddle and rise up to take a breath at the surface as if we are not in their way. They are benign and oblivious and we move aside.

As far as they are concerned, we are not a part of their world. We look up and see a Galapagos penguin swim up in front of us and propel itself out of the water onto the rock outcrop. Above the surface of the water, several more, along with some brown pelicans, are perched on the black lava rock. They don’t seem to care even when we swim very close. It’s like being in a zoo, but so much better.

Before my first visit to the Galapagos, 35 years ago, I was excited at the prospect of seeing this mysterious island chain and its famous wildlife. I wanted to capture it in my paintings and my books. Immediately upon my first encounter, however, I was so taken by its beauty that I realized that to truly capture the Galapagos, we must preserve it. I have since made it part of my mission to protect nature’s best work. The Galapagos showcased what was possible if humans did not interfere but protected such wonders. 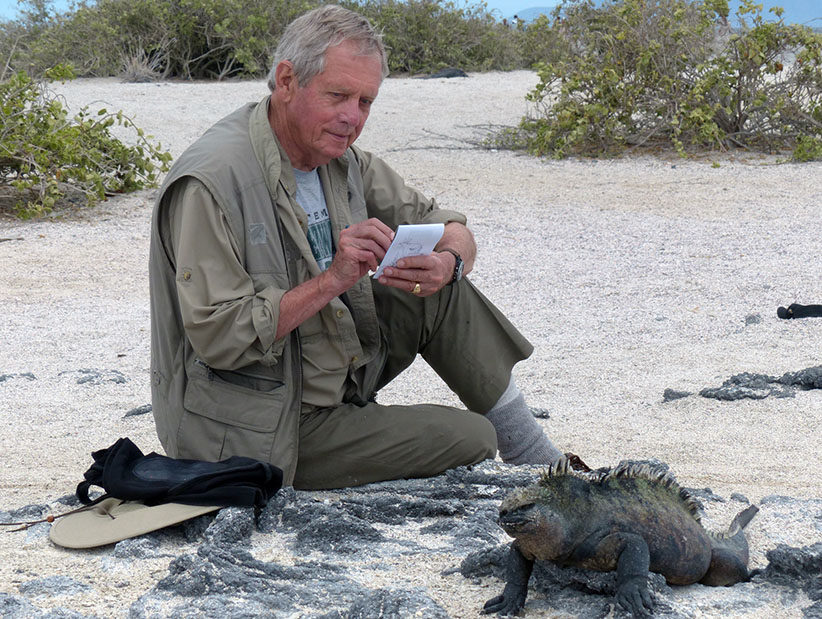 My first trip was with Lars-Eric Lindblad himself. This father of adventure travel—he was the adventurer who pioneered exotic tours to Antarctica, remote parts of Africa, Easter Island, and yes, the Galapagos—had years earlier collaborated with the Bishop of Quito to have those special islands set aside as a world treasure. They are now a UNESCO World Heritage Site. For the benefit of the future of humanity, not to mention the wildlife, the Galapagos are now among the most scrupulously protected places in the world.

Now I am back, playing host to a group of Canadian travellers. Although there were more than 30 years between my trips, I can see that wildlife is continuing to flourish, and, in fact, some areas are improving, thanks to hundreds of staff and volunteers from a host of organizations. Elsewhere in the world biodiversity is in terrible peril—some 16,000 species around the world are in danger of extinction, according to the Suzuki Foundation. But what has been accomplished in the Galapagos demonstrates what humans can achieve when we set our minds to it.

We, the North: Life on the Arctic Circle

Photos: A vivid kingdom of the spineless

This expedition, organized by Lindblad Expeditions (Lindblad died a decade ago, but his son, Sven, is continuing his father’s work) along with an enterprising Canadian company specializing in active and luxury holidays called Vision Travel, is a hands-on experience. Our mostly Ecuadorean guides and naturalists are knowledgeable in zoology, but also botany and geology, and every evening there are lectures and recaps to summarize what we’ve seen and experienced.

Each island has its own personality. Although the islands are virtually on the equator, migration and breeding patterns of the birds vary according to the time of year. Since June to December is the nesting season for blue-footed boobies, we were able to photograph some nesting on the ground and also saw them flying every day or doing their dramatic diving and fishing at sea. There was also an abundance of Galapagos shearwaters. 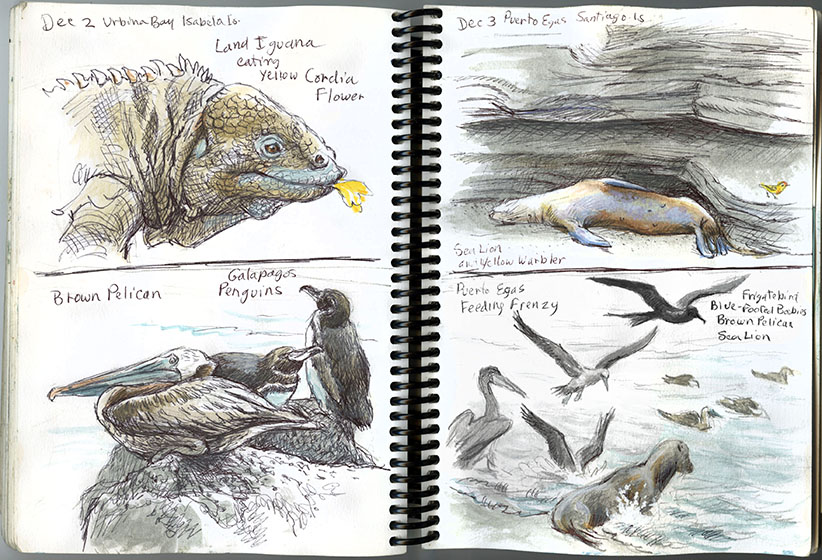 On day two, we had intimate views of a huge frigate bird colony and that afternoon were snorkelling amongst a multitude of fish, including razor surgeonfish, several magnificent king angelfish, and the well-camouflaged giant hawkfish. But the most dramatic of all was the white-tipped reef shark. There is something about being in the water with sharks; it’s always a privilege to see them.

Toward the end of the trip, we visited the National Park headquarters and the Charles Darwin Research Station on Santa Cruz to view the Galapagos tortoises, from the adorable hatchlings to massive mature adults. Those legendary animals captivated Charles Darwin almost 200 years ago. They are still our most iconic reminder of the incredible diversity of the natural world, and the need to preserve it.