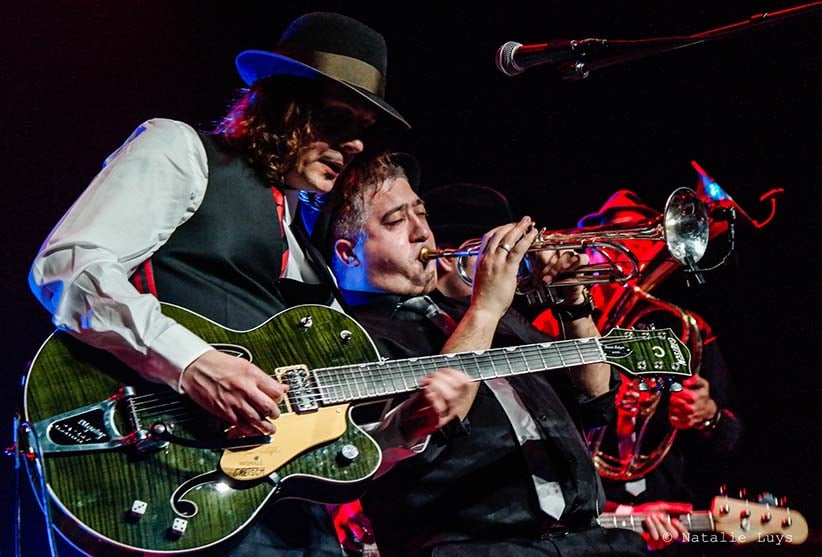 If you don’t ask, you don’t get. Basic advice, but it paid off for Adrian Raso. In 2012, the unknown guitar-store owner from Guelph, Ont., had made five (largely ignored) albums of music that ranged from metal shredding to rockabilly to Latin styles to gypsy jazz influenced by Django Reinhardt. But he’d recently fallen in love with Balkan brass music, so he cold-called the biggest Balkan brass band in the world: Fanfare Ciocarlia, who have sold hundreds of thousands of records, known for playing their unique regional take on Roma folk music at breakneck tempos, spitting out 16th notes at 200 beats per minute (not unlike, say, speed metal guitarists). The subsequent email exchange was more than surprising: the band didn’t just want to guest on a song or two, but instead proposed recording a full album of Raso’s songs in Toronto during four days off tour.

Their 2014 album together, A Devil’s Tale, even featured Raso’s name above the band’s; it topped European world-music charts, won critics’ prizes, and a European tour together showcased the guitarist’s songs and skills to hundreds of rabid fans a night. Meanwhile, here in Canada, Raso’s fans number in the dozens. Some of those are his guitar students.

It’s not the first time Raso has snagged some star power. On 2011’s Nina del Sol he wanted his drummer to do something akin to Sheila E., the longtime percussionist for Prince, a childhood hero of Raso’s. The drummer, frustrated by Raso’s high expectations, threw down his sticks and taunted the guitarist to hire Sheila E. herself. Raso took the bait: he emailed her management and sent her the track; she loved it, and recorded a solo for him at her home studio. “As soon as you have Sheila E. on your credits, everyone wants to play with you, basically,” says Raso, who’s since worked with members of the Stray Cats and pop metal group Extreme.

Meanwhile, the members of Fanfare Ciocarlia know what it’s like to be an unknown musical master in a small town. They hail from a northeastern Romanian hamlet where goats outnumber people; there, they were discovered 21 years ago by an East German named Henry Ernst, who was making field recordings of local music. He thought he’d stay for a couple of hours; he stayed for three months. That’s because upon arrival he was immediately welcomed by 25 brass players, from teenagers to grandparents, who started playing “music I’d never heard before in my life,” he says. “This music was so strong, it was such a wall of sound, performed at a speed I couldn’t believe.” He assembled 12 players for what would become Fanfare Ciocarlia. He started a record label and management company, Asphalt Tango, to promote the band.

In the mid-2000s, Balkan music had a brief mainstream moment, with Western bands like Beirut and Gogol Bordello utilizing the sound; the hit 2006 film Borat featured Fanfare Ciocarlia doing the strangest version of Steppenwolf’s Born to Be Wild you’ll ever hear. (They also do a mean version of the James Bond theme.)

“When I first heard them, I thought they were digitally manipulated,” says Raso. “I thought no brass band could play that tight and that quick.” They could, of course, and they still can—their 20th anniversary album, Onwards to Mars!, came out in April—but what appealed to them about Raso’s project was it was a chance to move beyond their traditional sound. “After playing 20 years the stuff people want to hear from you, you eventually get bored,” says Ernst. “This was a chance to jump into a project that was a bit different.” Before Raso, the brass band didn’t normally slow down to waltz tempos, and their frenetic rhythmic accents don’t exactly swing. Furthermore, they had never played with a full drum kit, a bassist and two guitarists: the result of yet another cold call, Raso is joined on guitar by John Jorgenson, who toured in Elton John’s band for six years.

Raso introduced the Romanians—who speak only the most broken English, and don’t read music—to his favourite Western influences. “Being a Prince fan, I was telling them about the funk horn players I grew up listening to. They didn’t get exposed to that stuff, being in the village where they’re from. The records would never have got there. I love it when they ask me, ‘Tell me about this Tower of Power.’ They weren’t even exposed to electric guitar very much, and now they’re doing air guitar moves live.”

Two years after touring The Devil’s Tale in Europe, Raso and Fanfare Ciocarlia finally have Canadian dates this month and next, including the major jazz festivals in Montreal, Ottawa and Toronto—as well as the Italian Canadian Club, an unassuming banquet hall in Raso’s hometown. They plan to make another record, this time with guest vocalists. In the meantime, Raso won’t be playing local gigs with any substitute players. “No disrespect to people here, but I’m not going to find a Western player who can come close to playing in that Balkan style; the phrasing is so unique. And guys here simply can’t play that fast.”