From 2016: The little town that became a CanRock Valhalla isn't entirely the Hip's oasis—but its true beauty reveals itself one star at a time 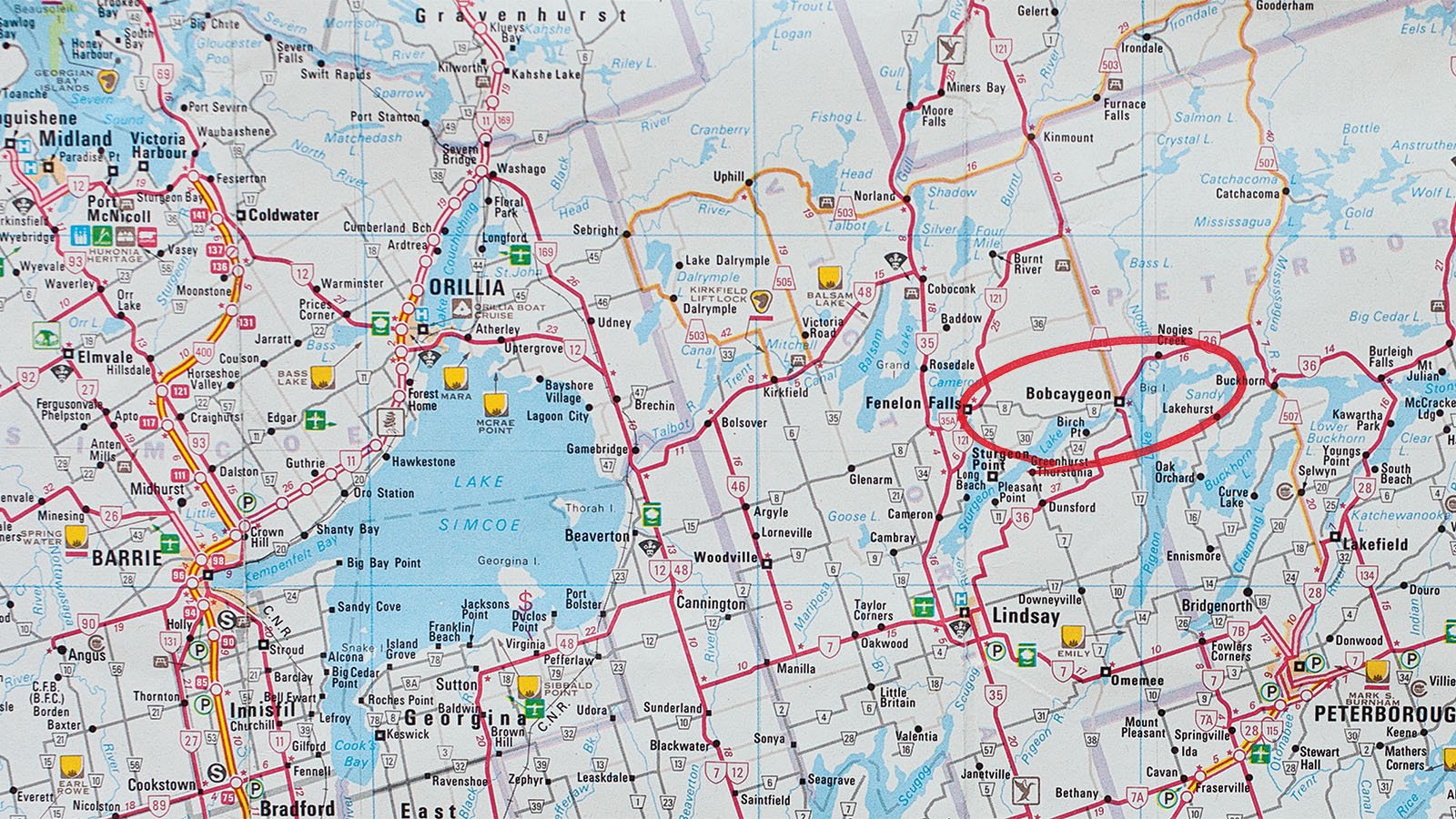 It’s a bright, sunny June day in Bobcaygeon, Ont.—one of the first beautiful weekends in what this area calls “the season,” as if there is only one, the one that brings the tourists and the cottagers. But the day’s charms are dimmed somewhat for Kathleen Seymour-Fagan, whose attention is focused on a different light, one that has lingered at red for too long, allowing cars to inch over a bridge in fits and starts.

“They really need to fix the traffic lights,” she says, squinting as a line of cars waits to cross the bridge, one of two entryways into town. The Bobcaygeon councillor for the City of Kawartha Lakes—the town was amalgamated in 2001, hoovering up six villages and the town of Lindsay—has other things on her mind, too: there are provincially mandated growth rates to meet, costs to maintain. Even the limestone upon which the town is built is causing trouble, creating potholes and sinkholes.

If this all seems like any other small town—well, it is. But it also isn’t, because this is Bobcaygeon: a town woven into the fabric of the Canadian imagination by the Tragically Hip. It was in “Bobcaygeon” that a little town a two-hour drive from Toronto at the mouth of a mighty lock system that spiders between two Great Lakes became the idealization of a small-town getaway, and a kind of CanRock Valhalla. It was in “Bobcaygeon” where the Hip arguably reached the peak of their powers—and, as the band embarks on one final tour later this month, in the wake of frontman Gord Downie’s diagnosis of terminal brain cancer, it is a town pausing to consider what it all means.

“I’ll be driving in, and it’ll be a beautiful night, and that song comes on,” says Seymour-Fagan. “And it’s like . . . yeah.” She lets out a wistful sigh. 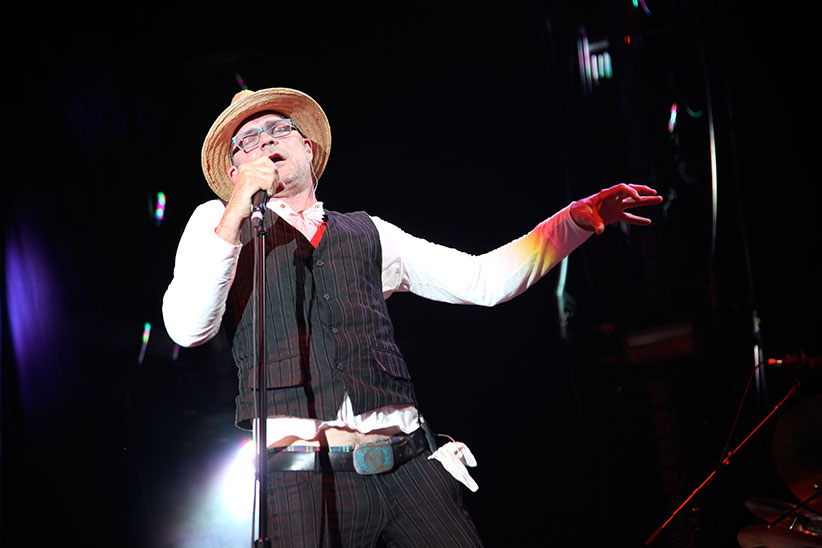 That song. All minor chords and major lifts, “Bobcaygeon,” the anthem from the Hip’s 1998 album Phantom Power, has become one of the iconic Canadian band’s signature tracks. In it, Downie’s protagonist—an OPP officer, in the music video—leaves a house in Bobcaygeon, blurred by country music and wine, and returns to Toronto, with its despair-inducing job, its dull, “hypothetical” sky, its riots. So he returns to that Bobcaygeon home, where he begins to breathe easy again and slowly unspool his stresses. It’s a paean to a simpler life, the kind of comfortable myth that a country as spacious and folksy as Canada likes to tell itself.

It’s not the first time that Bobcaygeon has tapped into Canada’s cultural wellspring. Local legend suggests that 400 years ago, New France’s iconic founder Samuel de Champlain may have strode through, collaborating with the Huron and Algonquin on what would be a failed raid on the Iroquois. He was struck by the verdant area—in his diary, he called it beaubocage, meaning beautiful woodland and heath—a word that found itself in its name. In the 1830s, it was settled by migrants from England, Ireland and Scotland; it once served as the home office for the Boyd Lumber Company’s North American operations, which had supplied timber to the British Navy. And the town, too, became the first anchor point of the Trent-Severn Waterway, a marvellous 386 km stretch of modern engineering, connecting Lake Huron and Lake Ontario. And if you’re looking for a houseboat, look no further; it is the province’s houseboat capital.

But if Canadians know of the little village of Bobcaygeon at all, odds are it’s because of the Tragically Hip’s song.

MORE: ‘Life’s too short for bad coffee.’ An interview with Gord Downie 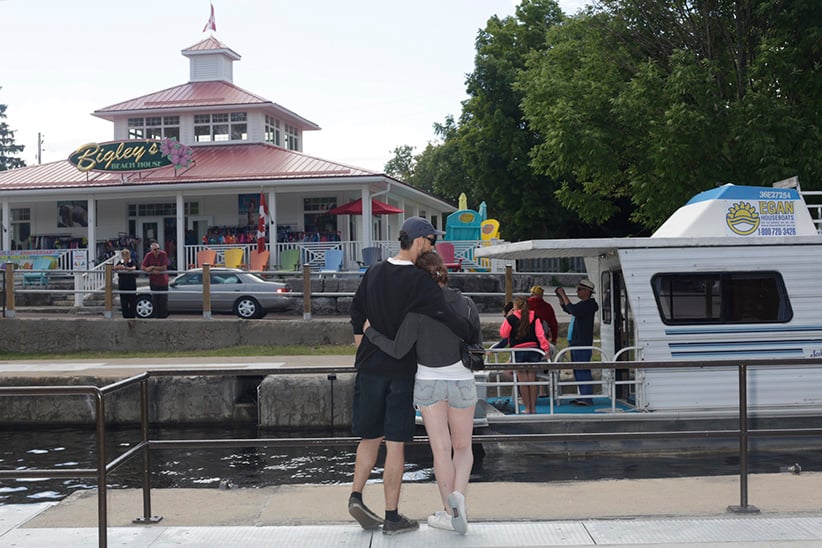 “It did a lot of good for the town—it put Bobcaygeon on the map,” said Terri MacKay, an employee at Bigley’s, the town’s family-run retail engine, a sprawling palace that stacks shoes and swimwear the same way your favourite bookstore crams paperbacks to the rafters. It’s humming this weekend; there’s a sale on at the store, which promises “big city fashion in a cottage country atmosphere.”

“There’s a sense of pride—and thinking about Gord Downie, I get a bit weepy,” MacKay says, admitting she is a few notches down from super fandom. Her co-worker Clay Craig agrees: “It’s going to be a loss when that man goes.”

“The song sort of sealed the deal for us,” said Sacha Douglas, 41. She and her husband Bill moved here after 15 years in Toronto and started Douglas + Son four years ago; hawking vintage industrial wares and a charmingly salvaged aesthetic, the shop would be at home in one of Toronto’s hippest hoods. “It would fly in Toronto, for sure,” she says. “We were choosing between a bunch of different places, but I feel like here, we got the inside track.”

The Hip surely helped their choice. “There was something about the lore of Bobcaygeon. The song brings so many people into town.” Her husband’s a diehard, who knows every lyric. But is she a Hip fan? “Well, as much as every Canadian is,” she says. 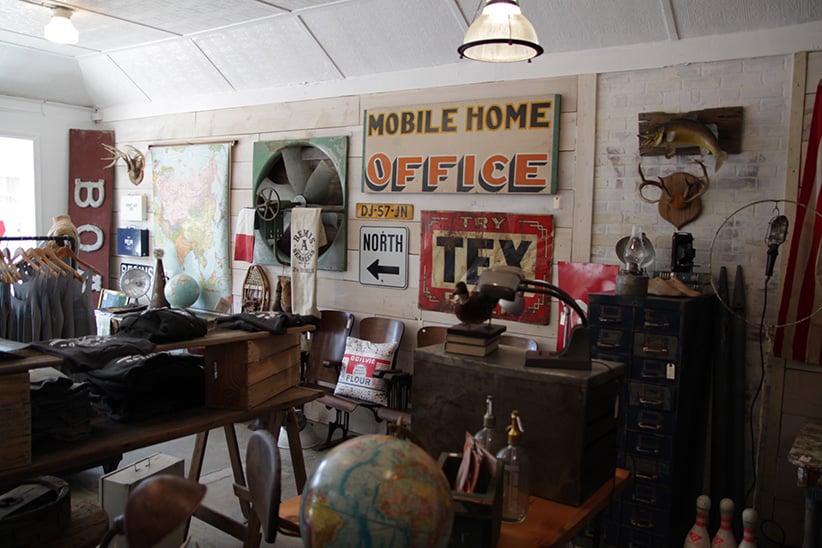 “Not a lot of people ask for ‘Bobcaygeon,’ ” admits Merle Gibson, a jovial 60-year-old who has hosted a sleepy karaoke night at the local legion for the last 500 or so Fridays. Here, regulars bring their own CDs from home, and the rules printed on the song binders deliver karaoke commandments—“thou shall not twist and shout louder than the singer,” “thou shall not start a fight.” Indeed, “Bobcaygeon” is not among the 12 Tragically Hip songs listed in the binders, but Gibson insists he has it in his stacks; he says someone requests it about three times a year.

There’s something a bit fitting that for many in Bobcaygeon, the relationship to the song is somewhat hypothetical, like the Big Smoke’s skies. After all, Downie himself has admitted he didn’t choose the town for any specific reason. “You could use any small town, really,” he said in 1998. “Bobcaygeon rhymes with constellation . . . sort of.” (Representatives of the Tragically Hip did not respond to requests for comment.)

“There really isn’t a romantic, beautiful reason they wrote that song as far as I can tell, and as far as we talked about it,” said Andy Keen, who directed Bobcaygeon, a concert doc about the Hip’s sold-out show there in 2011—a Heritage Moment equivalent of Roger Waters playing The Wall in Berlin. Keen and crew interviewed roughly 25 locals—and although they appreciated the song, “they were a people who didn’t really have too much of a relationship with it. It became this soundtrack for them, but also for so much of cottage country in this province and this country.”

Indeed, even if it resonates widely, the Hip’s mythical Bobcaygeon no longer quite exists, if it ever really did. It’s not a place that offers a clean break from Toronto—these days, it’s a town infused with the big city.

Just last year, Douglas’s well-attired Toronto-feeling shop moved from the edge of town to its marquee spot on the main strip, next to the Foodland. Port 32, an outcropping of luxury retirement homes, has begun to pop up near the legion. Recently, shops offering up big-city buzzwords have joined the generally pun-filled retail offerings: an artisanal grilled-cheese sandwich store and a Mexican-themed organic direct-trade coffee shop alongside a fish-and-chips restaurant called Just for the Halibut, as well as Cajun Tanz, a curious cottage-country mix of a tanning salon and electronics store. Kawartha Lakes’ latest tourism data says 1.1 million visits generate nearly $90 million in spending, with a desire to grow that number by offering “authentic Ontario rural experiences.” In that context, the city’s tourism planning document calls Bobcaygeon, a town of roughly 3,500, an “urban centre.”

“It was a bit closed before—a little bit of a rural community. But it’s really become a hub and a hotspot,” says Seymour-Fagan, a born-and-raised Torontonian who moved to Bobcaygeon 15 years ago and started that organic coffee shop five years after that. 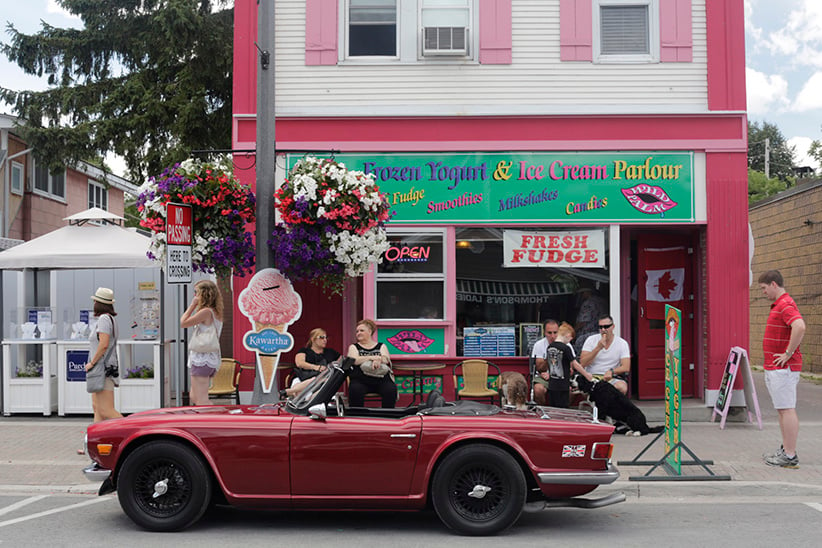 It wasn’t always so peaceable. Seymour-Fagan remembers cottaging near Bobcaygeon growing up, and how locals and cottagers would fight “almost every day” at a bar called the Doctor’s Office. Brian Junkin, a Bobcaygeon lifer and a Kawartha Lakes councillor representing the northern, sparser portion of the town, remembers the troubled ’70s and ’80s, when the town’s population spiked and locals were getting nervous. “Some young people from the GTA came up and were camped along the Little Bob River,” he says with a little laugh. “Some of the local fellows went down and ran them out of town.”

But even Junkin, the fifth generation to live on his Bobcaygeon family farm, favours more development and growth. “It’s changed a lot since I was very small, and there were growth pains for a while, but we definitely accept the summer visitors and the influx of retirees—it’s a good thing. There will be more development in Bobcaygeon. And I haven’t heard anything [about it] from people in my ward, not in my time on council.”

But frustrations do still bubble. Longtime residents like Gibson take issue with an amalgamated city they see as sapping towns of their successes to patch up tougher-luck places. “They take our best fire trucks, take them to Lindsay. That was our blood, sweat and tears that went into it, but that’s amalgamation—ruined it for the locals,” says Gibson. Sewage and power bills are higher than ever before; on the main bridge, a sign splashed in urgent red calls for a peaceful protest over Hydro One costs: “ENOUGH IS ENOUGH! CAN YOU HEAR US NOW?” 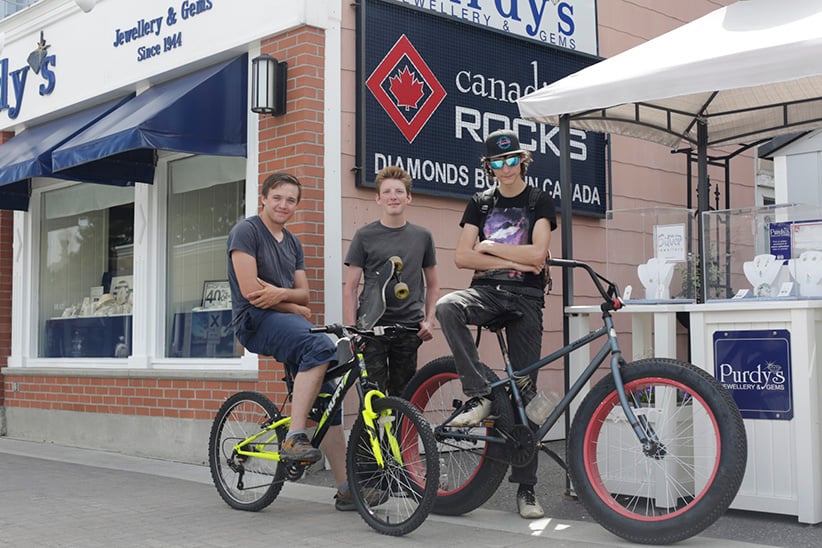 Bobcaygeon, that small town of CanRock legend, is a real place; with reality comes real issues. It’s not the simple paradise offering a clean break from the big city; it’s a place still working through its own identity, with all the mundane stresses of rising bills and the desire to be better—and bigger—than it already is.

But even if Downie didn’t intend it, there’s still something truthful about the song. “It’s a warm bunch there, and a beautiful place,” said Keen, who says the people he spoke to for his film still keep in touch. “They’re just proud. But are they proud because of the Hip song? I think that’s just in addition to being proud of their town.”

And that becomes truer, as you drive away at night from the unhurried traffic light and the town behind you, turn off by the legion and the retirement homes, and pull onto Highway 36, looking up at the diamond-encrusted dark. “I was sitting out just last night on my deck looking at it,” said the longtime local Junkin. “It’s beautiful,” says Douglas, the shopowner. “It really is, coming from the city, you don’t see stars until you come up here—and now every night, I come on the balcony, it’s beautiful, and it’s true,” says Seymour-Fagan. “Everyone’s really happy here. Even if you have to wait a long time for the [traffic] light.”

In the coming months, Seymour-Fagan says she’ll put forward a motion at Kawartha Lakes council to rename a Bobcaygeon street after the Tragically Hip. They’ll put something on the sign welcoming people to town, too, she says. “Where the constellations reveal themselves one star at a time,” she thinks.

Even if the name merely sort of rhymes, they got the sky right.