Jason Markusoff shares two stories showing what the late Leonard Cohen means to him—in the hopes you'll share yours, too 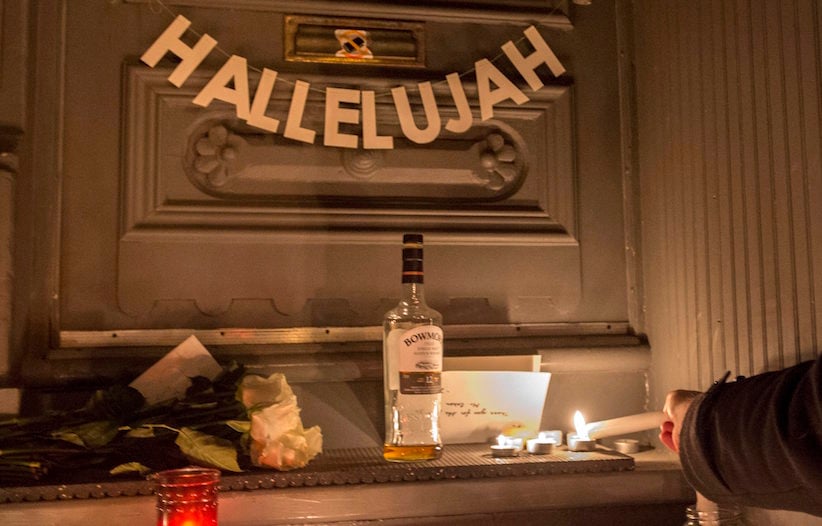 A man lights a candle in front of the home of legendary singer and poet Leonard Cohen Thursday, November 10, 2016 in Montreal. Cohen has died at the age of 82. (Paul Chiasson/CP)

And clenching your fist for the ones like us
Who are oppressed by the figures of beauty,
You fixed yourself, you said, “Well never mind,
We are ugly but we have the music.”

When a loved one dies, our most cherished moments with that person rush towards us. When a beloved songwriter dies, our favourite songs and lyrics emerge softly, silently through our lips and hearts. When I learned that Leonard Cohen has passed, my mind was filled with memories of loved ones and the Leonard Cohen songs we shared.

In those moments after, late in leaving my office, I tweeted a fragment of one such personal recollection. I learned quickly that many friends and many more strangers have vivid tales of their own to share. Few men, or writers of any gender, conveyed feelings of passion and seduction and romantic rapture the way Cohen could.  So many of us have intertwined Leonard Cohen lyrics and moments of fervent love—or, at times, what can, in a glance or raised eyebrow, mistaken as love. “If I am dumb beside your body/while silence blossoms like tumours on our lips/It is because I hear a man climb the stairs/and clear his throat outside our door,” he wrote in “Poem,” from his first collection in 1956.

Maclean’s would like this space to become a repository for Canadians — and other Cohen fans around the world — to share those memories when one of Montreal’s finest gifts to the world stirred us in head and heart and elsewhere. Please email them to letters@macleans.ca and we’ll share them here (provide your name and location, preferably). You can also leave them in the comments below.

I’ll start, with a pair of recollections.

MORE: Maclean’s final profile of Cohen, on an album grappling with mortality

The first came in my first year at Carleton University. I had met a second-year anthropology student through our shared love of klezmer music (that’s another long story). I was a saucer-eyed 18-year-old living in residence, my first time away from my parents and Hamilton; Jen was sophisticated, extremely well-read, and knew of much more interesting things to do than bad teenage drinking at campus pubs. One Sunday evening, she brought me to her friends’ apartment above the old Rasputin’s Folk Club. Ben and Mike made Greek dinner, and Scott brought a bottle of ouzo. After dinner, wine, and much of that ouzo bottle, they brought out instruments: a fiddle, a bouzouki and an acoustic guitar. After some Balkan and Jewish instrumentals, and more of the ouzo, we started singing: first, Stan Rogers’ “Barrett’s Privateers.” Then, “Closing Time” by Leonard Cohen, with a lyric sheet printed off Mike’s computer, and the whole damn place went crazy twice. We sung with such joy and such lung force that we probably sent music down through the floor boards and into the folk club below, reversing the typical nightly flow. It was a night I wish didn’t have to end, but we all had classes. I knew I didn’t want to let go of any of those people anytime soon, to never stop singing Leonard Cohen songs drunkenly with Jen and her brilliant friends—the sort of rich, whole-hearted musical experience that in my youth I never fathomed. We didn’t date for many months longer, but have remained good friends, 17 years on. She was in a stalled New York subway when this news reached her, and me at work in Calgary, when I sent Jen a message, expressing gratitude for how she enriched my love for Leonard. In a difficult week, especially on her side of the border, we hung on tight to this memory from Mike and Ben’s apartment.

The other came several years later, when I was backpacking on my own through Europe. I was in Berlin, and went solo to a bar near Zoo Station, where Canadian songwriter Martha Wainwright was playing. Ordering a drink at a bar, I struck up a conversation about what beers to order with a woman named, as it just so happens, Suzanne. She was much older, from Toronto, and she had just ended an amateur photography exhibit a friend mounted for her in nearby Heidelberg.

We were small-talking, and casually enjoying Wainwright’s strained voice and songs of hard love, heartbreak, a stomping song where she curses her father. Then, she began singing Cohen’s “Tower of Song.” Wainwright, it turns out, grew up in Montreal near Cohen, and as a child was friends with his daughter. “And I’m crazy for love, but I’m not coming on…” And here I was, on my own more than an ocean away from my Edmonton home, and there Suzanne was, on her own more than an ocean away from Toronto, and here we were at a Berlin bar listening to a Montrealer sing the words of a fellow Montrealer. Canada couldn’t have possibly felt closer at that moment, and I never loved the world more. Suzanne and I walked the city of Berlin all through that night, and it ended early in the morning the way that Leonard Cohen would have wished it to end.

Those are my stories. And now, if you will, it’s your turn. Help me celebrate the love and lyric of Cohen by sharing your stories.