Coming to a theatre near you: The world's greatest museums

The latest thing in cinema might also be the oldest thing: Stunning all-access tours of galleries and museums 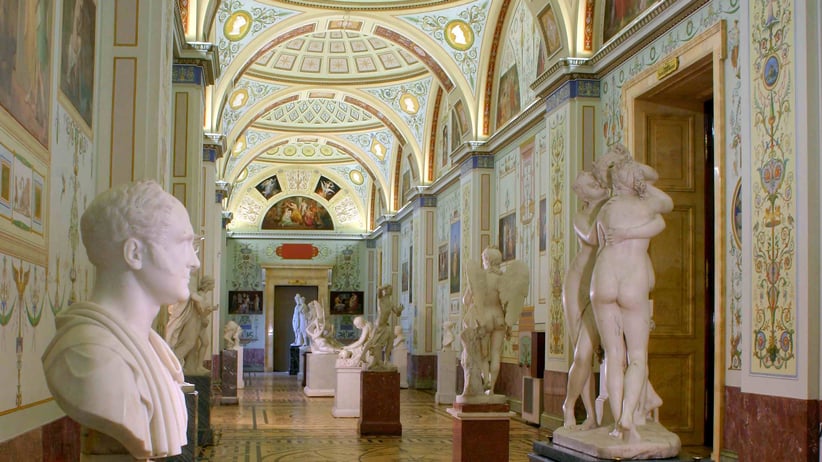 Tucked amid the space flicks and Oscar-worthy dramas hitting Cineplex theatres this time of year is a nine-part documentary series devoted to exploring museums and art galleries. Following on the success of live opera and theatrical broadcasts in cinemas, it’s the new trend hitting movie houses—and one that offers art lovers, from Nanaimo, B.C., to St. John’s, N.L., a chance to be culture vultures without buying timed-entry tickets and battling crowds blocking the view of that must-see painting, which is often in another part of the country or even on another continent.

The In the Gallery documentaries, which run until May, explore blockbuster exhibitions, such as the David Bowie one that left the Art Gallery of Ontario last year and the Matisse show at the Museum of Modern Art in New York­, as well as centuries-old institutions themselves, including St. Petersburg’s Hermitage and the Vatican’s museums.

They also offer unparallelled access. In Hermitage Revealed (in theatres Nov. 16 and 19), director Margy Kinmonth goes behind closed doors to see cameos and carved jewels kept in 18th-century cabinets purpose-built for Catherine the Great, then travels down to the cellars, where curators and their families lived during the Nazi siege of St. Petersburg—places strictly off limits to the public. “A camera can immerse you in a place in the most extraordinary way,” she says.

Though Kinmonth—an award-winning director known for crafting powerfully evocative, yet highly enjoyable documentaries (Naked Hollywood, as well as Russian-based works Mariinsky Theatre and Nutcracker Story)—was asked by the Hermitage to do a film for its 250th anniversary, she couldn’t secure financing until it was clear this was something that would command premium pricing.

It was back in 2012 when Cineplex and other movie chains aired Leonardo Live, a film directed by Phil Grabsky about a rare gathering of Leonardo da Vinci’s paintings at the National Gallery in London, which had sold out. Grabsky’s documentary became a “release valve,” says Brad LaDouceur, Cineplex’s vice-president of event cinema, that allowed frustrated art lovers to see the exhibit. It was also a surprise hit. While theatres discovered a previously untapped source of revenue, museums quickly recognized the value in such so-called edu-tainment films.

In the newly released Vatican Museums 3D, viewers are treated to close-ups of the Sistine Chapel that separate each layer of the complexly arranged frescoes into easily explained Biblical stories not apparent to visitors in Rome craning their necks to see Michelangelo’s masterpiece. “I can’t think there’s a better canvas than on a 60-foot screen in a movie theatre,” says LaDouceur.

LaDouceur expects Kinmonth’s creation to be this season’s standout, in part because of its topics: royalty, intrigue and revolution, intertwined with one of the world’s largest, most important collections, and housed in a spectacular palace. In Hermitage Revealed, she delves beyond the museum’s masterpieces to explore its turbulent history, including the 45 curators who perished in Stalin’s gulags. When the documentary was shown in Italy, it outsold every other movie.

Cineplex isn’t expecting that sort of immediate success here. “Are they busting the doors down? No,” LaDouceur admits. “It’s new territory.” Still, he expects the films will find their own niche, noting that, eight years after it first started broadcasting Metropolitan Opera events, Cineplex sold more tickets on the first day of the opera’s current season than in all of its first year. Like other special showings, the documentaries aren’t in theatres for long; most are on-screen for two nights and command higher ticket prices, around $17.

Kinmonth is getting used to the new opportunities. Since her last documentary, Royal Paintbox, about artists in the house of Windsor, hit British cinemas before TV, she’s taking no chances with the one she’s currently editing about artists on the battleﬁeld. Although War Art, featuring actor Eddie Redmayne (The Theory of Everything) has only been sold for TV, she wants to make a big-screen director’s cut. Just in case.