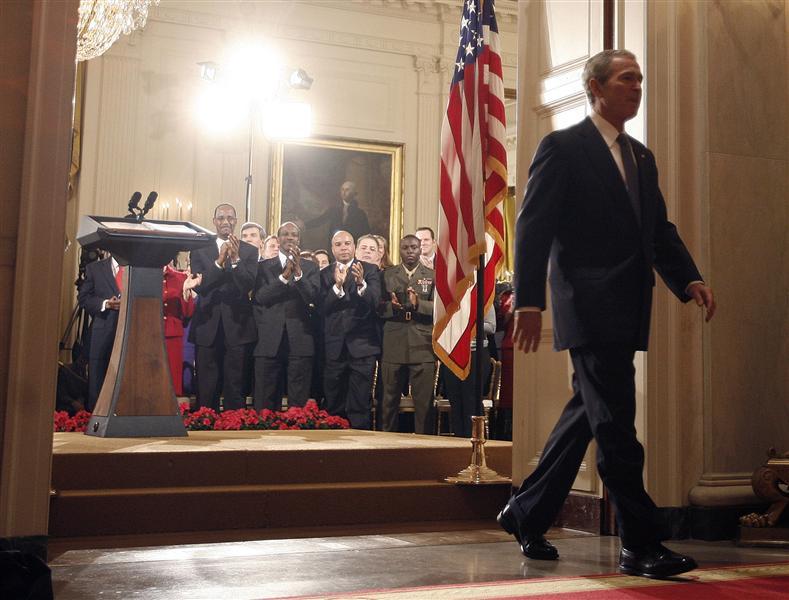 Welcome to Six Ways to Sunday, your weekly digest of the things in pop culture and news that matter, from this weekend and beyond.

The seminal politics show The West Wing – a show so potent that it inspired vast numbers of young people to get involved in politics, according to Vanity Fair – wrapped up in 2006 and in many ways, it was a rebuke to the George W. Bush presidency that was going on at the same time. It was a hopeful, progressive oasis in a time where wars were ongoing in earnest and leaders were more given to hemming and hawing than decisive action and regal oratory. In its final scene, after seven years, President Jed Bartlet (played by Martin Sheen, who I can’t see as anything but the president, anymore) flies home to New Hampshire, his reign complete, and as he stares out the plane, the now-former First Lady asks what he’s thinking. “Tomorrow,” he answers, and it’s equally hopefully and oddly sad, because for a show that so cleverly illuminated the backrooms of the White House and the internal dialogues of the political game, we (and he) have no meaningful idea of what comes after you stop being the most powerful man in the world.

Fast forward to today, and curiously enough, that helps inform how we should engage with the art exhibition by the very same president that viewers sought refuge from, George W. Bush. When his paintings were released, leaked as the result of a hacking plot, they generated a fair bit of interest and some divisive response. The Guardian’s art critic wrote that his Putin portrait “looks like something you would find in one of America’s trash-rich Salvation Army stores and buy to laugh at”; meanwhile, Bush’s polling data is actually up as a result of this humanizing project.

So in that way, it’s easy to be suspicious about this effort as a way to banish demons, dissipate ghosts, and cleanse the blood of the wars that started during the Dubya years. Displaying them as part of a new art exhibit, too, makes it feel like an attention-drawing mechanism.

But, as ever, context feels key, and this feels like the honest effort of a man trying to do something with all the time in the world. President of the United States is always the last job ever taken by the people who inhabit the role, and it doesn’t matter whether you’re reviled or beloved when you leave: finding projects is vital. No matter what we think of Bush the man, allow Bush the painter – only outed, again, from a digital incursion – the ability to take up a new hobby. Winston Churchill, too, took up painting, and wrote the slim essay Painting as a Pastime, which Bush himself read. It’s unsurprising that the war-starting president was inspired. “One begins to see, for instance, that painting is like fighting a battle; and trying to paint a picture is, I suppose, like trying to fight a battle,” Churchill writes. “It is, if anything, more exciting than fighting it successfully. But the principle is the same. It is the same kind of problem, as unfolding a long, sustained, interlocked argument. It is a proposition which, whether of few or numberless parts, is commanded by a single unity of conception.”

Chances are, Bush II will never be, as he hopes, Rembrandt. But no matter how tantalizing the opportunity to see this as a portrait of a divisive figure, and regardless of our feelings towards him, let’s be sure to keep the artist distinct from the art, and let George W. Bush fill his tomorrows with whatever canvas battles make him happy. His political legacy, the one that matters, will write itself, no matter what paint he chooses (or which Wikipedia photo of Stephen Harper he’s inspired by.)

It’s unclear why, in the short-ish lifespan of this weekly feature, baseball’s New York Mets have qualified twice as your outrages of the week, but let’s just say it’s because of the market there and call it even. This week, as Opening Day brought new hope and optimism to baseball stadiums around North America, a brouhaha brewed in Flushing Meadows as the starting second baseman, Daniel Murphy, took paternity leave to be with his wife for the birth of his first child, missing two games.

There’s nothing wrong with that, you’d likely say. No one whose job it is to crow on national broadcasting sports networks could possibly have a problem with that! Alas:

Mike Francesca: “You’re a Major League Baseball player. You can hire a nurse to take care of the baby if your wife needs help. What are you gonna do, sit there and look at your wife in the hospital bed for two days?”

Boomer Esiason: “Quite frankly, I would have said C-section before the season starts. I need to be at opening day, I’m sorry.”

How utterly depressing that sports broadcasters would decry a man for putting his family over sports (especially Esiason, whose own son has cystic fibrosis, and devotes his time for good reason to caring for his son as well as fundraising and charity efforts). To his credit, Esiason has apologized. But the fact that this controversy even occurred shows just how far behind the insular sports community can be to the standard pressure of the plebian world. Paternity leave is an increasing reality in a tough economy; not only are these blowhards callous, they’re also incredibly out-of-touch. Let’s play ball.

3. HOMESTAR RUNNER GETS AN UPDATE

For an internet comedic video series that came out before everyone and their mothers had one, Homestar Runner doesn’t really get its due. Its use of pop-culturey non-sequiturs and oddball animation was ahead of its time; some say it had an inspiring hand in the massively popular “doge” meme. Needless to say, with podcasts and merchandising and multiple spin-offs, this series that started in 2000 is shockingly popular, making its website’s first update since 2010 (on April Fool’s Day, no less) a fairly momentous occasion, especially on the Internet, which the show made its comfy home. It’s not much, but it’s enough to give folks hope that more could be on the way.

It’s one of the most anticipated releases of the new slate of TV series, and the first seven minutes of Fargo is available online to get you excited. It features Martin Freeman (how many things that can one guy be in?), Bob Odenkirk, and an almost unrecognizable Billy Bob Thornton. And don’t worry, fans of the Coen Brothers’ film–this is a logical expansion of the world depicted by the movie, and was developed with Joel and Ethan. No need to get your head caught in a wood chipper.

5. IN MEMORY OF ROGER EBERT

Roger Ebert, a man who helped herald a new era of film criticism, died a year ago this week. He was smart, funny, and made a once-obfuscating area deeply accessible; he is very much missed. Indiewire unearthed this excellent half-hour TVO interview with the man about the history of film criticism, the various media thereof (print vs TV), and what it means to be a film critic today.

Vermont’s governor says that the state has a “full-blown heroin crisis.” Since 2000, the generally bucolic state has seen an eightfold increase in those seeking treatment for opiate use. What the heck is going on? Rolling Stone is on the case, and delivers this incisive feature about the new face of heroin.