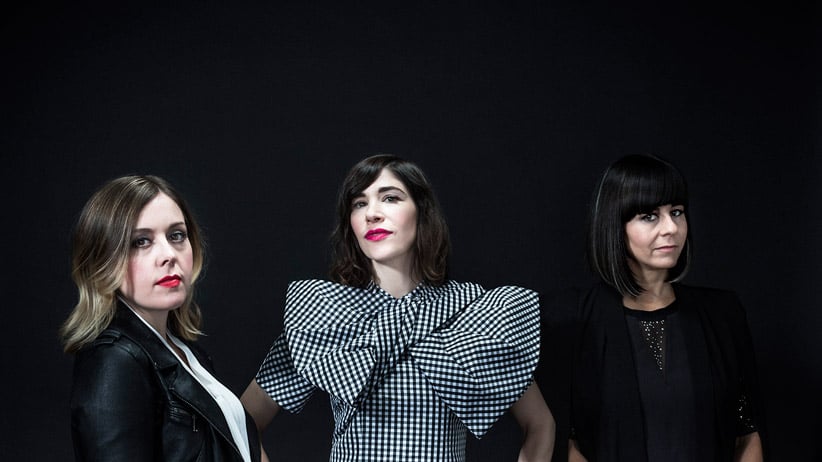 Sleater-Kinney have never done anything half-assed. When the Portland, Ore., punk band first floated the idea of reuniting after a nine-year absence from the stage—which resulted in the new album, No Cities to Love—they all had plenty of other fish to fry. Carrie Brownstein is the co-creator and co-star of the hit sketch comedy TV series Portlandia, now entering its fifth season. Janet Weiss is an in-demand session drummer, and has a day job working on Portlandia as well. Corin Tucker is a mother of two and has released two solo albums since Sleater-Kinney’s hiatus. If they were going to revisit the band that forged new paths for feminist punk rock in the ’90s and ’00s—a band that was a mentor to and influence on everyone from the White Stripes and Black Keys to the Yeah Yeah Yeahs—it was not going to be with a few shows full of old hits. It was not going to be with a token album of new material as an excuse to get back on the road. It was certainly not because the members of Sleater-Kinney had nothing better to do. It had to be worth their while.

“We wouldn’t be satisfied if it wasn’t quite as good as our other records,” says singer/guitarist Corin Tucker. Songs were rewritten and pulled apart: standards were much higher than they would be for Tucker’s solo records or Wild Flag, the band with Brownstein and Weiss that ran from 2011-14 (producing one self-titled album, in 2011). Four songs were ditched at the last minute to make a concise, 10-song statement that stands as the towering achievement in the band’s eight-album discography. “Sleater-Kinney is a bigger band than any of us,” says Tucker. “It has a bigger weight to it, for the meaning it has to other people. There was definitely the possibility that it might not come together. We knew that. We didn’t record until we felt we had a lot of material ready to go.”

The reunion was kept a secret from the outside world. Naturally, many of the band’s friends in Portland knew what was up, but there were no reports of fans lingering outside Tucker’s basement windows during rehearsals hoping to hear one of the world’s greatest rock bands woodshedding new material. “People in Portland do not care,” laughs Tucker. “Our neighbours are like, ‘You and your basement band—great.’ Half the parents at my daughter’s school are in a band, or running their own food cart or doing something different. It’s no big deal in Portland.”

It is a big deal, however, to not only the band’s older fans, but a new generation who never saw Sleater-Kinney live. Tucker—plain-spoken, modest and composed in person, as opposed to the force of nature she unleashes when she howls on stage—is pleasantly surprised. “We didn’t know how people were going to feel about us being a band again, or how relevant it would be to people’s lives. It turns out that people, especially young women, are so passionate and excited to have us back.”

Their arrival coincides with perhaps the biggest uptick in young feminism since the riot grrrl movement of 1991-94 that birthed Sleater-Kinney, thanks—or no thanks—to renewed talk of “rape culture,” among other less than cheery headlines. This time, however, riot grrrl’s descendants aren’t necessarily wielding guitars or performing spoken word or assembling zines. They might not be writing tirades against misogyny. They might not be singing new anthems—a fact addressed on a new track called No Anthems: “I’m not the anthem / I was once the anthem / that sang the song of me / but now there are no anthems / all I can hear is the echo, and the ring.”

Riot grrrl today, says Tucker, “could be anything. It could be performance art. It could be that girl at Columbia University who carries her mattress to every single class to express how she feels about the rape case there. The whole idea was always that feminism would be a tool for women to use, and that riot grrrl was just another mutation of that, a language that we created because it suited us better at the time. Hopefully young women today will take that idea and mutate it however they need to use it themselves.”

In the meantime, Sleater-Kinney are using the oldest tricks in the rock’n’roll playbook and proving there’s plenty of life in this power trio: not just for who they are, at the age they are, or for from what scene they originated, but as a standard-bearer for a band of any stripe. “I think we have something that is unique,” muses Tucker. “Otherwise, why would we still be a band?”