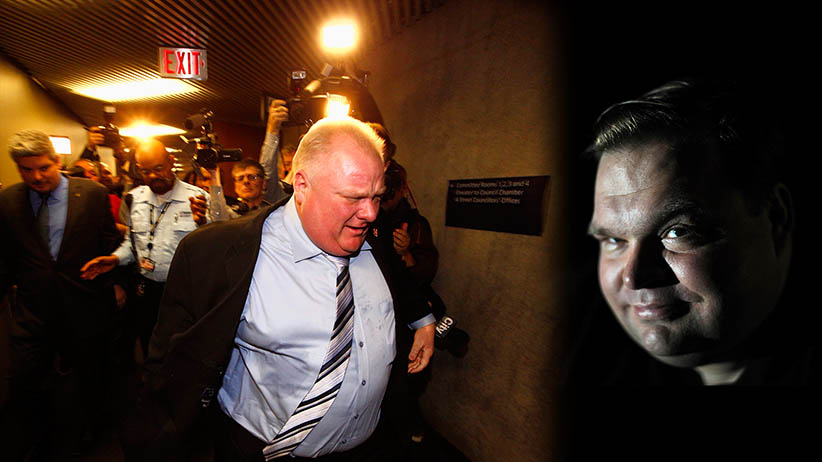 There’s not much to read into with the titles of his work, insists monologist Mike Daisey, but he very literally did dream of Rob Ford, even before he began digging into the Toronto mayor’s political legacy for his latest show, Dreaming of Rob Ford, opening in Toronto’s Big Picture Cinema on May 21st.

He doesn’t recall the details of the dreams—”they’re all fragments and visions,” said the 38-year-old, in a phone call from New York—but they’re vivid enough in feeling to have inspired the show. “I think there’s something about him that reminds me of Fatty Arbuckle, reminds me of slapstick–the way he moves sometimes. Maybe it’s just the preponderance of GIFs that have been created, where he’s moving on his own or he’s been sped up or he’s been made to look like that crazy chipmunk that turns its head. There are so many ways that his image has been manipulated and shifted that he becomes like a cartoon template. So I think it’s some synthesis of those things that makes him a figure for me.”

While he notes that he hasn’t quite built the Rob Ford show yet, what Daisey finds interesting about Ford isn’t merely the jesterly quality that has provided fodder for  late-night hosts and comedians, but rather the way  his story has been consumed and spread—he’s interested in what Rob Ford can tell us about ourselves. “I feel like a lot of the Rob Ford story that isn’t told revolves around how the media plays the story of Rob Ford,” he said. “What interests me is the way that the media machine feeds itself, in the way that stories become scandal and how they propagate. I’m interested in the framing, and our complicity—both the media and the people who read the media are implicated in the story.”

Over the course of his 17-year career, Daisey, a raconteur, has crafted monologues—unscripted works driven from a basic outline—that thrive on a kind of cognitive dissonance that is as fascinating as it can be uncomfortable. In one, he looks at how Disney World and the Occupy movement relate; in another, he relates the story of Ayn Rand to the meaning of authority; most notably, and controversially, he’s gone to Apple’s Chinese factories to explore the hidden cost of the technology we enjoy every day.

His upcoming show about Ford promises no less. “The media does have its knives out. Not because they have anything against him, but because they actually want to eat him,” Daisey says, with a laugh. “To be a meal for the media is an unpleasant experience.”

Daisey should know. In 2010, he produced that notorious Apple monologue, The Agony and Ecstasy of Steve Jobs, a one-man show that was cast as a non-fiction piece, based on what he himself saw at Apple’s factories in China. The show was adapted for radio by NPR’s This American Life; it was hailed for its incisiveness and the galling nature of the conditions he claimed to see. He began speaking as an expert to the media, from an op-ed in the New York Times to Real Time With Bill Maher to Techcrunch—that is, until it was revealed that parts of it were exaggerated or simply made up. He spoke to fewer workers at fewer factories than he claimed to have visited; he told NPR fact-checkers that it would be impossible to reach his translator. When they tracked her down anyway, she said they did not see security guards with guns, or a Foxconn worker with a ruined hand touching an iPad for the first time, or a group of workers poisoned with n-hexane.

So then, the ensuing brouhaha: This American Life retracted the entire episode, releasing an uncomfortable interview with host Ira Glass where Daisey was forced to admit some of his falsehoods. He’s been lambasted nearly unanimously online for the deception, and for his less-than-apologetic appearances afterward; eventually, Daisey did apologize fully. He’s done six monologues since, but it’s impossible to get past this ugly chapter. The storyteller has been trapped, in a way, by his biggest story. That narrative now hangs like a shadow over Dreaming Of Rob Ford: is the performance, in effect, a liar doing a monologue about a liar?

“I’m aware people like that word, and mostly because it gives them a sense of moral superiority. This, despite the fact that I’ve known no one in my life who is not a liar,” said Daisey, his voice darkening, the sentence reminiscent of a Ford-favoured talking point about imperfection. “It makes people feel really good to get to say it about someone.”

Daisey is well aware of what he calls a “hunger for people to draw connections” between him and Ford. He slams a recent New York Times story that he said went out of its way to compare his face to Ford’s large visage, down to the gestures. But he’s loath to draw the connections himself, in the show: “I actually think it’s more interesting to implicate the people watching the show [Dreaming of Rob Ford]. I don’t know if it’s inherently interesting to talk about it as if the story is about me.”

If there is any comparison to be made, he argues, it’s one that’s merely skin-deep. “I feel like a lot of the connecting between us is for the most obvious reason: fat bigotry. I’ve seen it before. If I talk about someone who’s large, there’s this instant interest that I’m speaking about someone who’s large,” he said. “I always assume that must be part of the mix, the belief that inherently before you know anything else, you must be lazy and pathetic and of low and worthless moral character. It really is the most popular form of bigotry we have: you can do it constantly and you can connect it to people’s wilful failings. People love doing it, and nothing stops them. I can only presume that’s what makes lots and lots of people dislike Rob Ford.”

Whether or not that is true, what is certain is that there is no end to the stories about Toronto’s mayor. Even in the Toronto Star, the latest report about a wild, Bacchic night from March didn’t make it onto the front page, an indicator that coverage has reached a kind of apex, and that following revelation after shocking revelation, our ability to be shocked—or for our own opinions to shift—fades away.

Daisey has made his peace with his own infamy. “I’m not actually sitting dourly in front of a computer confronting every hater that I see and trying to personally kill every one of them. I only do that on Wednesdays and Fridays,” he says. “I am not currently suicidal. The show itself and the things I try to address, I like to think have a thread of humour running through them.”

But he says suffered from being a condemned “media construct” despite seeing his story effect positive change in Chinese working conditions since The Agony and Ecstasy. “The level of privilege is so high. You would think that I had robbed them of their childhood, that I’ve ruined everything for them,” he says of the criticism. “They never understand that because in part of all the attention and focus and everything that happened, workers at Foxconn make more money now. They don’t understand any of the complexities of all the things that actually played out. They never investigate anything that actually happened. They just know that they f–king hate me. And I take it. That’s what it’s like.”

That’s what might prove to be most remarkable about what Dreaming of Rob Ford could be; Daisey, who lives with his crucifix, might be exactly the right person to offer fresh perspective on a figure we believe we’ve already figured out. Sympathy may not be what we come up with, but daring to have the perspective to see a person as a human remains a valuable experience. Despite Daisey’s hesitation to draw the comparison, maybe a little comparison is actually a good, instructive, artful thing.

Dreaming of Rob Ford is the headlining show of Toronto’s East End Performance CRAWL, presented by Crow’s Theatre from May 21 – June 1. Tickets can be purchased at www.crowstheatre.com.