Tehran's hidden cache of art treasures comes to the West

An incredible and seldom-seen modern art collection, full of Warhols and Picassos, leaves Iran for a tour of the West, starting with Berlin 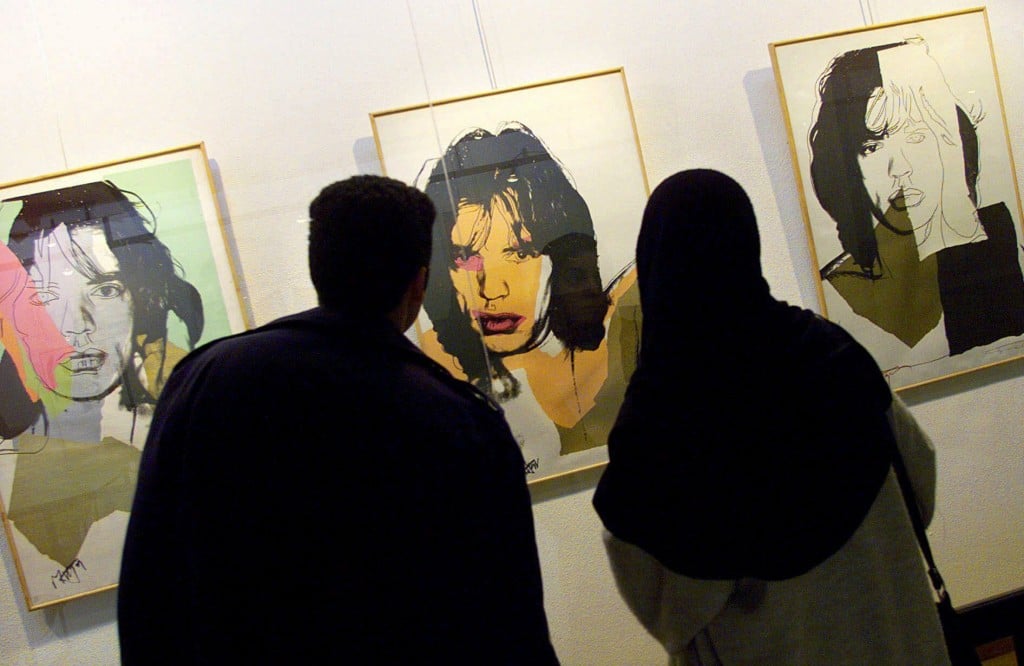 Iranians look at Andy Warhol’s portraits of rock star Mick Jagger during an exhibition of Pop Art at the Museum of Contemporary Art in Tehran, Iran, Feb. 20, 2000. (AP photo/Enric Marti)

The art world loves a good backstory. That’s why one man’s stuffed shark is worth $12 million and another’s … not so much. It would be difficult to come up with a much better backstory for the blockbuster exhibition coming to Berlin next fall, when 30 of the 20th-century Western art treasures of the Tehran Museum of Contemporary Art will be presented along with 30 works by contemporary Iranian artists.

The Tehran Museum has the finest modern art collection outside the major centres in Europe and North America. Gathered under the personal supervision of Empress Farah Pahlavi Shahbanu in the mid-1970s before the 1979 revolution toppled the monarchy—years during which the rise of OPEC made Iran flush with oil cash and the international art market depressed—its gems include works by Warhol, Monet, Gauguin, Jackson Pollock and Francis Bacon, some 30 Picassos and a pair of nine-figure Mark Rothkos.

When the Shah of Iran fell and Ayatollah Khomeini took over, the museum’s art professionals fled to the West, and it fell to one man, a high school graduate who worked as a driver for the museum, to protect the collection. Firouz Shahbazi, now the “keeper” of the Western art, says he spent two years sticking by the vault in which he placed the threatened artwork, refusing to open it for anyone. “Only God knows where I got this courage from—I, who am normally so afraid,” he told Bloomberg News. “With this vault, with this museum, I am like a lion.”

For decades after that, the collection was buried by Tehran’s chilly relations with the West. Pieces occasionally made their way to museums, but as a collection it was seldom seen by anyone outside Iran. Germany was the Western nation that moved the fastest to restore links with Iran in the wake of last summer’s nuclear accord. It has thereby reaped the rewards, commercial and cultural.

News of the Berlin deal, announced in late October, immediately set off a race in the world of museum exhibitions. Within weeks, while its Frankfurt competitor, the Schirn Kunsthalle, dropped out of the running—because “the amount of money requested became an insurmountable issue,” according to its director—Rome’s MAXXI museum, as the Museo nazionale delle Arti del XXI secolo is known, announced it will pick up the Berlin exhibition in early 2017. The Hirshhorn Museum and Sculpture Garden in Washington, part of the Smithsonian Institution, opened preliminary discussions with the Tehran Museum. “We received a number of requests,” said an understated Ehsan Aghaei, deputy director of the Tehran museum.

The news also sparked myth-making. Curious journalists went to Tehran to see what the fuss was about and returned with tales of masterpieces locked away and forgotten for almost four decades. Not quite. The early years after Khomeini’s anti-Western revolution were dicey, and even by the most sober of accounts Firouz Shahbazi deserves his accolades. But the worst was over by the early 1980s and the art was essentially safe from revolutionary destruction. Some among the ruling authorities took a shine to it, more probably appreciated its value. Some of the art went on occasional display. In 2004 one of the most provocative, and valuable ($75 million), masterpieces, Bacon’s 1968 triptych, Two Figures Lying on a Bed With Attendants, travelled to the painter’s native Britain. Back in Tehran the next year, the work—full of naked men—was put on display by a brave curator, Sami Azar. (In authoritarian Iran, sensitivity about nudity and homosexuality, especially given that the Western artists were often gay or Jewish or both, is liable to keep many pieces in the vaults.) The Ministry of Culture and Islamic Guidance ordered it taken down. Azar demanded the decree in writing, successfully delaying officials until the British ambassador could see it that night.

Starting next year many of the works will get more exposure than they’ve had since the 1970s, but that won’t happen only to the Warhols and Picassos. What the exhibitions will really bring out of the shadows, notes Iranian art historian Shiva Balaghi, “is the treasures of modern Iranian art” never before seen outside the country. “And that will show how modern art was being made in a world that was connected and in dialogue.”