The Aga Khan Museum: An oasis on the outskirts of Toronto

North America's first museum for Islamic art is a stunner—and something of an outsider. Given its mission, that's just fine. 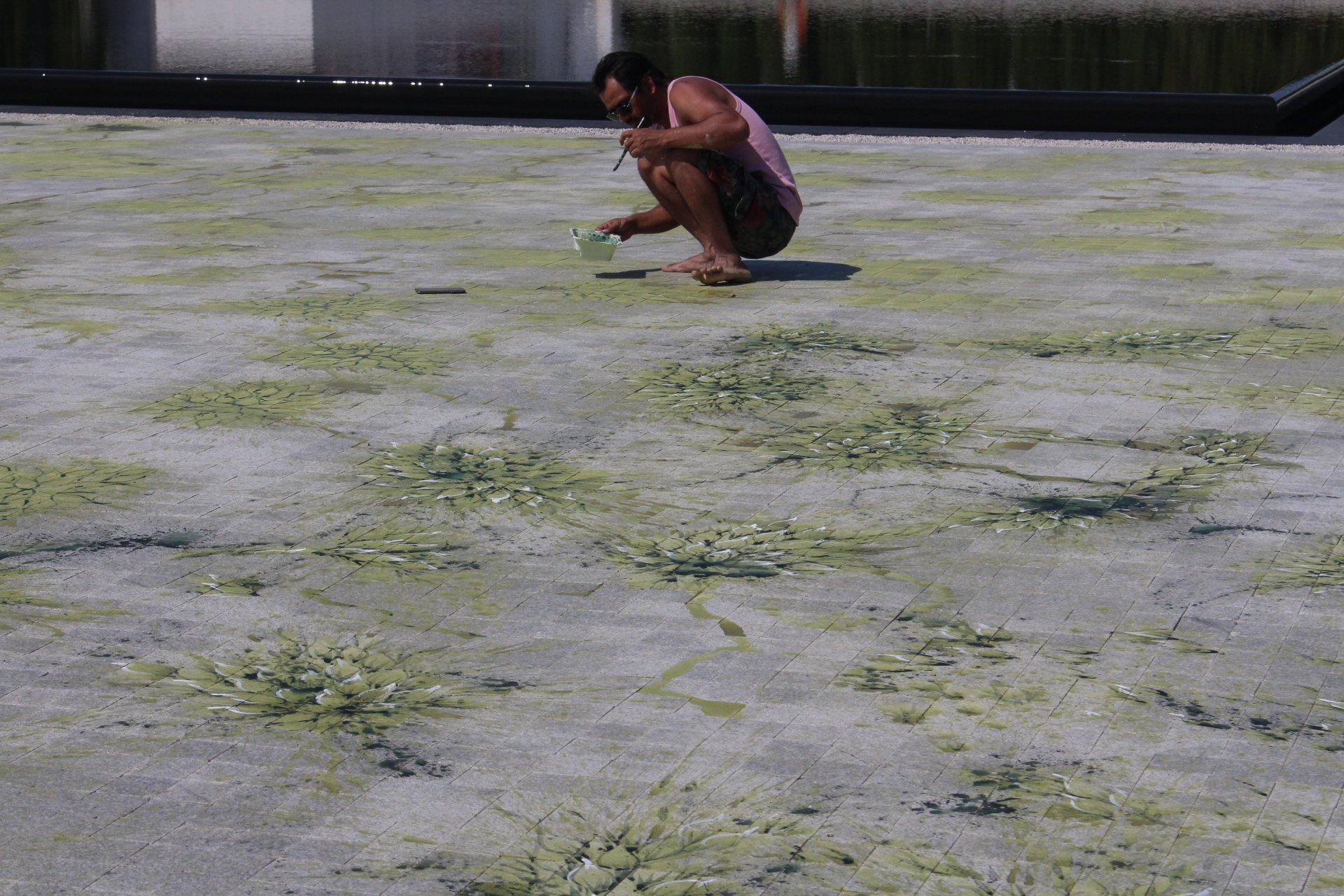 Imran Qureshi, an Iranian-born miniaturist, works on his decidedly macro outdoor floor mural for the exhibition The Garden of Ideas: Contemporary Art from Pakistan. (Photo by Adrian Lee)

There’s something inherently urban and urbane about museums, and that’s certainly the case in Toronto. The Royal Ontario Museum, with its stern, Romanesque revival mien juxtaposed with its newer crystal addition, divides the red-brick varsity distinction of the University of Toronto on its west from the swish modern Bloor Street shopping strip to its the east. Meanwhile, the ever-evolving Art Gallery of Ontario reflects its place, all modern lines and glass facades designed by Frank Gehry sitting wedged between the up-and-coming Baldwin Village neighbourhood and the clattering bustle of Chinatown. Both those institutions—alongside smaller museums like the Bata Shoe Museum, Casa Loma, Design Exchange, Museum of Contemporary Canadian Art, the Museum of Inuit Art, et al—are thoroughly central downtown engagements.

So in that way, already, the Aga Khan Museum—set to open on Sept. 18 as North America’s first monument to Islamic art, and founded by its namesake, the founder of the Aga Khan Development Network (AKDN) and imam of the Shia Ismaili Muslims—is an outsider. The museum, a gleaming white Brazilian granite crown, sits just off the Don Valley Parkway in a suburb eight kilometres outside of the city proper, a good half-hour bus ride from the nearest subway station. Nearby, retirement towers with neat gardens and shiny high-rises stand like obelisks amid a modernist bloc of corporate offices of either sallow taupe or glittering blue.

But that distance, and its distinction from its surroundings, is all part of the museum’s appeal. “The idea of an oasis—the sense that, once you enter it, you’re in a different place—is very much a part of the overall desire,” said Henry Kim, the museum’s director. He cites Al-Azhar Park in Cairo—another AKDN project—as a place that takes you outside the stresses of the big city. “It’s amazing—suddenly, your day changes from being in the middle of noise and crowds, and suddenly you’re in an open space.”

Toronto was the second choice for the museum’s location—planning permissions squashed plans to build it in London, on a prime downtown plot just outside the Palace of Westminster—but now, the pleasure of this open 6.8-hectare campus is what drives the museum’s sensibility, and the amount of space informs the building’s design by Pritzker prize-winning architect Fumihiko Maki, hand-picked by the Aga Khan. With the lush gardens and the five burbling reflective pools outside its front door and its inner-sanctum, open-air courtyard—entered from inside the building and ringed by walls of glass and wooden latticework so that light from outside projects dancing shadows into the museum over the course of the day—it is clear that this is a labour of love.

The museum brought in an all-star team to usher in this unique creation, from Kim, who was responsible for the major redevelopment of the University of Oxford’s Ashmolean Museum, to Adrien Gardère, an esteemed museologist who has worked at the Louvre in Paris. One section of the permanent exhibit features illustrated pages from the Shah-Nameh, the Persian book of kings and heroes, and includes an isolated “sound shower” reading of its pages. The museum, positioned at exactly 45 degrees solar north so that every surface receives sunlight over the course of the day, boasts a facade that is gridded in precise metre-long blocks of Brazilian granite from top to bottom. Kim says the Aga Khan, an architecture aficionado, was so involved in the process that he himself selected each iridescent granite cube that went into the building. Lebanese-Serbian landscape architect Vladimir Djurovic’s public gardens were inspired by the ones in ancient Persia and Spain, right down to his decision to eschew acrylic paints, which would lack the long-term lustre of those historic spaces. They are telltale, loving flourishes befitting the ground-up founding of an entirely new building, devoted to Islamic arts.

“Starting from scratch, tailor-making this to what we want, that’s the real joy,” said Kim. “The challenge, of course, is getting the museum known by people.”

That’s where a tight focus will benefit the museum, and a tight focus it will have: celebrating art from Muslim history, an especially crucial task at a time when news cycles are dominated with war scenes and upheaval in the Middle East. The fact that there aren’t as many museums in Toronto as, say, London, will draw art lovers to the Don Mills suburb, says Kim, and will benefit the main mission: teaching non-Muslims about the oft-hidden nuances of Islam and its rich, diverse history.

The challenge, then, is to accurately reflect Muslim cultures, when there is no single, simple experience. “This is unprecedented. We’ve never had in any country a museum with this diverse a set of populations—Lebanese, Persians, Pakistanis, Egyptians, and more—all living in one city with one institution that represents them all,” said Kim. “There is the tendency among museum curators—and I’ve been guilty of it in the past—of creating exhibitions that are kind of like buffets. You take a little bit from different countries and you add it all together and call it an exhibit about pilgrimage or faith or something. It’s a great way of being cross-cultural, but the problem is it doesn’t focus on one culture over another; it’s being a little bit too fair.”

So instead, a new tactic: the museum will go community by community, starting with Pakistani contemporary art, heading into China then Mughal India then Iran, among others, cycling through these places and cultures every three or four months so that all communities are represented within five years—a hyperactive pace in comparison to the languorous, nearly year-long exhibition rate espoused by most museums. “This will allow them to celebrate what is likely to appeal to specific communities, and really engage.”

Another strategy is to make the collection relevant through the performing arts, with the goal of hosting concerts and festivals showcasing Muslim-Canadian artists, as well as an artist residency program for young Muslims. “I grew up in Vancouver, and one of the things I would have really loved would be a public space where I could see my own cultural practices reflected, where I could proudly share my heritage with my friends, and find my own identity. That would have been a powerful thing for me,” said Amirali Alibhai, the head of performing arts for the museum. “Finally—a place where I can take my children or my grandchildren and share something of my cultural heritage with them, and where I can learn something new as well.”

Indeed, while the building is something of a beautiful monolith—all smooth-edged and minimalist—it cannot be a monolith in its core mission: bringing the diversity of Islam and its oft-underseen artwork to Muslims and non-Muslims alike. “In a museum that comes from the Aga Khan Developmental Network—a network that believes in pluralism and peace amongst nations and amongst people—I think our collections reflect that,” said Linda Milrod, the head of exhibitions. “There’s going to be a lot of people in Toronto who will see themselves in this museum in a way they have not been able to see themselves in other museums before. And that’s going to feel really good.”

So if the museum is something of an outsider, then, well, good: that attitude might just be ideal for the place to succeed in its mission to bring people inside.