Shake it off: These will be the happiest Grammys ever

Forget Islamic State, Ukraine and Ebola. For the Grammys, it's the year of relentless optimism. 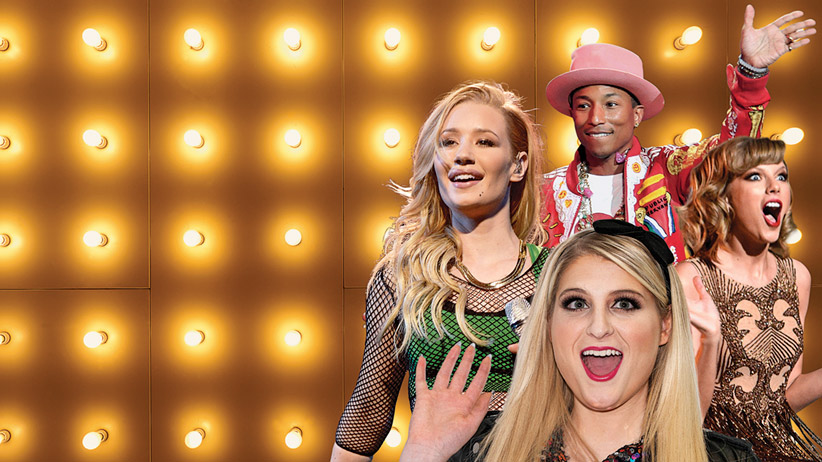 “Just think: while you’ve been getting down and out about the liars and dirty, dirty cheats in the world, you could have been getting down to this sick beat.” Thus speaks Taylor Swift on the breakdown of Shake It Off, the perky first single from her 2014 album, 1989. When the song was released last August, the American public, fed up with bad news, decided they agreed. Shake It Off went in at No. 1 on the Billboard Hot 100, and Swift’s sanguine, non-confrontational message—“Haters gonna hate, hate, hate, hate, hate”—became a slogan for a year of pop music where conflict was taboo.

Self-esteem is a pronounced theme in the nominations for this year’s Grammy Awards. Along with Shake It Off, Meghan Trainor’s positive-body-image anthem, All About that Bass, is up for Record of the Year and Song of the Year, while Iggy Azalea joins them in the former category with Fancy, on which she raps, “Can’t worry ’bout no haters,” while her featured guest, Charli XCX, belts out, “Feels so good getting what I want!” Meanwhile, Pharrell Williams’s spring-of-2014 smash Happy (technically released too early for this year’s Grammys but sneaking into the Pop Solo Performance category with a newer live recording) declares: “Here come bad news talking this and that . . . Well, I should probably warn you I’ll be just fine.” And in Let It Go, from the ubiquitous Frozen, up for Best Song Written for Visual Media, Idina Menzel (as Snow Queen Elsa) announces, “I don’t care / What they’re going to say / Let the storm rage on . . . no rules for me I’m free!”

Ever since 2003, when the post-9/11 process of collective healing had started to dissolve, the awards have each year given one or two high-profile nods to songs declaring cultural dissatisfaction, flirting with danger, or at the very least consumed by angst. But the 2015 ceremony, to be held on Feb. 8 in Los Angeles (and televised on CityTV), will offer no equivalent to the Black-Eyed Peas’ state-of-the-nation Where Is the Love, the Dixie Chicks’ unrepentant Not Ready to Make Nice, Lorde’s anthem for the 99 per cent, Royals, or even Macklemore and Ryan Lewis’s inclusionary but “right-wing conservative”-baiting Same Love. So much good cheer abounds, it’s almost as if 2014 was not the year of Ebola, Islamic State, Boko Haram, Malaysian Airlines, Ukraine, Ferguson, Mo., and a new Cold War.

This year hearkens to the old days, when the Grammys were politically out of touch—in 1967, at the height of the Vietnam War and the Civil Rights movement, both Record and Song of the Year trophies were given to the 5th Dimension’s Up, Up, and Away, an ode to ballooning “along the silver sky” where “the world’s a nicer place.” Has today’s record industry simply lapsed back into escapism, setting aside questions of life and liberty to focus on the pursuit of happiness? Certainly 2014 was a difficult year for the U.S., fraught with racial, religious and political tensions and capped by a midterm election. “Bad news [was] a flood,” says Maura Johnston, writer for the Boston Globe and former music editor of the Village Voice, “and that’s why I think you saw these songs that were more personally empowering than generally empowering.”

Empowerment itself is thornier than escape—there’s more at stake. Johnston sees the roots of last year’s group of songs in more outward-looking hits such as Katy Perry’s Firework, Ke$ha’s We R Who We R, and Lady Gaga’s Hair, all linked with the It Gets Better Project in the U.S., aimed at “giving hope” to LGBT youth. In a prescient tweet in August 2013, Johnston called Perry’s defiantly cheery single Roar “the tipping point from it-gets-better-core to haters-gonna-hatism.” 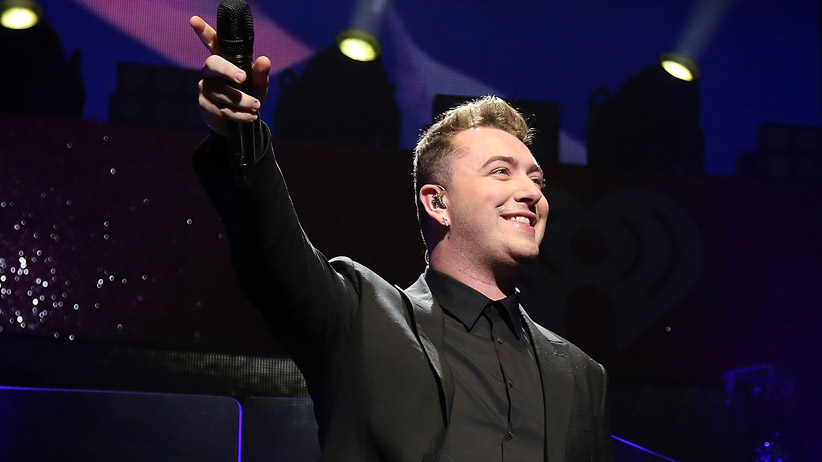 At least Perry, on Roar, looked to scare away her critics; the song’s successors are more lamb than lion. With rock music at a low ebb, shaking it off is nearly the only game in town at the Grammys—and certainly among the non-genre “general field” song nominees. Sam Smith’s presence as an openly gay superstar is historically significant, but his Record and Song of the Year-nominated Stay With Me transforms the messy, emotional aftermath of a one-night stand into a cuddly, gospel-inflected singalong with a choir built up from his own multi-tracked voice.

Related: A Canada-exclusive interview with Sam Smith on feminism and Beyonce

Smith’s security blanket of a song appears to smother anything political; indeed it, and other nominees like Shake It Off and Let It Go (derived from a kids’ movie, but striking a chord with their parents) ﬁt into the much-maligned adult contemporary (AC) format, which is increasingly crossing over into culturally pre-eminent Top 40 radio. Where just a few years ago, club bangers like LMFAO’s Party Rock Anthem topped mainstream charts, now AC has elbowed them aside. The Grammys’ celebration of the format (formerly “easy listening”) can be a sign that the embattled record industry doesn’t want to rattle any cages—after all, AC is often written off as anodyne. And yet, it may serve a purpose: for Eric Weisbard, professor of American studies at the University of Alabama and author of the book Top 40 Democracy: The Rival Mainstreams of American Music, AC songs are “therapeutic, designed [for] an audience that is using music more to manage emotions, have a sense of affirmation, than to rage against the machine.” Hence what Weisbard calls the “what doesn’t kill you makes you stronger” theme, derived from Nietzsche via Kelly Clarkson.

Over the years, says Weisbard, AC has become “the format of working women, who had to juggle responsibilities on the job and at home. What you’re hearing as messages of happiness and afﬁrmation could be understood as messages of control, of getting to a position of peace. I’m always leery of seeing happy music as escapist.”

But Shake It Off-style pop has to do with more than just helping listeners get through the day; it’s also about bolstering the singer’s image. That’s because even though rock’s rebel yell has been dampened by the ascendancy of AC, its focus on authenticity lingers: on one hand, Swift and her fellow pop singers write (or co-write) their own songs and demand to be seen as more than just manufactured pop starlets. On another, in the age of the selfie, they’re holding up a flattering mirror to themselves.

Often they do so in a playful way: Swift’s video for Shake It Off shows her dressing up and trying out various dance styles, from ballet to twerking, before settling on her supposed “normal,” gawky self—a process Johnston explains as, “I’m just going to be the most popular girl in the school and act like I’m put-upon even though I sell boatloads of records and everybody loves me and wants to turn me into GIFs all day.” Swift’s “normality” is crowd-sourced: even her lyric “haters gonna hate” is taken from an Internet meme derived from early-2000s girl group 3LW.

So the “natural” self that both Swift and Trainor present in their songs and videos nonetheless has what Ann Powers, pop music critic for National Public Radio (and Weisbard’s wife) calls a “vintage quality”—the former as a wholesome girl next door who’ll bare her midriff but never her bellybutton, the latter with her candy-coloured doo-wop sweetness. “This playing with artifice has always been something women in pop have done, since the days of 20th-century blues queens, for example, or Josephine Baker,” says Powers. Their performances were “all about entertainment and glamour and theatre, and today it’s still the reality of how women in pop have to operate.”

But Swift and company arguably do so more self-consciously. Sure, they’re focused on self-esteem, and their upbeat music offers a way to escape one’s troubles, but the way they present themselves suggests a cultural savvy. When Iggy Azalea kicks off her rap in Fancy with “First things first, I’m the realest,” she’s making an argument, Powers says, about her skill and ability “rather than [her] natural entitlement.”

Haters gonna hate, nonetheless: Azalea, as a white Australian woman in hip hop, has been widely attacked for cultural appropriation. Swift has been called a “racist” for dressing up as what Salon calls “a caricature of a black woman” in the video for Shake It Off, and Trainor is accused both of “skinny-shaming” and being a “bad” feminist whose self-image is dependent on men’s approval. Even their fellow nominee Sia (up for Record and Song of the Year for Chandelier), who has worked to keep her own image out of the spotlight, is upbraided for substituting a 12-year-old girl in her videos, whom detractors claim is overly sexualized.

Still, none of the artists has backed down. “The hackneyed folk-rock model of the Crosby Stills & Nash song about ‘four dead in Ohio’ ” isn’t the “only model of political music,” says Weisbard. Music can also be “about different types of people claiming a space to perform their identity. And when they do that, it’s often got an element of conflict.” The personal and the political don’t separate easily. Last September, seven people in Tehran were given suspended sentences of six months in jail and 91 lashes for their parts in a homemade viral video of Pharrell’s Happy, which featured women and men dancing together. Says Powers, “Happiness can be a political statement. Declaring your right to happiness can be a form of protest.”