The Interview: Martin Short on joy, death, and comedy 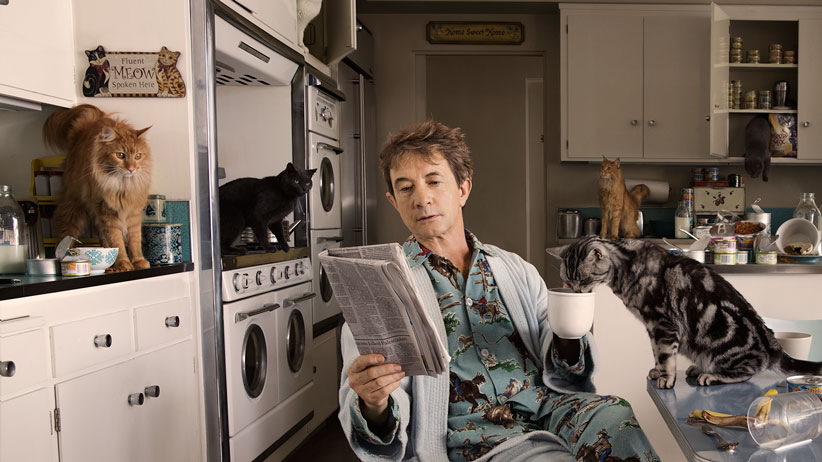 Marty Short is at peace. He’s been to hell and back with the death of his beloved wife, the actress Nancy Dolman, his partner of 36 years. But he’s back on top. He plays as an unhinged, coke-snorting dentist in the P.T. Anderson film, Inherent Vice, due out next month. He’s terrific in the otherwise unwatchable Fox series, Mulaney, playing a narcissistic TV game-show host—“a moron with power,” Short explains. “Those people are my specialty.” Somewhere in between, he has managed to recount his journey from Hamilton to comedic icon, in his new memoir, I Must Say: My Life as a Humble Comedy Legend.

Q: In preparing to speak with you today I watched a lot of SCTV sketches. I was struck by how many still work, how relevant the show remains. There’s a real timelessness to SCTV. Why do you think that is?

I think it’s because it’s not joke-oriented; and it’s not of the era—no one’s mentioning Ronald Reagan. It’s about characters; and that’s always interesting. Why does I Love Lucy still make people laugh? Because she’s a specific character, who has real reactions. I think that even though the characters were heightened; the SCTV cast were all such strong actors they found a certain truth in playing them. I think that’s why the show stays fresh and timeless.

Q: There’s something in Lou Cannon, the narcissistic game show host you play on Mulaney that’s reminiscent of Jiminy Glick, your clueless celebrity reporter. Is Cannon a descendant of Glick?

What I find funny about Lou Cannon is that he’s fundamentally not a bad guy. He just can’t imagine that everyone in the room isn’t just thinking about him, and his agenda. So Jiminy, when he would interview people he too was interested in what he wanted to talk about, and he’d done no research whatsoever on the person he was interviewing. So on that level showbusiness is narcissism. Which is always kind of amusing.

Q: What are they—lovable buffoons?

As my father would say: they’re horses’ asses. 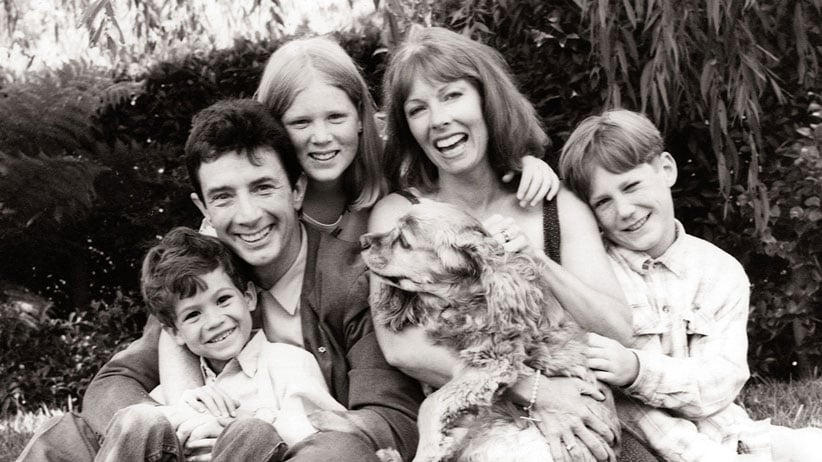 The Short family Christmas card (with Buster the dog) in 1994. (Photo courtesy of Martin Short)

Q: You’ve lived through tremendous pain. How did you learn to go on without Nancy?

I think everyone does. No one doesn’t have loss. No one doesn’t have pain. You have to figure out—you know the sun will rise the next day, that the people closest to you will be preoccupied with the scratch on their car; that’s just the way life works. If your natural orientation is to be happy, you have to then start developing tools to help you get back there. You can’t go through loss and just shuck it off the next day, cause then you’re not dealing with it. If you break your leg, you’re in a cast. There’s no getting around that.

Q: There’s a real joy about you, a genuine sense of happiness and contentedness. Where do you think that comes from?

Q: You had a lovely childhood…

It comes from that great childhood. Being the youngest of five, you’re adored, you’re fuelled by confidence. And I had great siblings. We have a real sense of closeness. And while I lost my brother at 12, and my mother at 17, and my father at 20, those things are all on the table. I think the things that can really eat away at one’s psyche are the things that aren’t discussed, that aren’t on the table.

Q: I don’t think there’s a harder art form than comedy. Have you figured out a surefire way to get a laugh?

Q: So how do you avoid anxiety, going out there knowing half the room is going to hate you?

I don’t do this to win the admiration of strangers. I actually don’t care. If you don’t like me, fine; and if you like me, how lovely. My criteria is based entirely on me. If you’re anything as an artist, you don’t bend. If a painter sits in his studio and thinks: oh, what if no one likes blue, then they couldn’t do anything.

Q: I’ve read that you improvised in filming Inherent Vice. How did that go over with P.T. Anderson?

He actually wanted it improvised. The car scene [a drug-fuelled car chase sequence] was a lot of improvization. The only problem is that Joaquin [Phoenix] kept cracking up. I’d improvise something and Paul would say: “OK Marty, do that again.” It’s that kind of in-the-moment improvising, but at the same time we were doing the lines in the script. Because Thomas Pynchon has written this beautiful book, and a lot of the lines in the movie came from it.

Q: You’ve never had a box office smash or a long running sitcom. You’ve joked your tombstone should say: “Almost.”

I said that once to Conan O’Brien, and he said: I won’t hear of it! I think the most wonderful people in comedy are the self-deprecators.

Q: Was it hard to write about the real, unvarnished Martin Short in your memoir?

Writing it wasn’t so hard as the idea of writing it. For years I’ve been asked to write such a book, and I thought: Oh, I couldn’t. Nora Ephron once said to me: ‘You know the secret of writing a book is: you write; because writing is just rewriting’. You get into it. It’s like when you work out, then you stop, and you think: ‘Oh, I could never work out again.’ Then when you start working out again, and you think: ‘How could I have never not worked out?’ Writing is kind of like that to me.

Q: And of course you’ve always done it.

Well, there’s a difference between a writer and an actor who writes. I wrote out of necessity. On SNL you’ve got to write something by Wednesday. Woody Allen said he started directing because he couldn’t get the director he’d wanted for the script he’d written. So you sometimes do things out of necessity. Then, there are the people who just have to sit in front of their computer and write all day to feel fulfilled. I’m happy to go play tennis.

Always. Some people sing in the shower. Some people don’t. I’m a shower singer. There’s an exhilaration to hitting a high note.

FILED UNDER: Martin Short The Interview