Why the nostalgic headdress won't go away 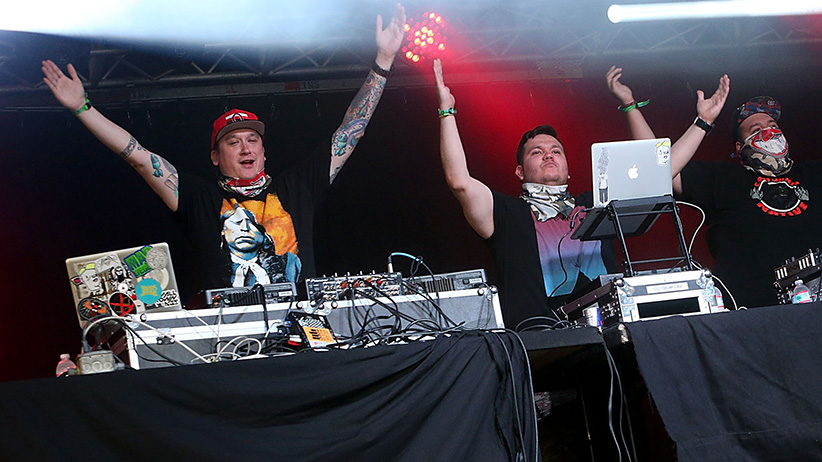 Every year in June, almost 100,000 inebriated young people descend on a farm in Manchester, Tenn., for a music festival called Bonnaroo. Its lineup, which, this year, resembled a cool mom’s iPod library (Lauryn Hill, Lionel Ritchie, Kanye West and Elton John), is usually as diverse as the festival-going crowd itself: a mix of college girls in flower crowns, middle-aged hippies strapped like Tensor bandages to overtired infants, frat guys in neon sunglasses who take too much ecstasy and chew the nozzles on their Camelbacks into a plastic pulp and, alas, white people of all ages in Native headdresses.

I attended Bonnaroo for the first time this year, where I saw that last group publicly admonished by the artists they turned out in droves to see: A Tribe Called Red (ATCR), an Aboriginal DJ trio from Ottawa. Not only did the band notice the dozens of white people in headdress costumes resembling feathered war bonnets typically worn by Plains Indian warriors, they even dedicated a song to them. I was standing near the back of their show, but I heard the dig loud and clear: “This one goes out to all the racist mascots.”

A Tribe Called Red, popularizer of “powwow step” (traditional Native music infused with electronic beats), is no stranger to racism masquerading as good, old-fashioned fun. One of the group’s members, Ian Campeau, lobbied successfully to have his childhood football team, the Nepean Redskins, change its name to the Nepean Eagles last year. “The number of times people show up to our shows in ‘redface’ is more frequent than I would like,” Campeau told the CBC last year. And, just as frequent, it seems, is the tendency of fans to deny or ignore their own wrongheadedness. ATCR may have condemned Native dress from the stage at Bonnaroo, but I didn’t see a single fan remove his or her headpiece as a result. So casual is Indian tokenism, it seems, that even diehard fans of Aboriginal rock stars can’t be bothered to discard their racist costumes. (The Tree Music Festival on Vancouver Island will do it for them: Campeau has publicly applauded its no-headdress policy.)

It’s no wonder, then, despite repeated confrontations with Native American groups, American sports franchises such as the Cleveland Indians and the Washington Redskins refuse to change their names and mascots. In June, the U.S. Patent Office ruled to strip the Redskins, an 82-year-old NFL team, of their federal trademarks, because the team’s nickname is “disparaging of Native Americans” (a decision the franchise will appeal), and American Indian advocacy group, People Not Mascots, announced plans this month to sue the Cleveland Indians in federal court for $9 billion over its derogatory “Chief Wahoo” logo. Dozens of news publications, including the Detroit News, have vowed to stop printing the Washington team’s full name, except when writing about the trademark controversy.

This is a commendable stance, it goes without saying, but it’s also almost guaranteed to be forgotten in the fog of indifference that surrounds the issue of Native North American sensibilities. This is because Indian tokenism isn’t really casual; it’s nostalgic: It operates not in the context of adult history, but in the benign, colourful, Neverland of childhood. There’s a reason why kids used to (and still do) play cowboys and Indians on their front lawns, why the classic movie fare for children preceding the 1970s was the western, with its cowboys and Indians, soldiers and Indians, black hats and white hats, morality more at home in colouring books and comic books than in adult art.

Whether the Native people in this context were demonized (more often, as the savage) or lionized (less often, as the noble savage), they were almost always dehumanized—but dehumanized in a way that seemed nothing if not innocent, benign, entertaining and rarely sinister. The Apache warriors shot out of their saddles in the old westerns suffered deaths as bloodless and negligible as the eight-year-old Apache warriors in someone’s backyard. Who were they, the players up on the screen or in the park? Indians, Redskins, Braves. The sports names and mascots hark from the same whitewashed era, and seem to the people who lived through it (or weaned on it) as breezy and inoffensive as kids’ games themselves. Ditto for the white folks in the colourful headdresses at Bonnaroo, who may wonder what all the fuss is about. But being patronized and diminished by someone’s else’s nostalgia is as pernicious as being told to get to the back of the bus. Until people can make that connection, mascots and headdresses are here to stay.