The prince we do not see 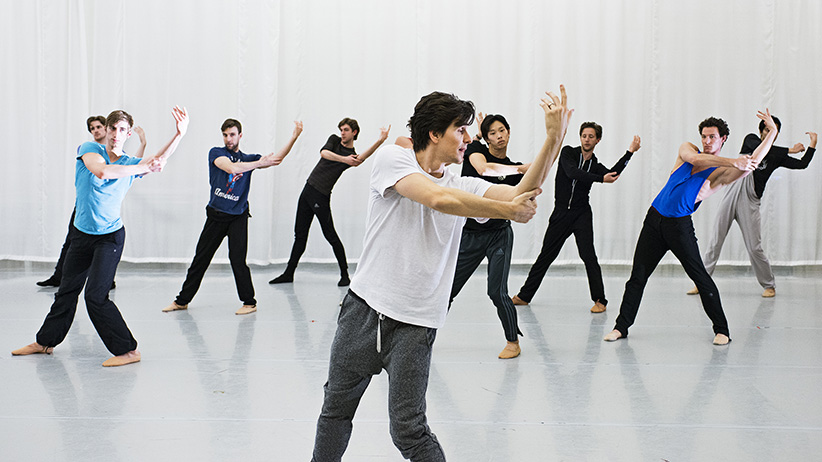 Guillaume Côté with Artists of the Ballet in rehearsal for Le Petit Prince. (Aaron Vincent Elkaim/The National Ballet of Canada)

Everyone has “a charming memory of The Little Prince,” says internationally acclaimed designer Michael Levine, in charge of the sets and costumes for the National Ballet of Canada’s version, running from June 4 to June 12. “But that’s because of the illustrations.” Levine is right. The 1943 novella by French writer and pioneering aviator Antoine de Saint-Exupéry, which has sold more than 140 million copies in 250 languages, can stake a claim to all-time best-loved status, and the author’s own exquisite watercolours are a large part of it.

Everyone remembers the child-like prince on his tiny planet with the three volcanos and the single rose, and the fox who delivers the story’s central theme: “It is only with the heart that one can see rightly; what is essential is invisible to the eye.” Fewer recall the parade of adult stereotypes, like the king with no subjects or the fact-blinded geographer; almost no one, by choice or parental censorship, remembers the prince’s embrace of a seductively sleek Angel of Death. All classic children’s stories, the sort that parents remember and read to their own kids, have a deep adult component, something that still appeals later in life and impels the intergenerational transfer. But The Little Prince is far more grown-up than most, an adult fable in children’s garb.

That’s why, two years ago, the opening workshop for Le Petit Prince, the NBC’s first full-length Canadian ballet in a decade, was devoted to “making sense” of Saint-Exupéry’s episodic anti-narrative, says choreographer Guillaume Côté. “My first thoughts were of an anti-gravity prince,” Côté says whimsically of his spacefaring protagonist, “someone who floats through the story.” Levine wondered if the prince was meant to be seen as “a part of us reading or watching, or a part of the aviator,” meaning the human flier, marooned in the desert and running out of water, who meets the prince and records his story.

For composer Kevin Lau, it was a tale of “death as a part of being alive, an embrace of human limitations.” Lau, 33, for whom Le Petit Prince is a first foray into ballet, had never read the book, and Levine had to re-read it to check his childhood memory, but Côté, 34, is a true devotee: “I played the prince as a seven-year-old in northern Quebec, in a little ballet school my family had; there’s even a photo—which no one shall ever see.”

They were all aware of the depth of autobiography in the story, from Saint-Exupéry’s troubled relationship with his wife, Consuela (the rose, right down to the cough both flower and wife developed), to his own 1935 crash in the Sahara, and the days of thirst and hallucination that followed. Behind it all is the shadow of the Second World War and the quiet desperation of a French patriot. After the German occupation of France in 1940, Saint-Exupéry fled to America. There he wrote The Little Prince, while hoping against hope for the existence of essentials—like a liberated France—that were “invisible to the eye.” On July 31, 1944, flying for the free French forces, Saint-Exupéry crashed into the Mediterranean; this time he did not survive.

Out of the workshops and the varied interpretations grew a fluid collaboration, one that involved the dancers as well. Levine recalls one of the dancers playing the emotionally needy rose looking over her shoulder at the prince, to see if he was watching her. “It told a story all on its own, and now it’s part of the performance.” Then there was the table. “I had one made for the businessman episode,” says Levine. “Guillaume came into rehearsal and started drumming on it, keeping time.” That inﬂuenced Lau’s score: “I had video of that choreography and it gave me an idea of Guillaume’s thinking, so I adapted there.” Then, laughs Levine, “we abandoned the table because it was in the way. But we kept the drumming.”

In the end, it was clear to Côté that The Little Prince was about human relationships. And that was what made dance—which “creates relationships instantly, with the slightest movement, like no other art form,” he says—a perfect vehicle for it, a means to make unseen essentials beautifully visible.