The Toronto anaesthesiologist who's big in Japan 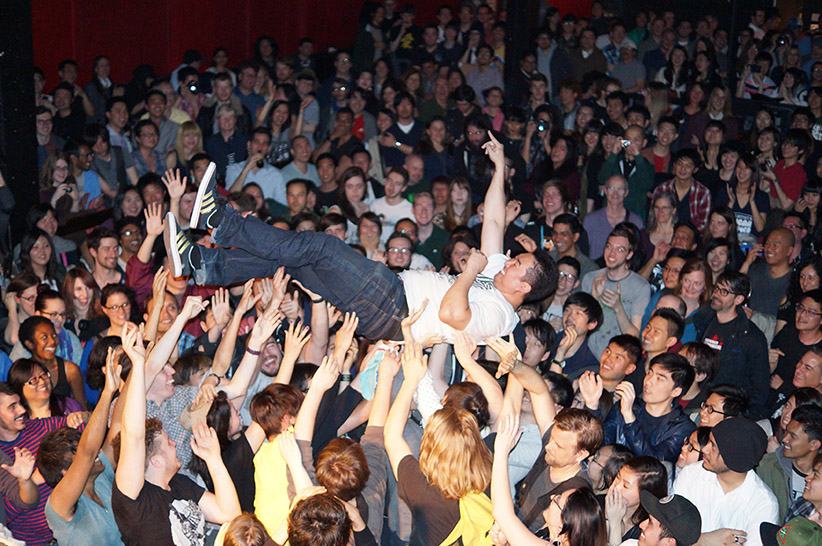 The article was originally posted in 2015. In October, 2018, Steven Tanaka will present Next Music From Tokyo, Vol. 13, in Vancouver, Montreal and Toronto

Steven Tanaka is big in Japan. When he shows up at rock shows in Tokyo, bands bombard him with demo discs and free merchandise, eager to get on his good side. “Among musicians, Steve is kind of famous,” says Toki Imada, bassist of the Fukaya rock outfit Mothercoat. “He’s like a hero.”

At home, though, it’s hard to tell. Tanaka, an anaesthesiologist from Toronto, is soft-spoken and unassuming. He’s never played in a band. He didn’t even like Japanese music until he was in his 30s. How did he become the golden boy of the underground music scene in the Land of the Rising Sun?

The answer is Next Music From Tokyo, an annual, week-long tour that transplants a handful of Japanese buzz bands onto club stages in Vancouver, Toronto and Montreal. Tanaka is the tour’s founder, booker, manager, host, roadie and occasional doorman—and, most notably, he pays for it all. Between airfare, accommodations and the miscellaneous fees of a DIY operation, each edition of the tour—the seventh takes place this June—costs him roughly $40,000 to produce. He makes $5,000 back from ticket sales. He’s neither nuts nor a bad businessman—just a diehard fan. “I’m not doing this for financial success or to become famous,” he says. “My real goal is to help give Japanese bands a chance to travel outside of the country and perform. I want to introduce Canadians to Japanese music.”

Tanaka himself discovered Japanese indie rock less than a decade ago. Growing up in Vancouver—where, even as a non-musician kid, he dreamed of being a rock star—he dismissed the nation’s modern music as embarrassingly derivative (J-pop), comically campy (visual kei) and downright bizarre (see: babymetal). But then, watching anime television series in the mid-aughts, he discovered and instantly fell for Japan’s hidden wealth of innovative rock. The bands evoked Western indie output—the relentless riffs of Death From Above 1979, Radiohead-like experimentation, Explosions in the Sky’s ambient post-rock—but with more spontaneity and stage presence. He made dozens of cross-Pacific trips to catch his favourite bands before deciding to bring the talent back home: it would give artists a unique opportunity to perform in a country they’d otherwise never play and give Canadian audiences a glimpse of lesser-known Japanese music. And if it just so happened to vicariously fulﬁll those rock-star dreams—emceeing, crowdsurfing, partying with bands—well, all the better.

In 2010, Tanaka founded Next Music From Tokyo. (The name, stilted English and all, is the brainchild of the first tour’s roster.) He had passion, sure, but no experience as an event planner or promoter. “I went strictly by the book for the first few tours,” he explains. He secured work permits for all the performers, which meant formally explaining why the bands weren’t stealing jobs from Canadians. (He later realized most venues are exempt from regular foreign-worker regulations.) Then there was the on-stage electrocution (volume one), the band-manager bickering (volume five) and the time a cyclist crashed into one of the band’s vocalists (volume six). But the music was never an issue.

“Steve knows the gems—the very good parts of true Japanese indie,” says Imada, who first met Tanaka at a gig in Japan. He asked her band, Mothercoat, if they’d participate in the tour’s pioneering run, and they happily agreed. It helped them expand their fanbase, Imada says; when the group recently launched a crowdfunding campaign, the first backer was a Canadian. Now, they’re returning as part of the seventh tour alongside emo rockers PENs+, prog-pop powerhouse Atlantis Airport, noisy no-wavers Otori and volume-one veterans Owarikara. Don’t worry if the names are unfamiliar; even in Japan, they’re well-kept secrets. “Steve really digs deep into the underground scene,” says Imada.

Tanaka’s now spent more than $200,000 on Next Music From Tokyo, but he already has bands in mind for volume eight. Call him crazy, but watch his face light up as he stage-dives into a sold-out crowd and you’ll know, for him, it’s worth every penny.