The web has wrongly credited the brooding meditations of a Canadian teen to the artist Frida Kahlo. Is that necessarily a bad thing? 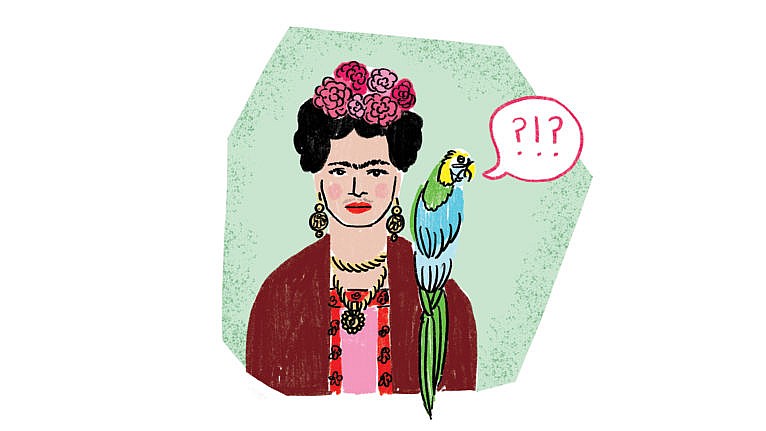 In the summer of 2015, Rebecca Martin was perusing Facebook when she noticed an inspirational quote meme posted by an acquaintance:

but then I thought, there are so many people in the world, there must be someone just like me who feels bizarre and flawed in the same ways I do

I would imagine her, and imagine that she must be out there thinking of me too.

well, I hope that if you are out there you read this and know that yes, it’s true I’m here,

and I’m just as strange as you.

Martin immediately recognized words she had written as a teenager and submitted in 2008 to the anonymous confessional blog PostSecret. But this Facebook meme attributed the quote to Frida Kahlo, the deceased Mexican artist known for her surreal and evocative self-portraits. Then Martin googled the quote. It was everywhere—in memes and on inspirational sites, in magazines—and always attributed to Kahlo. Martin replied to her acquaintance’s post to explain that the quote was hers, adding: “I do not mean to detract from the sentiment. I certainly shared it at one point in time. I think . . . it would have helped to know that so many other people felt like strangers too.”

READ: Two paintings by a beloved Nova Scotia folk artist have vanished. Can they have gone far?

The whole thing induced a surreal sort of shock. Mostly, Martin thought that when people saw her claim authorship, they would think she was out to lunch.

Immediately, she searched online for an image of the postcard she’d originally submitted to PostSecret, and there it was: a purple and pink sideways image of Kahlo on a floral backdrop, with the quote running across the artist’s face. Martin, now at a marketing research firm in Toronto, had been a shy, inner-dwelling high school student in Markham, Ont., when she ripped the image out of a magazine and glued the typed-out text over top. She’d been delighted when the collage made the front page of the blog. But the whole point of PostSecret was anonymity, so there was no way to prove the words were hers.

“I had this feeling, not of panic, but of ‘How am I ever going to correct the record on this?’ ” she says. “It’s not that I need everyone to know I said that, but I love history and I’m very interested in it, and I know this information is incorrect. I would like it to be at least known that Frida Kahlo didn’t say that.”

Around the same time, a friend of Martin’s found an instalment of the inspirational cartoon Zen Pencils based entirely on the quote. Martin contacted the artist, and he in turn reached out to QuoteInvestigator.com, which concluded that it found Martin’s “assertion credible.”

So for the last several years, at least, there has been an internet paper trail correcting the record. But the life cycle of that quote attributed to Kahlo has only proven the truth of the saying “A lie can travel halfway around the world before the truth can get its boots on” (which is usually attributed to Mark Twain or Winston Churchill, neither of whom said it). This all surfaced again in November, when New York’s Museum of Modern Art posted the quote on Twitter and Instagram, along with an image of Kahlo’s 1940 Self-Portrait With Cropped Hair from its collection. A friend of Martin’s replied to them, and MoMA later acknowledged in a tweet that the quote had been misattributed. But MoMA also left the original post up, undoubtedly buttressing the myth. This Christmas, Martin’s parents gave her a Moleskine notebook with the quote on it, attributed to Kahlo. “My parents are thrilled and . . . this is not a way that a person could plan to make their parents proud,” she says. “It’s just very strange. But it’s also something that seems very separate from me now, that it’s just this thing that has a life of its own that’s connected to me.”

MORE: As photo booths disappear, the pictures they gave us are ever more precious

There is, of course, a beautiful and empathetic symmetry to all of it. A teenager unsure of her place wrote an earnest confession of alienation and sent it out anonymously to the world. Whereupon, tens of thousands of people over more than a decade related so fiercely to her displacement—even if they were mixed up about who felt that way—that her words turned loneliness into a shared experience.

“I think it’s a very common feeling, and I really understood that, seeing the response,” Martin says. “Even though I think people like the idea that it’s Frida Kahlo who said that, it made me feel like I’ve inadvertently connected to all these people.”

That teenage version of Rebecca Martin was never alone. And who knows? Maybe Frida Kahlo felt that way too, even if she never told us.

This article appears in print in the March 2022 issue of Maclean’s magazine with the headline, “Dangling attribution.” Subscribe to the monthly print magazine here.