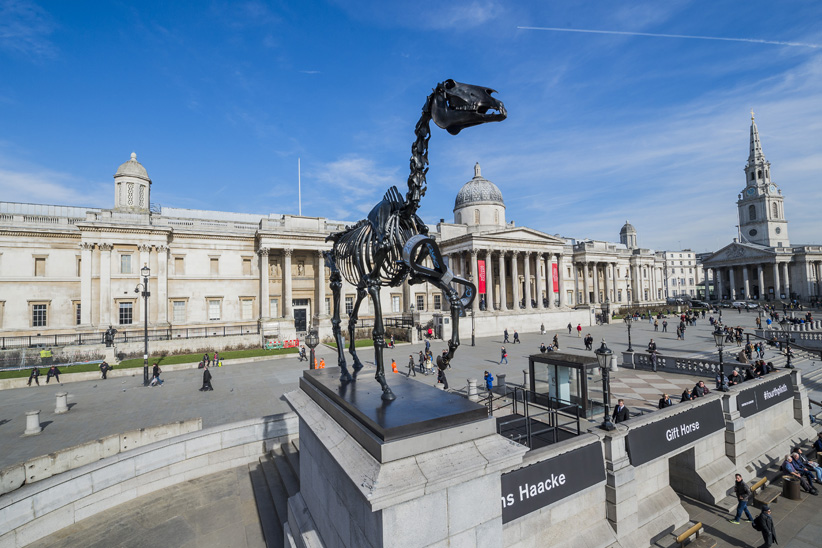 It was a blustery grey spring day, but Trafalgar Square, in the heart of London, was packed. Dozens of children clambered up the granite base of Nelson’s Column to get their pictures snapped while they sat on the broad backs of four huge bronze lions. Trafalgar is full of memorials and, while three of the imposing stone plinths in the square are topped by statues of a king and forgotten generals, the fourth, in the northwest corner faced by the National Gallery and Canada House, was left empty when the square’s Victorian redevelopment ran out of money.

Meant to house an equestrian statue, since 1999, it has provided a rotating series of artists with something priceless: a famously busy outdoor locale in London where they can show off their creations. The prosaic name, the Fourth Plinth, may be a tongue twister, but it’s a showcase for one of the most popular and accessible public art competitions in the world. That’s if anyone could figure out what the current installation represents.

“A dinosaur!” pointed out more than one confused grandparent to a youngster. It wasn’t actually a raptor, but rather, a dark-bronze skeleton of a horse, whose raised left foreleg is hobbled by a bow made of electronic stock- market tickertape. Called Gift Horse, the piece by German artist Hans Haacke was unveiled in March by Mayor Boris Johnson, who called it “a startlingly original comment on the relationship between art and commerce.”

Others see it as a Trojan horse, bearing a sly critique of ruthless capitalism. Haacke, who has previously courted controversy—his winning exhibit for the 1993 Venice Biennale featured a giant photo of Hitler, a smashed floor and the word “Germania” inscribed on a wall—was noncommital when asked for the precise impetus behind Gift Horse, though he said it is a homage to the great horse painter George Stubbs, whose works are in the neighbouring National Gallery.

Haacke’s creation is the 10th design on the Fourth Plinth since the practice began. While some selections, including Gift Horse, have been controversial, others are populist. All are publicly funded—the unusual exhibition space is currently run by the Greater London Authority—and free for visitors.

Anne Poole, in town from Essex with two friends, was one of many who walked through the square to see the new art. “I had to check it out, I always do.” Her verdict? “I like it. It’s different.” Well, different-ish. The composition and colour, at least, meld with the square’s statues; most of the previous installations have been bolder and brighter. First was the Turner Prize-winning artist Mark Wallinger’s Ecce Homo (Behold the Man), a human-sized Jesus wearing a loin cloth and a barbed-wire crown. Other pieces included a transparent, upside-down version of the plinth itself, a model of a building made of coloured glass, and last year’s Hahn/Cock, a five-metre-high blue cockerel that its creator, Katharina Fritsch, described as a feminist statement on the many men on pedestals in Trafalgar. 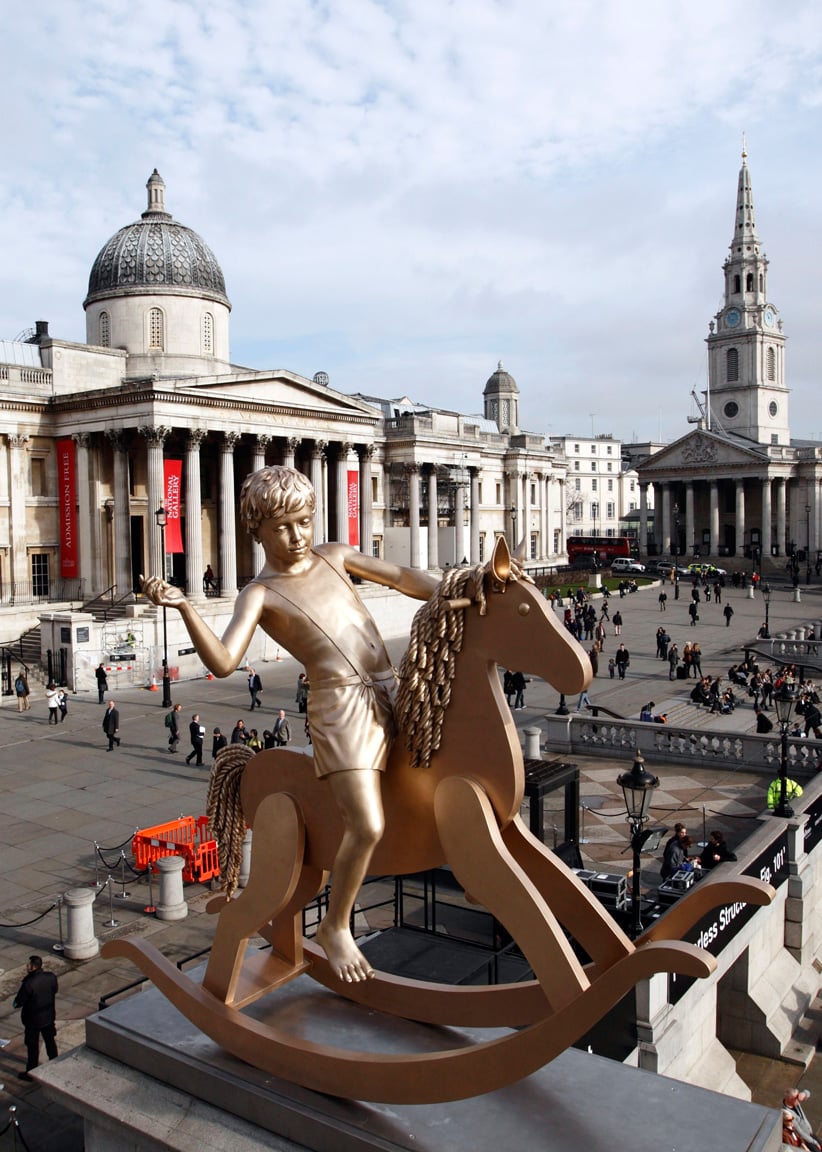 The most original was Antony Gormley’s One & Other, in which 2,400 members of the public each spent an hour on the plinth on 100 consecutive days. “There were poets, musicians, political activists, knitters, nudes and complete nutters,” recalls Tim Andrews, a retired lawyer from Brighton. On Aug. 15, 2009, he overcame his fear of heights to take his turn on the plinth: While dressed in a Victoria frock coat, he sang and danced to songs by the group Madness to raise money for Parkinson’s. (He was diagnosed in 2005.) “I thought it was wonderful,” he says, “getting ordinary people the opportunity to express their artistic [selves].”

Andrews hopes the Fourth Plinth will never be filled by permanent art—“It’s a living thing that should change from time to time,” he says. Valerie Hope wasn’t as impressed. The Londoner and her husband spent time analyzing the skeleton, even reading the explanatory plaque for clues. “Why on Earth?” she puzzled. “It’s random.” After one last look, they wandered off to see far more easily understood public art—a flock of 50 giant Shaun the Sheep sculptures scattered around the city. Next year, the plinth gets a sculpture by David Shrigley that promises to be more accessible: It’s a really big thumbs-up.