Using projections and finger-plucked folk songs, Shary Boyle and Christine Fellows’s project is a tribute to childhood and friendship 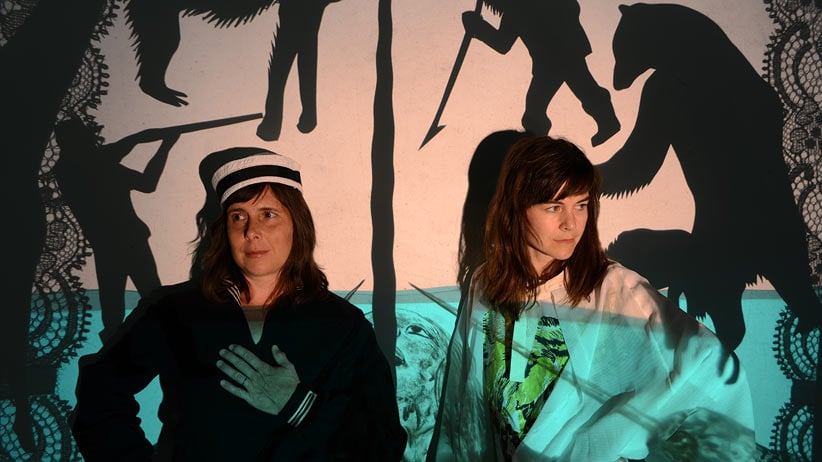 Last October, Shary Boyle and Christine Fellows arrived in Fort Simpson, a remote island village of 1,250 that sits a few degrees below the Arctic Circle in the Northwest Territories, to conclude their territory-spanning tour of Spell to Bring Lost Creatures Home. After a week of lugging a ukulele and an overhead projector (the kind your high school teacher used) to and from small theatres­—and even smaller planes—in secluded communities such as Inuvik and Norman Wells (population 750), Boyle, a Toronto-based visual artist, and Fellows, a singer-songwriter from Winnipeg, set up shop in the local elementary school, where, that night, they performed the show for an audience of 45.

It’s no coincidence that a central theme of the piece is isolation. Spell is a series of fairy-tale vignettes about childhood friends, imperilled sailors and other fantastical characters. As Fellows plays stripped-down folk songs about the titular creatures, Boyle creates live-projection art to match her stories: tiny cut-out characters lying in the grass, acetate-sheet silhouettes washing ashore. The show—which will be performed twice during Toronto’s Luminato Festival—is lo-fi, all-analog and unlike anything you’ve seen before.

Related: Our Q&A with icon Charlotte Rampling, performing at Luminato

Unless, of course, you’ve witnessed any of Boyle and Fellows’s previous collaborations. The two artists, who met in Winnipeg through a book club, have been working together since 2005, when Boyle told Fellows she’d been listening endlessly to her music—“insightful, observant and literary,” as she describes it—and wanted to create art to accompany it. “I was completely floored,” recalls Fellows, who had long thought, “No one cares about these lyrics but me.” The result was a music video for Migrations—a song off Fellows’s 2005 album, Paper Anniversary—filled with images of a rural Ontario gas station and a family of six in a station wagon on the Trans-Canada Highway.

The pair kept up their own careers—Fellows has six solo albums; Boyle, who represented Canada at the 2013 Venice Biennale, has had work shown in the National Gallery of Canada and the Art Gallery of Ontario—but they never stopped working together. In 2012, they created an ambitious all-ages epic, Everything Under the Moon, with multiple projectors and performers. “We just went nuts,” Fellows says. “We could never tour it.”

Spell, by contrast, was built for touring. Boyle and Fellows spent a year creating it after Yellowknife’s Northern Arts and Cultural Centre invited them to perform a new work across the territory. Neither had been to the Northwest Territories—“it’s one of those places you don’t get to,” Fellows says—but they used their experiences in the Yukon and Nunavut, as well as their own childhoods, as thematic fodder for the piece, which whimsically explores themes of marginalization and alienation. “I feel like Christine is on an exploratory mission to examine and celebrate the life of the loner,” says Boyle. “We’re talking old women who live alone. That’s not a character you hear in a lot of pop music.”

Spell isn’t a traditional narrative, but its separate scenes are connected by recurring characters and an overarching idea: “lost souls being rounded up,” according to Fellows, such as kids heading home at twilight or seafarers sailing toward harbour. Me and Carmen, one of the show’s vignettes, tells the story of two unpopular, and inseparable, friends. Overlaying acetate sheets, Boyle animates the pair pedalling bicycles down the street—legs pumping and all—and transforms the picked-on pals into owls and their bullies into mice. The scene ends with the two staring into a starry, multi-layered sky.

It’s not hard to imagine Boyle, toiling over the projector’s 11-by-11-inch screen, and the string-plucking Fellows as real-life counterparts to their characters. “I don’t know how you would do [this show] without friendship. There’s so much trust involved,” Boyle says. That makes for an intimate, vulnerable sort of performance—a humble anthem for loners and freaks. “When we started booking shows in the south, we wondered if it would translate—if there was something too north about this work,” Boyle says. “But people seem to identify regardless. It’s not rural or urban or north or south. It’s just deeply human.”