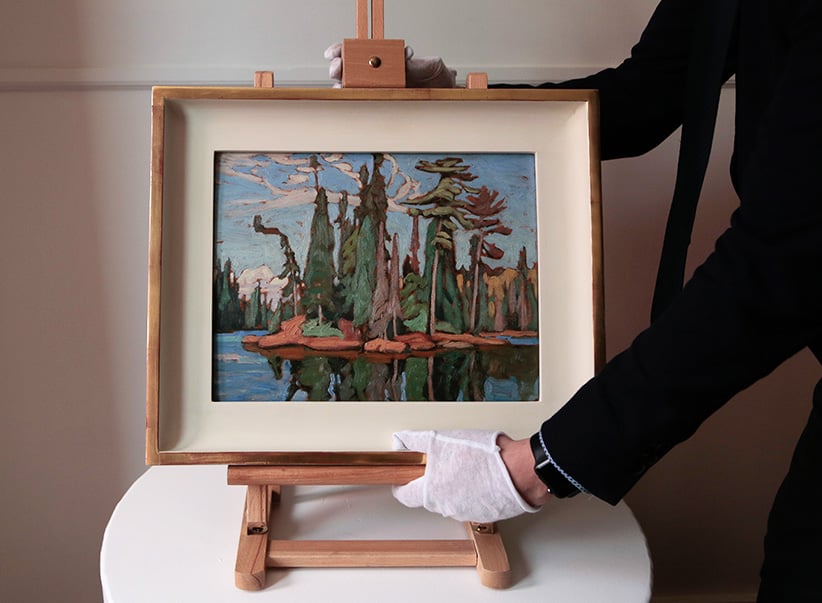 Algoma (Algoma Sketch 48), a painting by Group of Seven artist Lawren Harris, on display at Consignor Canadian Fine Art in advance of the Auction of Important Canadian Art. The painting was held in a private collection in Australia for many years before being repatriated. The value is estimated between $400,000-$600,000. (Photograph by Liam Maloney)

Last December, Rob Cowley, the president of the Toronto-based auction house Consignor Canadian Fine Art and Appraisers, got an email from an Australian collector inquiring about a piece of art. When he opened the attached photograph, he knew he was looking at something extraordinary. Even though the image was low-res and fuzzy, he instantly recognized it as a version of Island-MacCallum Lake by Lawren Harris, a painting so emblematic of the country’s most important art movement, it was the cover of the National Gallery of Canada’s 1995 book, The Group of Seven: Art for a Nation, written in celebration of the famous painters’ 75th anniversary.

First exhibited in 1921, Island-MacCallum Lake (which now belongs to the Vancouver Art Gallery) is a fall scene of a tree-covered island resting in serene Algoma waters. Long known as one of Harris’s most important works, its subject is one the artist returned to repeatedly; he made at least four known variations of the painting—one of which sold in 2008 for just over a million, reputedly to the actor and comedian Steve Martin.

“Because its tall, thin trees are so distinct,” Cowley says, he knew that he had been sent an image of the painting that Harris had done as a study for Island-MacCallum Lake. He also knew that this work was extremely special because its whereabouts had been unknown. “It had never been in an exhibition, or a book, and that it had never been seen by anyone but its owners’ friends and family for most of the last century.”

Related: From a home jammed with art, a trove of buried treasures

From a picture of the back of the painting, Cowley also knew there was no question about its authenticity. It showed a rare label from the Mellors-Laing Galleries, once located at 759 Yonge St. in Toronto. “Because the gallery was in existence for only one year—1940,” says Cowley, “we could date the work’s sale.” The painting’s verso showed the number 48, which corresponded to an inventory of Harris’s art created in 1936.

Talented, well-educated and wealthy (he was heir to the fortune of farm-machinery manufacturer Massey-Harris Co. Ltd) Lawren Harris was the perfect patrician voice to lead the early 20th-century charge for Canadian art. After attending the University of Toronto, he spent four years in Berlin from 1904 to 1908, where he found himself observing a culture whose art schools were being shaken by new approaches toward painting. Impressionism, expressionism, and abstraction were teachings that he brought home and shared with friends, including Tom Thomson and J.E.H. MacDonald. He became the unofficial leader of the Group of Seven, which held its first exhibition in May 1920. 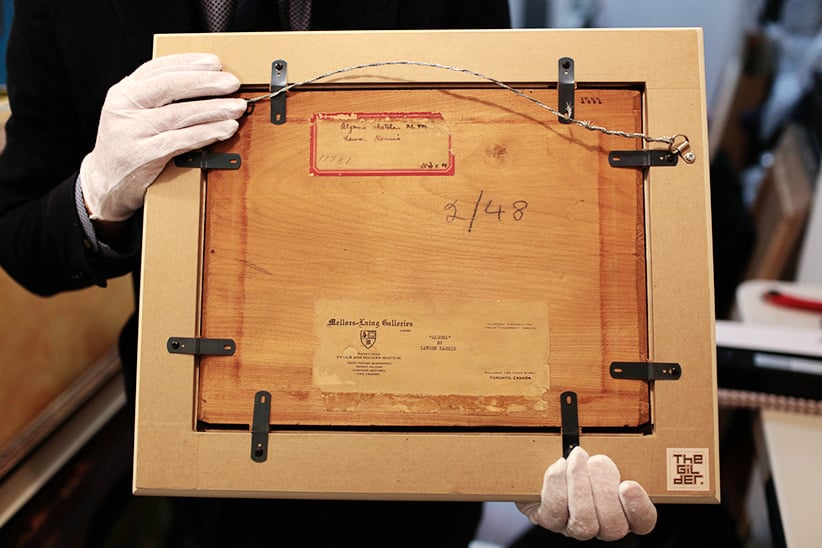 The back of Algoma (Algoma Sketch 48), a painting by Group of Seven artist Lawren Harris, on display at Consignor Canadian Fine Art in advance of the Auction of Important Canadian Art. (Photograph by Liam Maloney)

Algoma, the northwestern Ontario region beyond Lake Superior, where Harris found his subject for Island-MacCallum Lake, became a critical geographic inspiration for the group. Harris first visited the territory in May 1918. Mesmerized by its expansive vistas of trees and winding rivers where no clearings could be spotted for miles, he returned to the uncharted territory repeatedly and with fellow Group of Seven members MacDonald, Frank Johnston and A.Y. Jackson. They travelled in a railway boxcar that Harris had refurbished with a sink and a stove so that it could be used for transport and as a living quarter. Few of the lakes in Algoma could be found on a map, so the group named the bright waters they painted after people they admired. Harris titled the scene in Island-MacCallum Lake in homage to Dr. James MacCallum, the renowned patron of Tom Thomson.

What Harris most certainly would never have imagined is how six decades later his study for that work, now known as Algoma (Algoma Sketch 48), would find its way to Australia. In 1940, a Toronto businessman purchased the painting at the Mellors-Laing Galleries. He and his wife placed it on the wall of their family room, where bedtime stories were read to their young daughter. In the 1960s, that daughter moved with her husband to Canberra, but Algoma (Algoma Sketch 48) always remained in her mind. Knowing this, her parents willed her the work, and in the 1980s it became part of her South Pacific home. The painting “always reminded me of comfortable family times and camp days in northern Ontario,” she told Maclean’s, requesting to remain anonymous. 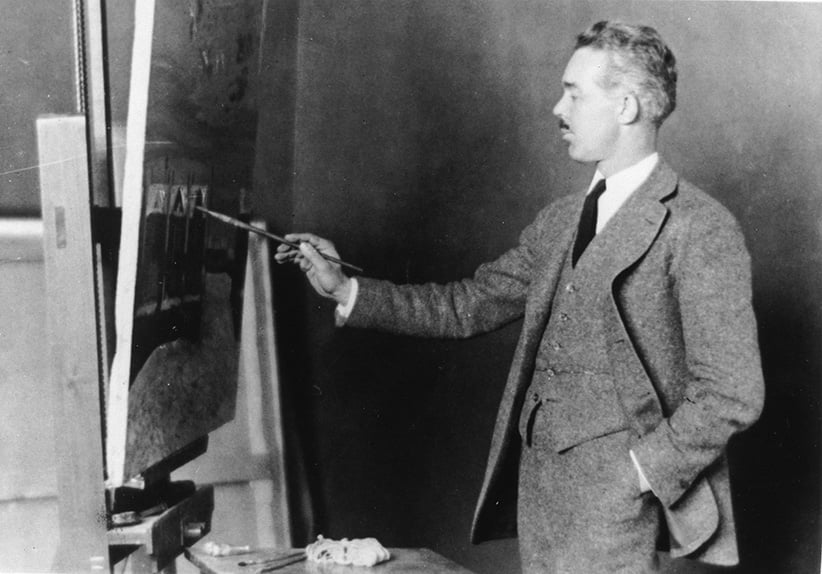 She contacted Cowley not long after Steve Martin thrust Harris into the international art spotlight. Martin, a collector of such 20th-century cultural game- changers as Pablo Picasso, Georges Seurat and Edward Hopper, purchased works by the Canadian painter after he was struck by Harris’s unique ability to render landscape “in a non-European way.” When Ann Philbin, director of Los Angeles’s Hammer Museum, saw paintings by Harris in Martin’s collection she convinced the star to use his celebrity to curate an exhibition for her institution. Wanting to bring Harris to the world’s attention, he agreed, and last October The Idea of North (co-curated with the Art Gallery of Ontario’s Andrew Hunter) opened in L.A. before it travelled to Boston’s Museum of Fine Arts. Next month the show comes to Toronto’s AGO. “Ultimately,” Martin told Maclean’s in advance of the L.A. show, “I think the work is just going to slay everyone.”

Meanwhile, the market has paid unprecedented amounts for his art. Last November, his sales record was broken when the auction house Heffel sold Mountain and Glacier (1930) for $4.6 million, more than triple its presale high estimate of $1.5 million. That hasn’t gone unnoticed by those who own works by Harris. Heffel, as well as Canadian auction house Waddington’s, have Harris paintings in their spring sales. “Arguably there could never be a better time than now to sell works by Harris,” said David Silcox, art historian and former director of Sotheby’s Canada.

Still, because of the Canberra owner’s bond with Algoma (Algoma Sketch 48), she initially had “no interest in selling the work,” says Cowley. “She wanted an appraisal of her painting.” Things only began to change when Cowley explained the historical significance of what was hanging in her living room. By late January, she began to wonder, “How can I hang on to such a critical piece?”

As she is a widow living alone, learning about the value of the work sparked concerns over whether her home had a proper storage and security system. As well, because the painting meant so much to her, she said, “I wanted to make sure that the work ended up in the hands of a collector or institution that appreciated its importance.”

Still, she had a final reservation before letting Algoma (Algoma Sketch 48) out of her home: How would it be sent to Canada? The painting, which was under glass, could not be transported in this format, but removing its frame was a challenge for anyone but an expert. Cowley offered a suggestion: “What if I came to your house to pick up the painting?” That persuaded her to consign the work.

And so, in early February, Cowley left for his first visit to Australia, which, including travel was a 90-hour round trip. “I flew out on a Sunday, arrived on a Tuesday, visited my consignor on the Wednesday and flew back on Thursday.”

When he arrived at his client’s house, Algoma (Algoma Sketch 48) was sitting on her living room sofa. Although the painting had a thin layer of dirt on it—a combination of soot from the woodburning stove in the boxcar where Harris first kept the work plus more than eight decades of dust—Cowley knew the condition of the work was exceptional. “You don’t worry when the painting is dirty,” he explained. “It would be more concerning if it had been improperly cleaned, in which case sometimes damage is done to the art.”

For the next 25 hours Cowley transported Algoma (Algoma Sketch 48) further than any other work by Lawren Harris has ever travelled. The painting, which he carried in a specially insulated, custom-built brief case, was never out of his grasp.

Once back in Toronto, he went straight to the studio of a leading conservator of works by the Group of Seven. Now Algoma (Algoma Sketch 48) is as clean as when Harris finished it in 1920. “Over the last century there was a bit of curvature to the board, which is not uncommon with wood panels,” says Cowley. “Other than that it is pristine.”

On May 31, 2016, Cowley himself will stand at the podium taking bids when Algoma (Algoma Sketch 48) is placed on the block at Consignor Canadian Fine Art’s Spring Auction of Important Canadian Art. For him as well as his client—be it a major gallery or private collector—the scholarship on Harris has taken a step forward. Algoma (Algoma Sketch 48) has now been publicly catalogued, it can be viewed online, it is part of a new dialogue and will likely make it into exhibitions in the near future. “The painting brings me back to the reason why I went into the business,” says Cowley, “It’s a chance to hold history and share it.”