Valentina Lisitsa, free speech, and the problem with philanthropy

How big does a mess outside the concert hall need to get before it affects what happens inside? 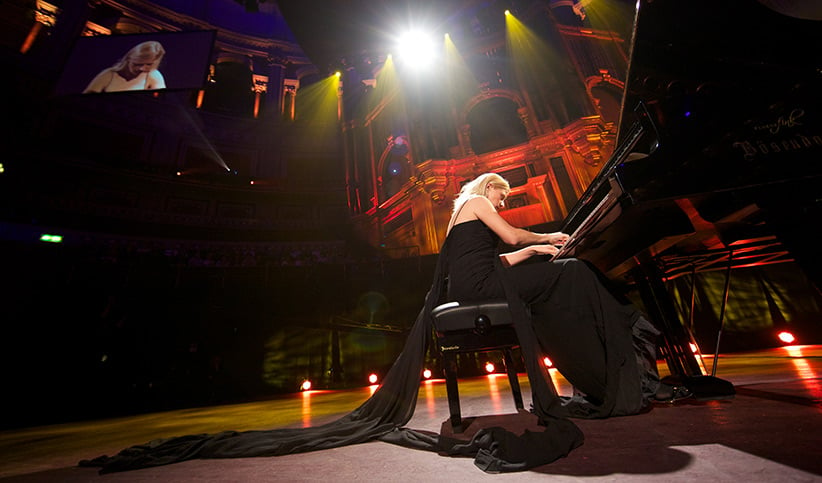 Let’s talk about this piano soloist and the Toronto Symphony Orchestra (TSO).

I know a conductor who swore in rehearsal and, if the musicians who were present have anything to say about it, he won’t be back. It’s not as though he used a word they hadn’t heard before: Classical musicians usually come from middle-class backgrounds and, offstage, they’re pretty much like the people you went to high school with. They’re used to hearing short words.

But decorum is enforced in a large classical-music ensemble, because what these people are trying to do is really hard: play thousands of notes in such close alignment, the dozens of them sound like one breath, one heart. Of course, there are disagreements. You need good faith to resolve them. You can tell when things get shaky. Leonard Bernstein once walked onstage at Carnegie Hall and apologized to the audience for Glenn Gould’s tempos in Brahms. Kathleen Battle used to be the biggest star in opera; she fell into the habit of mistreating the people she thought were beneath her station, and it basically destroyed her career.

My point is that orchestras aren’t, in practice, freewheeling free-speech labs, where the protagonists grimly buckle down and work through knotty doctrinal disputes. There’s no time. You park all that stuff at the door. Which is not the same as saying the dispute between Valentina Lisitsa, a Russophone Ukrainian pianist, and the Toronto Symphony, which dumped her from a Rachmaninoff gig after it received complaints about her extended string of bizarre Twitter outbursts, is cut and dried. She was planning to park it at the door. She had no intention of debating the worth of Russian President Vladimir Putin’s Crimea policy onstage. She was going to play some Rachmaninoff and, while I personally prefer his First and Third Piano Concertos to the Second, she would certainly have done a creditable job of it. In theory, no problem. [Eds. note: The Canadian Press has reported that Lisitsa will still be performing for the Calgary Philharmonic Orchestra in June, as scheduled.]

But there is also precedent for soloists being sent packing because what they were doing outside the hall was too big to park. Last year, Ottawa’s opera company fired a soloist because he mocked a guy for riding a bus with decorated nails. This is a handy test of the free-speech credentials of Lisitsa’s defenders. If it’s OK to keep your singing job after you post photos of a man, call him a “moron,” mock his face, and compare him to “the black males who wear their pants down off their asses,” then I guess it’s also OK for Lisitsa to rock Rachmaninoff after posting this and several other appalling things. And if not, really not.

Lisitsa says a TSO donor threatened to withhold money if she appeared. There’s a good chance that’s true, and that the TSO was sensitive to it. Performing-arts organizations everywhere are struggling with flat or declining government grants and audiences whose loyalty is not assured. The TSO’s particular problem is that its competitive environment has recently turned ferocious: In the past decade, two far superior concert venues—Koerner Hall and the Four Seasons Centre—have opened within several blocks of Roy Thomson Hall, the TSO’s venue. On any given night, audiences have very good alternatives to the TSO. The solution, if it can be done, is to put the touch on a smaller number of loyal patrons with deep wallets. Jeff Melanson, the TSO’s CEO, has already identified fundraising as the TSO’s best growth opportunity. And the thing about philanthropy is that the philanthropist gets a say.

I’m uneasy about the TSO cancelling Lisitsa’s appearance. [But it’s not as though the organization’s threshold for pro-Russian political opinion is low: Valery Gergiev, perhaps the world’s leading conductor, but also a notorious Putin pal, brought his Mariinsky Orchestra to Roy Thomson Hall a year and a half ago. [UPDATE: That appearance was a Roy Thomson Hall presentation; the TSO had nothing to do with it. Gergiev’s last TSO appearance dates to 2007.] And it’s not as though the TSO sought a cheap way out of this mess: It never questioned its commitment to paying Lisitsa’s fee, even after it told her not to show up, and it is now offering free tickets to everyone who attends the concerts tonight and tomorrow, as well as refunds to anyone who asks.

And the things Lisitsa has been writing are disgusting. She was pretty good last night on As It Happens, playing cheat-and-retreat with her statements, saying that when she compares somebody to feces or makes repeated references to the Holocaust, she doesn’t mean what she plainly means.

I’m struck by the news that Stewart Goodyear, who was to play the same concerto Lisitsa had been scheduled to play, cancelled in turn. Her detractors blocked her appearance; her supporters blocked his. I bet a lot of musical organizations will be steering clear of musicians with any connection to the Ukraine dispute for a long time to come. It’s a nasty business.

[UPDATE, Wednesday evening: This post from Musical Toronto includes a link to a .pdf with seven pages of Lisitsa tweets, prepared by TSO management, and an explanation from the orchestra’s CEO about how this mess began. Readers are encouraged to look at the tweets and make up their own minds.]