What Montreal meant to Leonard Cohen

Leonard Cohen's beloved Montreal went beyond the neighbourhoods of his youth, beyond the Jewish quarters in Westmount 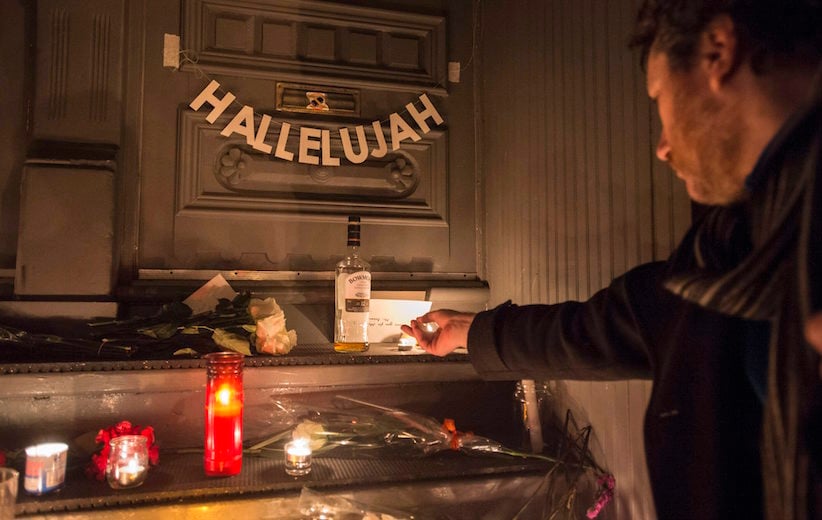 A man lights a candle in front of the home of legendary singer and poet Leonard Cohen Thursday, November 10, 2016 in Montreal. (Paul Chiasson/CP)

Leonard Cohen whispered weary truths over simple arrangements—a poet set to music, like Tom Waits with plenty of Vicodin. He lived much of his life away from his native Montreal, but like many expats of this great, infuriating city he remained firmly attached to its dark corners and dizzy streets. In “Suzanne,” he lies next to his half-crazy ingenue as the St. Lawrence flows by outside her window. “Hallelujah” could be a nod to Montreal’s subtle blasphemy; most things, especially those streets, are saints in name only.

Cohen grew up in Westmount, midway between the rarefied reaches above the Boulevard and the more pedestrian postal codes below Sherbrooke. He attended school and synagogue nearby, but his heart lay outside the cloistered Westmount Jewry of his youth. His parents’ generation huddled together out of pride and necessity; Cohen preferred the world beyond. He ate at Ben’s, an all-night downtown deli lit by fluorescents and boozy conversation. He went to McGill, that bastion of WASP dominance. He strolled Saint Laurent Boulevard and often lent his time to aspiring poets at Bagel Etc.; in the ’70s he bought a duplex across the street, in front of a park whose main occupants are loitering pigeons and old Portuguese men.

Mordecai Richler wrote about anti-Semitism in Quebec. In documenting the ramblings of noted Quebec political and religious luminaries of yore, and grafting them to the modern day nationalist movement, he seemed to be saying: the bastards are everywhere, and we’ve survived despite them.

MORE: Brian D. Johnson on how we loved Cohen—which is to say, fiercely

But many Jews, Cohen included, saw common cause between Jews and those who would become les Québécois in the feverish nationalism of Quebec’s Quiet Revolution. “[We] shared an affinity with French Catholics, for religious traditions that were thickly esthetic and that we, each in our own way, both loved and loved to distance ourselves from,” Bernard Avishai wrote in The New Yorker last year.

Richler died in 2001. For his efforts, and the apoplexy they provoked amongst many francophones, Montreal named a gazebo after him. In death, Cohen will merit more: a street, perhaps. Maybe even a cathedral.