When the pandemic wiped her high-profile gigs off the calendar, the Juno-winning musician and her bandmates took to the virtual stage 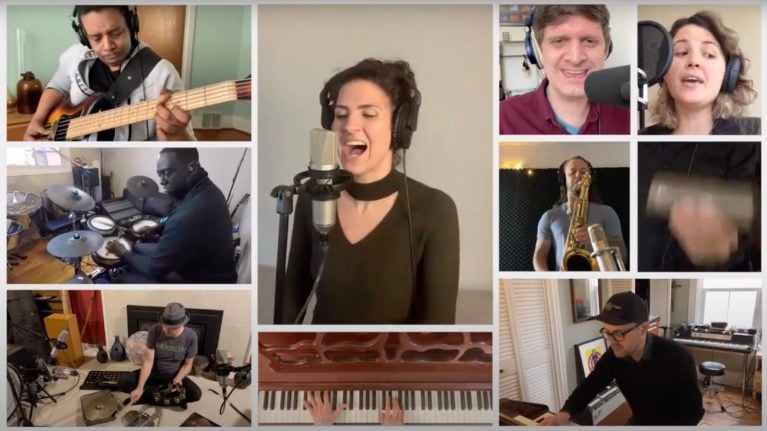 It was a pretty good plan, back when people were still making make plans. In March of 2019 Toronto singer-pianist Laila Biali won a Juno award for jazz vocals. A year later she was all ready to follow up with a new album, Out of Dust, and three months of touring in Canada, the United States and Europe.

Then the world went into pandemic lockdown. Out of Dust hit the market on schedule on March 27, but a series of high-profile gigs were wiped off the calendar. So was the chance to share her new music with audiences.

It’s a story that’s being repeated in countless variations across music and the performing arts. But Biali chose to view the crisis as a challenge.

“Because we can no longer bring this music to physical stages around the world, I thought I would create a virtual stage,” Biali told Maclean’s.

So Biali’s husband, producer and drummer Ben Wittman, sent music scores to every musician who’d played on the album. Playing from their homes in the Toronto region, Wolfville, N.S. and Brooklyn, they recorded their parts while shooting video of themselves. Wittman mixed the audio into a complete recording. Nick Collingwood and Halla Creative in Brooklyn edited the images into a band video.

None of the performances were altered or overdubbed after the fact. It’s as close to a live performance as we’re going to get for a while.

“It’s tough to not be on the road right now. Live performances bring the music to life,” Biali said, “and connection with audiences is what motivates me as an artist.” But with what Biali and Wittman call “Quarantunes,” they’re finding ways to play and connect across the solitude of a global lockdown.

This is the first appearance of Biali’s Quarantunes video for her song “Sugar.” Other video versions of other songs from the new album will be released in weeks to come, along with older tunes from her previous recordings. The band might even start taking requests, Biali said.