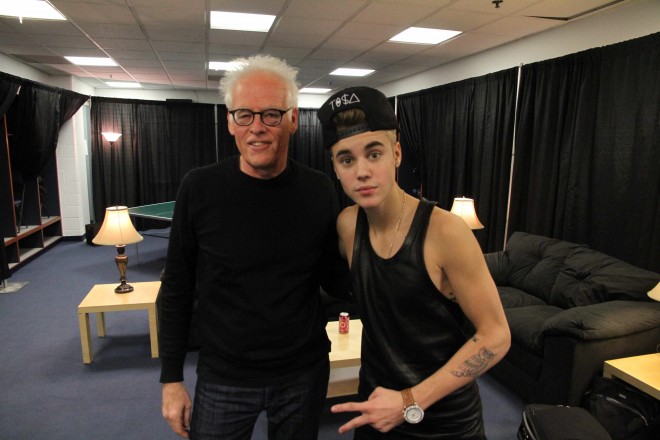 There’s something perverse about sending a guy old enough to have seen the Beatles play Maple Leaf Gardens on a mission to interview Justin Bieber. I’ve interviewed my share of music legends—Mick Jagger, Keith Richards, Madonna, Bryan Adams, Neil Young, Leonard Cohen, Tina Turner, Gordon Lightfoot, k.d. lang, Shania Twain. But for some reason I felt more apprehensive about talking to Bieber.  Not because I was starstruck. Just unqualified. It didn’t matter that I’d spent longer on the road as a professional musician than he has (five years back in the day). This was another world. Even after immersing myself in Bieber’s music and reading anything I could lay my hands on, meeting him was like visiting a luminary from an another planet. Then again, I can’t remember the last time I had an extended conversation with any 18-year-old, never mind a fabulously wealthy, successful pop star prodigy with 30 million Twitter followers and 3 billion YouTube viewers. 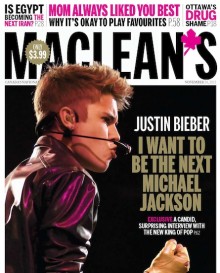 Here are some reflections on our interview, with outtakes that didn’t make it into this week’s Maclean’s cover story, which is on newsstands now:

We met in his dressing room backstage at the Verizon Center, an arena in downtown Washington D.C., on the eve of the presidential election, five hours before he hit the stage. I had half an hour. He was getting dressed in front of a mirror when his bodyguard, Kenny Hamilton, ushered me in. I averted my eyes until he was decent.

When you do a celebrity interview, you always look for a spontaneous moment to break the ice, or generate some narrative. So when I spotted the ping-pong table, I mentioned I used to be pretty good. Jumping at a chance to play, he handed me a paddle. It was one of those really heavy foam jobs. For the life of me, I couldn’t get the ball to stay on the table. He gamely tried to feed me lobs, and conceded that you could tell I once knew how to play. “This isn’t working,” I said, as I threw in the towel, worried I’d frittered away my precious time slot before we got a rally going.

As he took a seat on a couch, and I flicked on the recorder, Bieber came across as a polite, sweetly sincere Canadian. He spoke of his music and ambitions with a cautious candour, not unlike a media-groomed athlete. Possessed with a quiet poise and a refreshing absence of irony.

I asked how a typical day on tour unfolded: “I wake up around 12 or 1,” he said, “then spend the morning either working out or just resting, and have a meet and greet at 4:30, then go onstage at roughly 8:30, and that’s every day for the rest of the time I’m on tour. I just love performing each night, getting better and doing different things.”

Bieber talked a lot about the importance of hard work and professional guidance: “You gotta know how to keep your mind right and that’s by keeping the right people around you and being reminded of what’s important, and never losing sight of the passion and drive behind why you do what you do,” he told me.

“Whenever I don’t want to do things and I’m frustrated, I just remember this is what I chose because I love what I do. Whether it’s a long eight-hour photo shoot that I don’t want to do – what do I need to do a photo shoot for?— I want my mind set to push through it and get it done and be the best. Kobe Bryant shows up three hours before everyone else and does his own practice before everyone else, then stays later and does a practice after everyone else leaves. That’s the type of mind set that I want.”

Not just a musician, Bieber commands a massive business empire. But he lets others take care of the details. “Everything is done for me, because I’m not interested in doing it,” he told me. “But everything comes from my brain and what I want. If they come to me with a fragrance I don’t like, I’m not going to say ‘Put it out there.’ All the business decisions, all the different apps that I invest in, I make sure that I like them. That’s a good model: don’t do it if you don’t like it.”

Although the publicist had ordered me not to ask about his girlfriend, I was curious about how being a sex symbol adored by thousands of screaming girls every night jibed with his Christian faith. His mother says she has abstained from sex ever since she split from Justin’s father when he was 10 months old— she hasn’t remarried and believes premarital sex is immoral.

“What are your views these days on premarital sex?” I asked Bieber.

“That’s a question you shouldn’t be asking,” he replied, without hesitation, a glint of steel cutting through the puppy-dog gaze.

My immediate reaction was to apologize.  I thought, OMG, I’ve just violated the privacy of a teenager, as if I asked him to state his sexual preferences.

“No hard feelings,” he said.

Only later did I realize: Wait a minute, I didn’t ask if he was having pre-marital sex, with Selena Gomez or anyone else. I just asked his views on the matter. Bieber is in the “Let me be your boyfriend” business, and flirting with thousands of girls every night. So the question is not exactly off-topic. But there’s something intimidating about talking to someone that young who is endowed with so much power and confidence. In  horror movies there’s nothing scarier than a child with supernatural powers. Not that Justin is a child. Sorry, I keep forgetting he’s now 18 .

I did, however, get him to discuss singing about love and heartbreak with a maturity beyond his years.