Barbarian Lost excerpt: When the Trudeaus went to China

What Sacha and Justin witnessed in the aftermath of Tiananmen 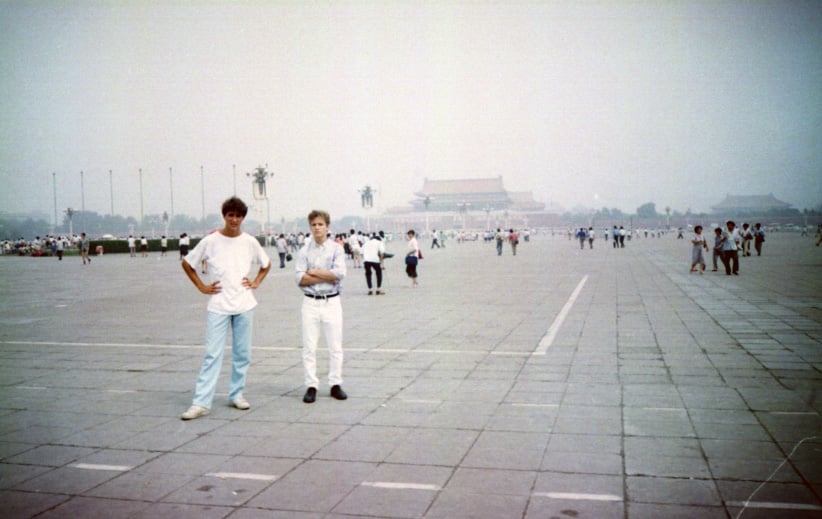 Sacha Trudeau and brother Justin in Tiananmen Square during a visit to China with father Pierre Trudeau in 1990. (PMO)

For Alexandre “Sacha” Trudeau, contemplating his father’s book about his first visit to China (Two Innocents in Red China) and listening to his mother’s stories about her visit there while pregnant with him made the Middle Kingdom the place he most wanted to see. In his new book, Barbarian Lost, Trudeau chronicles his experiences there. In this excerpt, he recalls his first time in China in 1990, accompanied by a past and a future prime minister of Canada, his father Pierre and his brother Justin:

It was decided. We’d go to China. My father probably knew deep down that we had to go then or we’d never go, not as a family at least. I was 16; my older brother, 18. My little brother had already found the Canadian wilderness a far more enticing place for him to journey than faraway lands with his father and brothers. Soon we’d all be out travelling on our own.

Looking back, I realize that the thought of this made my father lonely. He had always encouraged us to set out into the world, to seek its challenges and mysteries. But he’d been caught off guard by how fast we’d grown. Perhaps he felt that he’d have little time left to teach us lessons or to share in our learning. So China it was, a place that had taught him so much. A place to impart something meaningful and lasting to his boys.

Only a year after Tiananmen, the country still had bleak undertones. But I did have my wish: there were practically no other foreigners to be seen there. The tourist hotels were empty. Although the country had already embarked upon the road to economic liberalization and growth, some of the characteristics of earlier Chinese periods, such as stark authoritarian rule and a lack of contact with the outside world, had reappeared following the crackdown at Tiananmen. The China of 1990 was more like the Red China of yore than the economic powerhouse it would soon become. The winds of change were momentarily stilled.

As my father predicted, the Chinese did not let us travel alone in their country. “We wouldn’t want you to hurt yourselves,” they told us.

So we were hosted by the Chinese on an elaborate private tour. We saw many parts of the country but were guided everywhere. As we moved across China, we were passed along from official to official, keeping at all times a retinue of an officer of the foreign affairs department and a translator. It was a rare if stodgy trip.

Among the things my father most wanted to see were the sacred mountains of China. He also talked of a train trip from the Sichuan plateau to the subtropical Himalayan foothills of Yunnan province.

I remember not quite getting a handle on the idea of the sacred mountains. In my mind, I pictured the rocky bluffs in the clouds I had seen depicted on the scrolls hanging in our house. I pictured the stone palaces of the Heavenly Emperor where the Monkey King went to steal peaches.

We ended up climbing two of the sacred mountains. Our first stop out of the capital, Beijing, was Taishan—apparently one of the more famous of the set. It rose from the plain such that as we approached we could see it in its entirety like an archetype. From afar, the mountain’s numerous temples were tiny white specks on an immense mass of green and blue. It was exciting to think we would reach the summit later that very day.

But arriving at the base of Taishan, we learnt that our Chinese guides had underestimated my father’s physicality and arranged for a cable-car ride to the summit. My father protested and a compromise was soon reached: we would drive halfway up the mountain on a service road but climb the final distance on foot.

The ascent was an occasion for my brother and me to burn the excess energy that had been building up during all the formalities of Beijing. At a temple that was almost entirely transformed into a bazaar for Chinese tourists, we were too impatient to pay proper attention to the strange spectacle of an ancient Taoist monk roused from a deep, dark chamber by our handlers. The monk seemed easily a hundred years old and could barely see through his thick cataracts. He was draped in black and blue robes and hunched over. His skin was blemished, and his whiskers, though hardly numerous, were half a metre long. He reeked of urine and strange herbs. For a moment, we were in awe of this old man of the mountain. But our own mission on the mountain beckoned us and soon we were continuing our ascent, hastily scrambling up the stone stairs.

The mountaintop was mostly bare, and it was windy. A few temples were scattered about. Primed and ready for more action as we waited for our father to catch up, Justin and I soon concocted a plan to run down the mountain, meeting the group at the bottom. The initial descent was treacherous, the stone stairs narrow and extremely steep. We proceeded down them sideways in a kind of fast trot. The more we dropped, the more the mountain levelled off and short flights of stairs began to alternate with narrow landings. So we jumped down each flight, covering multiple stairs at once. We sprinted across the landings and leapt out again over the next section. We felt incredible and figured we must be setting some kind of record.

Gallivanting down the sacred mountain, we had no thought of the toll our antics might take on our bodies. Soon after our arrival back at the hotel a few hours later, it caught up with us. By dinner time in the hotel restaurant, Justin and I had trouble holding up our heads or even lifting the chopsticks to our mouths. We were both shivering, and our legs had seized up and trembled spasmodically. We retreated to our rooms; I fell asleep immediately.

In the morning, I could barely get out of bed. My legs were stiff as wood and could not be bent. My back had also seized up and resisted straightening. I called on my brother. He was in a similar state but had just come from breakfast with our father, who was not amused and was expecting me in the dining room. So, one tiny step at a time, I walked toward the restaurant. For my own sake and to deflect my father’s ire, I decided that it was a humorous predicament and made light of it.

Later that day, as Justin and I hobbled from the car to some tourist site we were visiting, my father pulled us aside and said, “Boys, you must not forget, the Chinese have often perceived Westerners as barbarians. Think carefully about those occasions when you might be giving them good reason to do so.”

In the years that followed, I became a traveller myself. I journeyed to war zones and uncharted hinterlands. China remained on the horizon, a distant figure whose call I ignored. I heard about the profound metamorphosis it was undergoing but felt I was not yet ready for it. I was ever the barbarian whose travel skills were no match for the Middle Kingdom. The journey would have to wait.

Excerpted from Barbarian Lost: Travels in the New China by Alexandre Trudeau ©2016. Published by HarperCollins Publishers Ltd. All rights reserved.