Best of Netflix Canada in April: The three things you should watch this month

What should you watch from the long list of TV shows and movies arriving or departing from Netflix Canada in April 2019? Our critic makes his picks (plus a bonus for HBO Canada watchers) 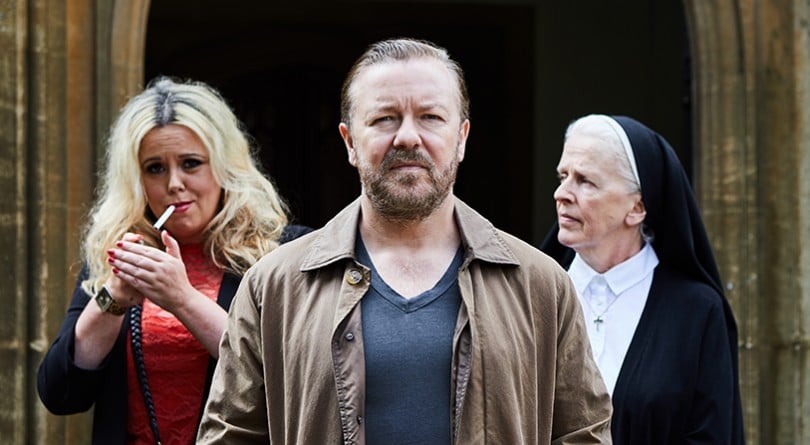 The Office (U.K.) is one of the most hilarious and enduring accounts of working life ever made. Sadly, in subsequent years, co-creator Ricky Gervais has revealed himself to be a person who shares some of office manager David Brent and sales rep Finchy’s obnoxious qualities. Gervais’ projects without Office co-creator Steve Merchant aren’t nearly as good; he has untempered license to be indulgent, gratuitously uncouth, obvious and mawkish. After Life sees Gervais back in his familiar saddle playing Tony, a depressed journalist, suicidal after his beloved wife Lisa dies of cancer. Tony is employed by The Tambury Gazette, the most overstaffed community newspaper in England. Manager Matt tolerates his employee’s brazen boorishness because he’s Tony’s brother-in-law. Criticisms aside, After Life is worth watching, at least for Gervais completists. There are genuine laughs, flash tunes, and, later in the season, a couple of warm fuzzies. After Life is streaming now on Netflix.

“Did Robin Hood ever shoot a gas station attendant point-blank in the head for a tank of gas and four dollars ten?” It’s a snappy perspective from real-life thirties Texas governor Miriam Amanda Wallace “Ma” Ferguson (Kathy Bates), and it raises fair questions about crime duo Bonnie and Clyde. In The Highwaymen, Ferguson orders two retired Texas Rangers on the trail of the serial killers mythologized by Warren Beatty and Faye Dunaway. Kevin Costner plays single-minded lead Ranger Frank Hamer; Woody Harrelson his more complicated partner Maney Gault. This ain’t True Detective or even Three Billboards, but Harrelson remains reliable for law and order types. His notable lines include “A lot of nerve you’ve got trying to rob a fellow while he’s getting some pleasant relief.” Lone Star native John Lee Hancock directs with an eye for Great Depression era detail. Though occasionally a tad dour, The Highwaymen is a solid old-school crime drama, and an interesting companion to Bonnie and Clyde. It also puts Ma Ferguson on the radar as someone who maybe deserves a film of her own. The Highwaymen is streaming now on Netflix.

Sweepingly charismatic as he can be, some of Tom Hanks’ roles—think Forrest Gump—haven’t dated the best. Captain Phillips’ remains one of his most empathetic, potent performances. Hanks illuminates the redoubtable captain Richard and his crew’s harrowing real-life kidnapping by Somali pirates armed with AK-47s. Barkhad Abdi, who plays chief Somali pirate Muse, is similarly magnetic. It’s riveting action and suspense, spiked with socio-political commentary. In one dramatic exchange, Muse tells the Cap “I’ve got bosses.” “We’ve all got bosses. There’s gotta be more than being a fisherman or a pirate,” Phillips responds. “Maybe in America.” (Earlier, Phillips laments his son’s work prospects in the increasingly taxing corporate environment where they want everything yesterday.) Director Paul Greengrass’ films about 9/11 (United 93) and Norwegian neo-Nazi terrorism (22 July) are problematic, but he nails Captain Phillips. Technically, the film excels, the MV Maersk Alabama all at sea, shot by cinematographer Barry Ackroyd. The raw, true humanity of Greengrass’ cast, especially Hanks, make Captain Phillips mighty. Captain Phillips leaves Netflix on April 21.

After definitive documentaries on WikiLeaks and Enron, Alex Gibney is well perched to document Elizabeth Holmes and her Theranos scam with The Inventor. Holmes is depicted as a delusional narcissist with an unsettling voice who believed she could conquer the world through tiny vials of blood and a magic diagnostics box. Her lies and bravado suckered investors like Betsy DeVos and illustrious non-medical board members into making Theranos a nine billion-dollar company. Theranos’ medical testing expert, Ian Gibbons, was treated disrespectfully, and eventually committed suicide. Gibney directs with solid visual and musical chops, assembling smart talking heads and insiders like whistleblower Tyler Shultz. The Wall Street Journal‘s John Carreyrou, who wrote the journalistic takedowns and book Bad Blood, is another insightful interviewee. The Inventor raises weighty issues with wider contemporary implications: elite ignorance and corruption, emotional narrative winning over data and evidence, the irrationality of investors and how Silicon Valley’s false dogma can transcend physics and reality. The Inventor puts on full display the dangers of the ‘fake it till you make it’ mentality. And as with his work for Harvey Weinstein, this is a bad look for Theranos lawyer David Boies. The Inventor is streaming now on HBO Canada.