Best of Netflix Canada in September: The three things you should watch this month

What should you watch from the long list of TV shows and movies arriving or departing from Netflix Canada in September 2018? Our critics make their picks 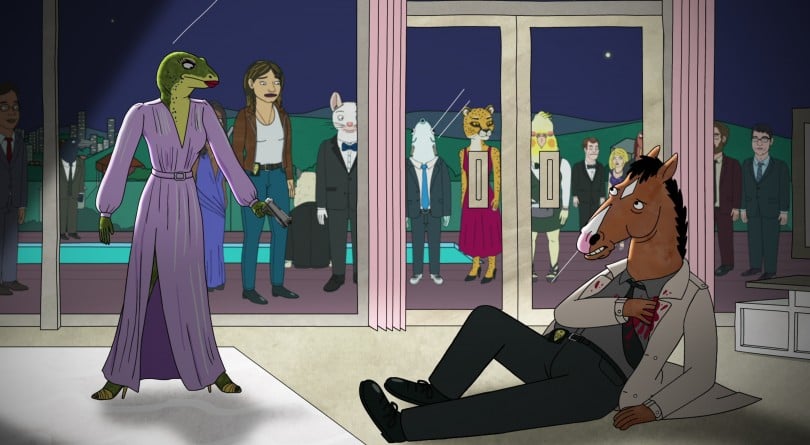 There have been, in the last year, a fair few swings-and-misses when it comes to Netflix’s original programming. The buzzy 90’s-nostalgia bildungsroman Everything Sucks! failed to find an audience; the cancelled Disjointed somehow turned Chuck Lorre gold into so much straw, for what feels like the first time in TV history; Friends From College was as unfunny as it was predictable; meanwhile, Netflix’s plodding, joyless moneymakers coming out of Marvel Studios continue to be churned out apace. In short, Netflix has stumbled lately when deploying the traditional ways TV and movies have been made in the last few years. Its animated originals have been particularly poor since Big Mouth: Disenchanted, the buzzy new fantasy-themed show from Simpsons creator Matt Groening, is the worst kind of pastiche, in that it’s a toothless, safe retread of Groening’s own work, using the exact same archetypes of Futurama and jokes ripped from The Simpsons‘ more comedy-adjacent seasons.

So it’s a timely moment for Bojack Horseman, arguably the finest Netflix Original series—animated or no—to return for its fifth season. Yes, it’s part of that set of “comedies in name only” (CINOs?) which include as many jokes as grindingly sad moments of despair or heartbreak. But it is unique in its approach, thanks to the remarkable world-building it’s done to create a Hollywood that’s familiar, if not for all the animal-people that inhabit it. Rapid-fire puns, and hilarious meta satires and lowbrow cracks about the animal kingdom live alongside the often-bleak storyline of the titular character (perfectly voiced by Will Arnett), a humiliated actor from a successful TV sitcom enduring professional misfires, a self-destructive love life and familial collapse, and who you both detest and root for. Whether this is the season where Bojack’s infinite capacity for despair and self-immolation begins to wear thin on audiences is yet to be seen—five seasons is when shows can begin to lose their momentum if there’s no enormous evolution, though last season’s parenthood-centric plot line counts as a major step forward in the stories this charmingly animated vehicle can tell. All the same, four years of excellence has more than earned Bojack Horseman the opportunity to lead us to water again. Season five premieres in full on Sept. 14.

The key to a truly great action film, it turns out, is chemistry—which is why Lethal Weapon was never my favourite from that late ’80s/early ’90s golden era. That might seem like a contradiction; after all, the 1987 movie features perhaps the most legendary pairing of any action movie (name a more iconic duo, I’ll wait). But the movie’s core relationship, between Roger Murtaugh (Danny Glover) and Martin Riggs (Mel Gibson), has always felt like the most forced, implausible and baffling part of the film, and we’re talking about a movie in which the major villain is captured after nearly blowing up an entire neighbourhood, only for the LAPD to let him try to win his freedom through hand-to-hand combat.

That’s what makes the Fox TV adaptation so impressive: it took a pairing that formed the bedrock of an established movie franchise and, by adjusting it at the edges, made it better. By casting Damon Wayans Sr. as a Murtaugh who’s not-so-old but still too-old-for-this against Clayne Crawford, who embodies a charming Texan version of the cop with plenty of demons but nothing to lose, the pair don’t just buzz with on-screen chemistry—the sparks of their rocky partnership actually make a little sense. Of course, this became ironic after reports of the show’s implosion during this second season, with Crawford being fired over allegations of off-camera tirades and a bitter feud with Wayans—but if Fleetwood Mac’s Rumours is proof of anything, it’s that popular art can come from deep enmity. Bucking the usual narrative, this TV adaptation is actually the best thing to come from the movie franchise—a slick, high-production blow-’em-up that’s oddly satisfying on an episode-by-episode basis, despite occasionally (and traditionally) cringeworthy dialogue that are made less distracting because of the buddy-cop duo. Though the show will go on with Seann William Scott set to play a new character, it’s unlikely that there will be good seasons left after this, with a Riggs-less Murtaugh on his own. Season two comes to Netflix on Sept. 26.

When considering this 2003 rom-com, it’s best to ignore the implausible scenario and the outrageous gas-lighting that’s done by both members of the primary couple. That seems like a lot to ask, but that’s the baseline ask that any of the movies of this genre and era require, given how central both tenets are to the form (perhaps never more infuriatingly so than in the case of You’ve Got Mail—but I digress). Do that, and you’ll find that How To Lose A Guy In 10 Days is largely fun and fairly inventive in its zaniness, pitting an ad executive (Matthew McConaughey)’s boast that he could make any woman love him against a magazine columnist’s (Kate Hudson) plan to write about how to drive away any lover. Hijinks ensue, of course, leading up to a climactic motorcycle-chase reunion that deserves to be more iconic in the oeuvre than it is.

If it doesn’t seem like the most enthusiastic review, you’re not wrong; there’s plenty that’s frustrating about this movie (and again, it should be said, about many of the classic rom-coms of the time.) But I can’t in good conscience recommend Jurassic World—perhaps the only other departing film of note this month—unless you might enjoy a movie that feels like it was swallowed by a T-rex more than 66 million years ago, regurgitated, left to fossilize, and then rediscovered so as to apply even more ancient gender stereotypes by having Dallas Bryce Howard flee dinosaurs in heels. Just go watch Four Weddings and a Funeral, probably the ur-film of its genre. Netflix audiences will lose How To Lose A Guy In 10 Days on Sept. 1.