Cosby's handlers are spreading the bogus idea that women regularly level false accusations. But save your outrage, advises Anne Kingston, because the whole thing is a smokescreen. 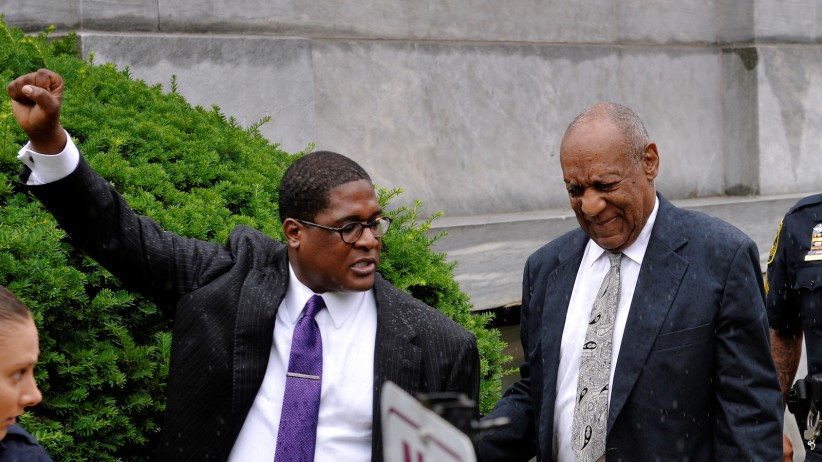 By now we should know that every utterance from Andrew Wyatt—Bill Cosby’s indefatigable publicist—should be taken with a kilogram of salt. This is the fellow who dangled the prospect of Cosby’s two wives and TV family showing up to support him in court. Didn’t happen: Cosby’s wife, Camille, appeared one day for an hour and a half to hear the defense’s six-minute case and its closing arguments; Keshia Knight Pulliam, who played Rudy Huxtable on The Cosby Show, appeared alongside Cosby for a splashy photo op on day one and stayed in court for the morning only. Throughout the trial, Wyatt was a busy bee. His mid-trial claim that Cosby might testify made headlines, though the prospect of that was about as likely as NBC asking Cosby to star in a family-friendly sitcom. Wyatt’s ceaseless shilling for his client outside the courthouse succeeded in garnering coverage—seen in that heart-warming story of Cosby “fans” visiting the fallen celebrity. Wyatt’s plea during jury deliberations that jurors be released due to the toll it was taken on them earned Cosby’s legal team censure the next day from a judge who was furious the case was being tried in public.

Now, post-trial, Wyatt’s spin-cycle is on high. That we saw with his claim on a morning talk-show Thursday that Cosby intends to embark on a “town hall” speaking tour to educate men on how to avoid sexual assault allegations, especially athletes. Wyatt was accompanied by his associate Ebonee Benson; she added that “people need to be educated” about sexual-assault laws because “anything … can be considered sexual assault….this is why people need to be educated on a brush against the shoulder.” Benson also sounded an alarm that the window for women to make false claims was growing: “The statute of limitations for victims of sexual assault are being extended,” she warned.

All of it, of course, is equal parts risible and ridiculous—right up there with Sweeney Todd offering safe shaving tips, or Donald Trump schooling people on common decency. Benson’s “statute of limitations” comment wins high marks for audacity: she failed to mention that statutes for reporting sexual assault were extended in several states as the direct result of the deluge of historic accusations against her client. Of course, Wyatt’s gambit worked. It received widespread coverage and predictable social media outrage.

When I saw the claim yesterday, my first thought was to tweet it out with a snarky caption. I stopped myself. After weeks of being submerged in Cosby spin, I had no interest in giving it oxygen, particularly when it’s intended to influence an ongoing judicial process—and reduce the gravity of sexual assault to a brush of the shoulder. The suggestion that Cosby is about to embark on a “victim’s speaking tour” is part of the victim narrative Cosby’s team began building the day the mistrial was announced. Wyatt’s claim also suggests the trial is over and Cosby is vindicated, free to share lessons learned. Rubbish. As the judge told Cosby in court, he remains under the conditions of his bail; he’s still facing three charges of felony aggravated indecent assault; the second trial could happen as early as the next few months.

Cosby didn’t testify at his first criminal trial for the obvious reason that putting him on the stand would make him vulnerable—to inquiry about his admitted habit of giving sedatives to women he wanted to have sex with; to questions about the dozens upon dozens of women who have reported that Cosby drugged and assaulted them. The notion that defence lawyer Brian McMonagle—if he remains Cosby’s defence counsel for trial two—would permit his client to sound off in public with potentially incriminating statements is laughable.

Of course, many did felt the need, even the responsibility, to express anger and frustration at the announcement. RAINN (Rape, Abuse & Incest National Network), American largest anti-sexual violence organization, issued the following statement: “It would be more useful if Mr. Cosby would spend time talking with people about how not to commit sexual assault in the first place.” Hundreds of less polite variations can be found on Twitter.

There’s a more important reason to repudiate Wyatt’s spin. Repeating it feeds a rape-culture narrative—that false claims of sexual assault are a problem from which men need to be protected, which isn’t true. Studies peg false allegations between two and 10 per cent; others report it at two to eight per cent. We do know most sexual assaults are not reported; few make it to court. When they do, the adversarial nature of trying he-said, she-said cases, as seen in the Cosby trial, effectively puts the alleged victim on trial as well. The idea that Bill Cosby can offer the public education at this point on anything but how a wealthy, famous sexual predator could evade  consequences of his behaviour for decades is ridiculous and pernicious. It also   thrusts the spotlight back on a man who hopes it will serve his interests. Don’t fall for it.