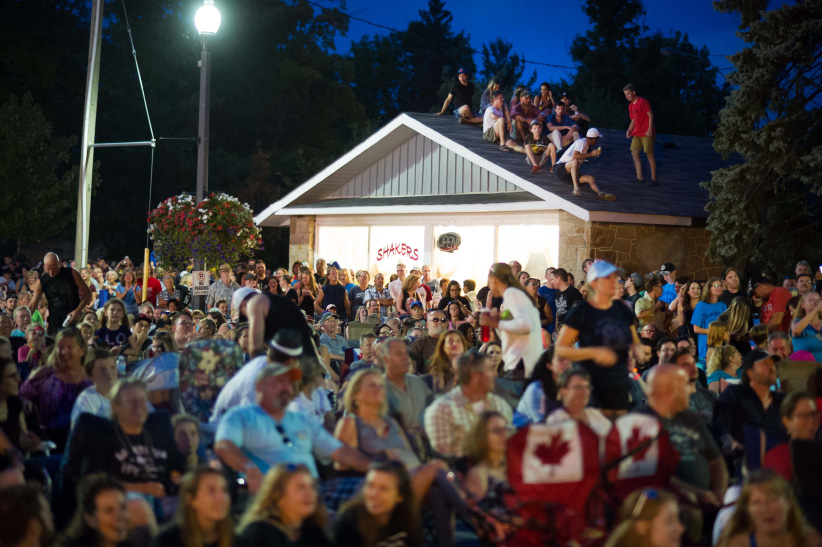 A little after 9 p.m., the crowd is triple decker, cradled in lawn chairs, bobbing on foot and tipping over rooftops. The concert is broadcast across jumbotrons, the music exceeding noise bylaws, and spectators are still waiting for one particular song.

Bobcaygeon has repurposed its main drag into a satellite concert venue, where about 5,000 people are watching a public screening. They could watch the same CBC footage from home–in Ottawa, Toronto, wherever they’re from–but they’ve made a pilgrimage to Bobcaygeon, the namesake of the Tragically Hip’s beloved 1999 song, in pursuit of a certain vibe. Richard Hunswicks of Mississauga, who set up a rocking chair in the second row, explains, “It’s something spiritual.”

The moon hides behind clouds, as if setting. Rain holds. Wind topples the inflatable jumbotron, which acts like a sail. Beach balls are crowd surfing. People wave their arms, their caps, their babies. They cheer for Gord Downie, for the drone overhead, for the resurrection of the jumbo screen. They lick ice cream, screaming for the Tragically Hip.

Bobcaygeon is simply fanatical, even Scott Davidson, the local funeral director. In 1992, he skipped studying for his funeral director’s licensing exam to watch the Hip open for Rush in Toronto. When the band plays the town’s most anticipated song, Davidson says, “We’ll go a little bit nuts.”

MORE: On the Tragically Hip’s last stop: ‘This is carpe diem’

Sidewalks are clogged like Air Canada aisles, but nobody gets hip checked. A minor difference of opinion occurs when a driver, who didn’t get the memo, gets the middle finger. Otherwise, the focus is music. At the very back of the crowd, Dave Axon elevates himself with his cooler. He left his daughter’s wedding reception early to find the family a viewpoint—“an advanced scout,” he says.

By 10:30 p.m., “Bobcaygeon” still hasn’t played. Zonked children start gazing into space. Some fans start to worry. The Hip hasn’t performed in Bobcaygeon since 2011, when they sold out a cornfield, and they haven’t played the tune on their current tour until near the end of shows. “Let’s hope they play that song tonight,” says Brian Junkin, a city councillor. “There’s always the possibility they won’t.” 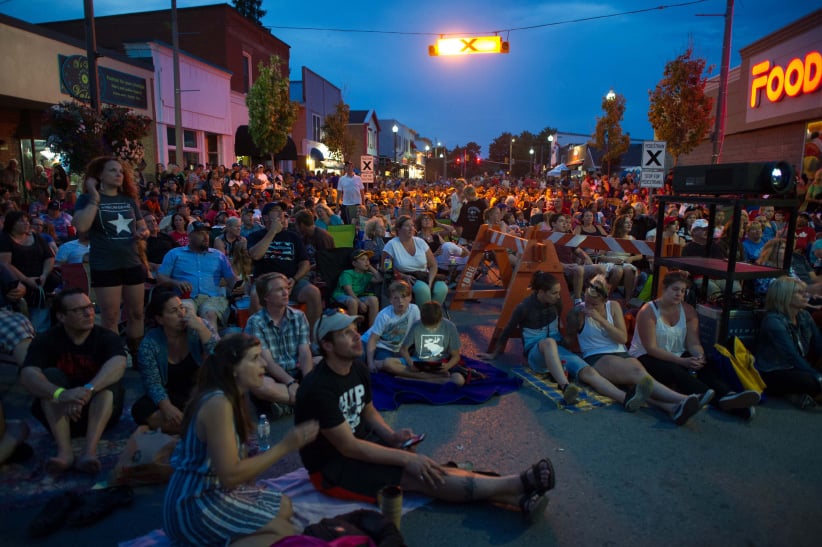 They do. After “Poets,” the second to last song on the set list brings glory. The crowd transforms into one. The sitters are standing; roof toppers leaning down. Kids fly up onto parents’ shoulders, creating kabobs of heads. “Cause it was in Bobcaygeon,” sings Downie. “That I saw the constellations,” mimics the crowd. Altogether now. Bobcaygeon belts, breathing in sync.

“It’s reverent,” says Kathleen Seymour-Fagan, another city councillor. Davidson bobs, his toes dancing in his Birkenstocks. He is fixed onto one set of coordinates amid 360 degrees of Canadians, flying flags on their backs like discombobulated Olympians, moving hip to hip.

“Bobcaygeon” ends, but Bobcaygeon is still singing it. The band proceeds to the last of its pre-encore set list, a song from its 1998 album, Phantom Power. Davidson focuses his ears for a moment. “No,” he says, “I don’t know this one.”