Here's Nico Branham's winning entry, 'Outside the Window, a Billion Stars Are Moving Past Me at the Speed of Light' 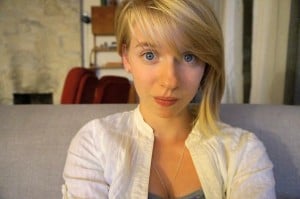 An essay by Nico Branham, an 18-year-old filmmaker from Vancouver’s Templeton Secondary School, was chosen from 400 other submissions from high school students to win the prestigious 2015 Hilary Weston Writers’ Trust student non-fiction writing contest this morning. The $2,500 award comes with $1,000 for her high school. Branham also gets an invitation to the writers’ trust gala in the fall, where she will be celebrated alongside the winner of the adult prize for non-fiction, which comes with a $60,000 purse. Branham will be starting a degree in motion picture arts in September. In her spare time she enjoys reading —her favourite writer is Lev Grossman—and watching coming-of-age movies. Here’s her essay, which the jury lauded for “its contemporary tone, creative structure, and its unabashed erotic and intellectual honesty.”

Outside the Window, a Billion Stars Are Moving Past Me at the Speed of Light

Fade in: it’s just me, sitting here, staring at a computer monitor. The glow from the screen is lighting up my face. I wipe my hair off my forehead and chew on my bottom lip. Outside the window, a billion stars are moving past me at the speed of light.

Cut to me, ten weeks ago, getting kissed and coddled by high school crush Kaley, while high school boyfriend Zack sits on the floor and watches. Kaley brings me a glass of water, watches me drink it — I’m holding it with two hands. The hottest mother figure I’ve ever laid eyes on. Tipsy and distracted, I slosh the water onto my sock. Cut to me, walking home with one of my own socks on, and one of hers. She wears my wet sock home. I still have hers, in my dresser drawer, right next to all my panties. It almost matches my other black socks, but not quite.

Real life and the biopic of a real life are planets in different solar systems; neighbours in the bigger scheme of things, but miles and planets and stars apart when you’re stuck in one, and trying to get into the other.

What I mean is, there’s a gap that seems minute, but is actually mammoth, that separates real life from what life is like in the movies. Real life will never be as good as it could be if there were writers and directors and better lighting and great sound and everything was cut together just right. Here on the polluted, corrupted, boring planet of real life, the important moments just waste away, while the all-too-f–king-shitty parts drag on and on, and it feels like everything is just a little bit under reaching its potential.

And it’s not that I want a perfect life — I just want a more thought-out plotline. I want to cut the part where potential best friend Levi’s mom has cancer, and decide that the scene where I hit rock bottom in a bloody high school bathroom doesn’t need to be there. I want everything in my fridge to be a part of who I am as a character, and I want to be consistent in my attitudes, thoughts, actions. I want someone who loves me writing the script of my life instead of just me — writing myself, playing myself, directing myself. I need someone else to take the reins and use every scene to move my story forward.

Cut to me, four months ago, lying on high school boyfriend Zack’s bed with a ball of unbreathed air in my throat. Cut to me, tears running down my face so fast I can’t believe he doesn’t notice. And then he does, and he scoops me up into his arms, and I squirm like a pathetic invalid. Cut to me, being too big to be carried that way. Cut to Zack, putting me back down. Cut to me, being put back down.

Cut to me, on New Year’s at best friend Mica’s party, music thumping. I’m half lying, half sitting on the bed, and best friend of best friend Han is lying beside me. Zack is off drunk somewhere. I speak my first line.

Eventually, the fast life would come to a screeching stop when I decide to write my masterpiece movie. I would lay off drugs, sex, and coffee, and put away all my boy clothes. I would dye my hair back to brown, wear crocheted blouses, and water all of my plants. Once the script was done I would send it away, and I would become something new. And I would keep becoming someone new after I accomplished something new.

Cut to me, a week ago, not speaking, standing at the sink at work. Twenty-six-year-old co-worker Max enters. My internal monologue pushes ideas of his hand brushing my hair off my face, thoughts of his not caring if I’m misted with dishwater, it not mattering that he’s gay. My external monologue is virtually non-existent.

The movie of my life would be gritty, I think, and hazy and sexy and depraved, and it would have this kind of floaty feeling — the audience would have to feel connected to me, but I would keep them at arm’s length, which would only make them more interested.

My real life is not gritty, more like slippery, and it’s not hazy or sexy, it’s out of focus and clammy, and it’s not depraved in an art-school, sex-fuelled, drug-fog kind of way. I’m living an ordinary, realistic life.

Cut to me, yesterday after class, walking down the hall with prospective best friend Levi. Tilt down to my hands chewing each other raw, tilt back up to my eyes on his face. Internal monologue flatlines, we make plans for the future — fun plans, cool plans, new plans.

In the movie version of my life, I f–k every person I think about — I don’t know the difference between wanting to be with someone and wanting to be friends with someone. In real life, I still can’t see the difference, but I don’t do anything about it. I admire someone, I like someone, I feel close to someone — I think I want to be theirs. But then I’m not theirs, because I don’t ask if they want me.

I’m trapped by my own ideas, and trapped by relationships. I am trapping myself, though, because nobody’s writing my life but me. This is my problem: I want less control, but more control. I want off, off the ride, off the planet, off the path I’m on, but I won’t make myself stop.

Cut to me, three years ago, poised at the top of a cliff, my friends around, all urging me to just jump, just try it, it won’t be scary once I do it. It was scary, would have been scary, and will always be scary. My internal monologue won’t shut up.

Cut to me, tonight in bed, alone. No external monologue, internal one dull. Making lists, making plans, grasping at straws. Trying to find where my loyalties are, who’s my ally and who’s my enemy. Who do I owe and who do I want? This is where real life and biopic overlap.

I won’t push it because I don’t want those things. I don’t want sex or drugs or escapades, I guess — I don’t want to send myself into space, across stars, and into new places. Real life isn’t a movie — that’s why we have movies. I am not the same me as the me who is the star of my movie life, and I don’t know if I like that, but I know it’s true. So I guess that’s a start.

Cut to me, me, me, me. It’s my movie, after all. Cut to me five years from now, writing the same f–king essay for a different reason. Cut to me six years from now, seven, eight, nine, writing my story into screenplay after screenplay, trapped writing about girls who are trapped. I never launched myself into space, never hit the button. Never.

Fade out: it’s just me, sitting here, staring at a computer monitor. The glow from the screen is lighting up my face. I wipe my hair off my forehead and chew on my bottom lip. Outside the window, a billion stars are moving past me at the speed of light.