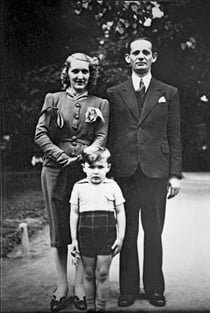 In Adrienne Clarkson’s new book, Room for All of Us, the former governor general weaves the personal stories of new Canadians with chapters on the conflicts that displaced the people and prompted them to seek a new home. In one of the most poignant entries, she details the early life of Fred Bild, a long-time employee of the Department of Foreign Affairs, former ambassador to Thailand and China, and Holocaust survivor. When Bild was six, his father was grabbed off the streets of Brussels; 30 years later he found out he had died in Auschwitz. His mother, who gave birth to his baby brother after her husband disappeared, decided to hide both boys, relying on the Red Cross to protect them for the remainder of the war. Bild spent two years on a farm near the small Belgian village of Lubbeek, spoiled rotten by eight brothers and sisters, none of whom had any children. In this excerpt, Clarkson describes the boy’s reunion with his mother.

Then one of the people who had helped bring him to Lubbeek went to find Fred’s mother. He had written her letters, which were sent to the abbé in Malines, and the abbé would get someone in Brussels to deliver them to her door. Every couple of weeks, she got a letter from her little boy, but he never got anything back from her—it was too dangerous for him to be receiving any letters, and she had no idea where he was.

Eventually, she arrived at the village. It was a very traumatic moment for nine-year-old Fred: although he hadn’t forgotten his mother, two years had passed and he had been very happy with his adopted family. But he did realize that in some way he was happy to see her. The worst thing was that now he’d have to go to school. His mother stayed for a couple of days and then left again to try to find his little brother, whom she had sent into hiding when he was 10 months old. She told Fred he would have to stay where he was because she couldn’t get ration stamps from the Resistance anymore and she had no income. She told him to be good and that she would come to visit him whenever he had holidays.

When Fred eventually rejoined his mother after the war, life in Brussels was a letdown; he missed farm life and his adopted family. He went back to visit them for Christmas and Easter and in the summers. Sometimes, he spent the whole summer with them, and he still felt very much that he belonged with them. He stayed in touch with them throughout his life until they all died. You can’t help but feel that these people became Fred’s true family because they provided stability and love instead of the tension and fear in which he had spent his early childhood. When he speaks of them, his eyes cloud with tears, and it’s evident the emotion they aroused in him is something he will never forget.

He and his mother lived in Brussels until 1948. His little brother had been sent through the same network to the same château [as Fred, a stop on their way to safe homes]. In 1944, the Germans had requisitioned the château to house soldiers and were told they could do whatever they wanted to be rid of all the children. A German soldier who heard this jumped on his motorcycle and raced to the château to tell Mademoiselle Sorrel to get the kids out of there immediately. Mademoiselle Sorrel [director at the château] and her helpers took about 50 children, including tiny babies, on the streetcar in the middle of the winter east to Namur, where contacts provided them with another château. All of them, including Fred’s brother, were saved.

When Fred’s mother remarried, she and her husband decided they would emigrate to Canada, and Fred, at age 12, was classified as a francophone. They came to Montreal, but because Fred was a Jew, he could not attend French school; you had to be Catholic to go to a French school. This is one point that Fred and I have in common: I wanted to go to a French school, and I couldn’t because I was not a Catholic. It made me even more determined to learn French when I got older. If I couldn’t learn French in Canada because I was Protestant, I would go to Paris when I grew up, which I did. Fred learned that Jewish children had to go to Protestant schools, so he was enrolled in a school in the Côte-des-Neiges area in Montreal, where he met a little girl called Eva Kornpointer.

Eva remembers Fred arriving in their class, a small boy who was very good in French but spoke little English. Fred declaimed poetry with gestures, and she saw how different he was. But obviously they always remembered each other, because when they met again at what is now Concordia University, when Fred was in his second year and Eva was in her first, Fred recognized her and said, “Hello, Eva Kornpointer!” She said, “Weren’t we at school together in Grade 4?” And he said, “No, Grade 7, with Miss Henry.” Fred made an enormous impression on her, and she says he has gone on impressing her daily for the last 56 years. They married when they were in their early twenties. He told her the story of his childhood soon after they met again, and whether that was one of the bonds that drew him to her and vice versa, they don’t say, but I feel it must have been.

They graduated from university together and went off to England. They married almost as soon as they arrived, because they realized they were going to be together forever and so might as well. He went to University College London and she to the London School of Economics. Fred became very interested in international law and considered joining some kind of international organization, but he wasn’t getting anywhere with the various letters he was writing, so he decided to apply to the Canadian Foreign Service exams at Canada House in London while Eva was giving birth to their first child. To their amazement, Fred was invited to the oral exam. He passed brilliantly, and they moved home in 1961.

Fred’s career was dynamic, and he served in places like Japan, Laos and Paris before becoming ambassador to Thailand at the age of 44. Later, in Paris, he served as minister counsellor when Lucien Bouchard was our ambassador to France.

Fred finished his career as our ambassador to China from 1990 to 1995. Fred now teaches at the University of Montreal, and on vacation he travels with Eva on a tandem bicycle in Europe. They recently completed an extraordinary trip around the world: avoiding airplanes, they travelled by bus, boat and train into areas they had never been to before. Growing up in Montreal, Fred was caught up in the language question in Quebec. He was forced to become an anglophone, first because he couldn’t attend French elementary school, and later because he was turned away from the University of Montreal as he had not gone to collège classique and completed his baccalauréat. He says that he did not become a francophone again until he joined the Department of External Affairs, now Foreign Affairs.

The question of identity is fascinating in a person like Fred, because he was uprooted as a child and then virtually adopted by people so different from himself. Until the age of four, he grew up as a Jew, in a Jewish community, in a town in Germany. He feels that he is Jewish, but says, “I do not feel one bit religiously Jewish . . . It’s not there for me.” He finds Judaism “interesting, but not a very attractive religion. It’s interesting because so much literature is based around it, born through it.” Perhaps because of his upbringing and because of his experience as a Canadian ambassador, Fred does not warm to things that are not inclusive. He believes that the most important thing to the Jewish people of his generation is their great achievement of survival. The survival itself forms their identity. He feels he has more in common with someone who has survived any kind of persecution than with someone who just happens to be Jewish. Fred went to a high school in Snowdon that was half Jewish, but felt he did not have much in common with his Jewish schoolmates, and none of them wanted to hear any of his stories. He feels they were not only not interested, but didn’t know how to be interested. They had no idea how to understand it. Generally, he feels Holocaust survivors share his feeling: that people have no way of grasping what they went through.

Even though he was not a part of the Montreal Jewish community, there was one Jewish person who had a tremendous influence on him. His mother sent him to a B’nai Brith camp in the Laurentians and William Shatner was his camp counsellor. His mother must have been quite shrewd, because she realized that he would do things in camp that he couldn’t do in school; Shatner used to give him special lessons in English and had him act in a play. By the time September came along, after six weeks at camp, Fred was able to speak English fluently. He has never been in touch with William Shatner to tell him how important he was to him in his early life in Canada.

Adapted from Room for All of Us, Copyright © 2011 Adrienne Clarkson. Published by Penguin Group, a division of Pearson Canada Inc. Reproduced by arrangement with the publisher. All rights reserved.

FILED UNDER: Adrienne Clarkson Room for All of Us William Shatner