REVIEW: A Case for Solomon: Bobby Dunbar and the Kidnapping That Haunted a Nation 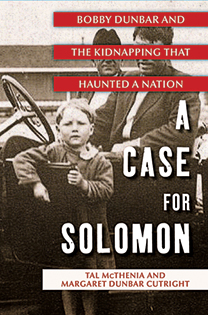 One hundred years ago this week, a four-year-old went missing in Louisiana. When he was found eight months later, it marked the beginning of a puzzle that wasn’t solved until 2004. A Case for Solomon tells the story of Bobby Dunbar, who disappeared from the swampy shoreline where his well-off family was camping on Aug. 23, 1912. Eight months and multiple sightings later, Bobby was found in the company of William Walters, a piano tuner who eked out a living roaming from town to town. But Bobby’s reunion with his family was not what you’d imagine. There were questions: why did his mother at first say she didn’t “recognize the light in his eyes”? Where was the scar on Bobby’s left foot from the burn he suffered as a toddler? And, most significantly, why was a poor woman of dubious virtue claiming that Bobby was her own son Bruce? Her claim remained unproven despite an elaborate trial that consumed two U.S. states for two years. Walters was eventually convicted. And the young boy lived the rest of his life as Bobby Dunbar.

The spark for shaping his story into a book was a 2008 documentary that reporter Tal McThenia made for the radio show This American Life. McThenia had worked with Bobby’s granddaughter, Margaret Dunbar Cutright, whose father had handed her a binder stuffed with news stories, letters and documents about the case in 1999. After the show aired, the pair decided to collaborate on a book. What they unravel is intriguing, and the detail and thoroughness of the authors’ research is evident, if exhausting at times. DNA testing revealed Bobby’s true identity in 2004 (no spoilers here, but it’s hardly a surprise). Much more captivating is the daily newspapers’ role in the outcome of the case, and how their headline-chasing incorporated a level of thuggery and deceit that makes London’s recent phone-hacking scandal look like piffle. It’s a reminder of how the media can shape public opinion, something that hasn’t changed all that much in 100 years.