Was this war crimes suspect mad or cagey?

A book review about an unsolved mystery from World War II 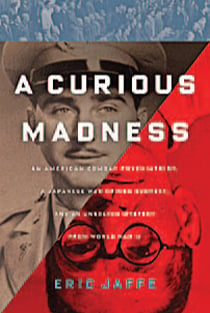 A Curious Madness: An American Combat Psychiatrist, A Japanese War Crimes Suspect, and An Unsolved Mystery From World War II

On May 3, 1946, proceedings opened at the other war crimes tribunal—not the one in Nuremberg with the Nazi defendants, but the one in Tokyo, where the Allies had indicted 28 Japanese leaders. Former general and prime minister Tojo Hideki, the internationally recognized face of Japanese militarism, was the star defendant; the others included other former prime ministers, generals, admirals and high-ranking officials, and one civilian. He was Okawa Shumei, a prominent intellectual and theorist of Japan’s imperial destiny, described by the prosecution as “the spark plug that kept the whole [aggressive-war] conspiracy alive and going over the period covered in the indictment.”

That afternoon, while the 55 charges were read out, Okawa rose up, extended his arm and slapped Tojo on the top of his bald head. A little while later, after an American officer had relaxed his restraining hold and, crucially, a newsreel camera was trained on Tojo, Okawa broke free and slapped him again. Okawa was sent for psychiatric evaluation by Maj. Daniel Jaffe, one of the U.S. Army’s few combat psychiatrists, and author Jaffe’s grandfather.

Jaffe subtly threads together a twin biography of two men who met for barely half an hour: his grandfather, a man who coped for years with the lengthy illness of a schizophrenic mother, and Okawa, who is as remembered in Japan as he is forgotten in the West. The fortuitous timing of Okawa’s illness—Daniel Jaffe diagnosed the mental effects of tertiary syphilis—and his later recovery and release, while seven of his co-defendants ended up hanged, sparked rumours that have not yet ceased in Japan. Okawa had syphilis but it hadn’t yet affected his intelligence; the cunning philosopher put one over on the unimaginative Americans, says one. Or he hadn’t originally set out to feign madness, but to turn the trial into absurdist theatre in protest of what he saw as victors’ justice; only when he realized how the Americans read his actions did Okawa adopt the get-out-of-jail-free defence.

Or, in an idea that has gained traction in Japan over the decades, it was the Americans who seized an opportunity. They didn’t really want to put on open trial a man whose alleged crime lay in the area of ideas (as opposed to a commander of troops who had committed atrocities), a man whose defence—mounted in excellent English—might well question how the U.S. could try him for urging Japanese colonial expansion at the very time America’s allies (Britain, France and Holland) were trying to reassert their imperial control in Asia and Africa. The war crimes trials look different in hindsight than they did at the time, Jaffe points out, and the story of Okawa raises unsettling questions.