A biography of Robert Ripley, believe it or not

Our review of author Neal Thompson's 'A Curious Man' 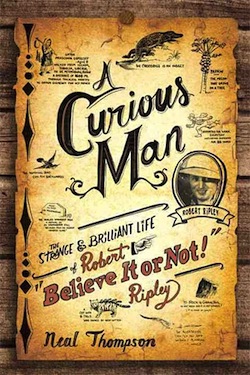 Reading this seasoned biographer’s spicy take on the life of Robert Ripley—the man behind the long-running, sensational newspaper column—leaves one wondering why no one had thought to write up the man’s life before.

It’s every bit as crazy as one might expect, given Ripley’s penchant for all things bizarre. As a child in small-town California, he was an outsider, a misfit who escaped into drawing and a fascination with print media. Among the dramatic events that shaped Ripley’s world view was the carnage from the San Francisco earthquake of 1906.

Ripley went from being an illustrator of sports events to creating Believe It or Not, a cartoon that featured the truth-is-stranger-than-fiction content that became legendary. Just as the world was entering into a phase of rapidly shifting technologies—“radio, moving pictures, vacuum cleaners, electric razors”—audiences gained a taste for Ripley’s esoteric bravado. If you took a small bundle of spider webs and straightened it out, it would span 350 miles. What was the shortest letter Victor Hugo ever wrote? It was a query to his publisher, consisting of one question mark: “?” The reply was an exclamation mark.

Ripley’s burgeoning popularity led to a bidding war over the column. By the late 1920s he was commanding an unprecedented salary from William Randolph Hearst. He would branch out into a radio show, bestselling anthologies and even a TV show. It’s impossible not to think of the current state of the media when reading Thompson’s crisp descriptions of Ripley’s work and life. Given his world travels and his physical traits (he sported a “deformed smile,” “fang teeth” and “jug ears,” according to Thompson), the storied life is begging for a big-screen biopic treatment.

A Curious Man becomes as much a book about one man’s life as it does about his influence on the zeitgeist. Ripley was a man who helped bring us where we are today: a culture constantly on the hunt for its next fix of weird.