Book review: Hilary Mantel's 'The Assassination of Margaret Thatcher and Other Stories' 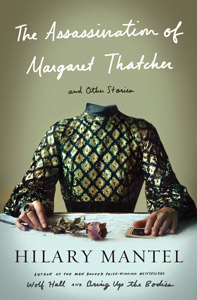 THE ASSASSINATION OF MARGARET THATCHER AND OTHER STORIES

There’s a furious atmosphere in the pieces here, with menace as its primary component. Marriage is marked by psychic distance and ominous silences; families seethe with tension; travel exposes characters to off-putting sights and fateful miscommunication. In a recent interview, Mantel, a two-time Man Booker Prize winner, discussed a productive hospital stay “full of morphine” that helped her figure out the title story: “I simply stayed up all night making up stories . . . It wasn’t me going temporarily mad; it was a drug-induced thing. But, as a writer, you try and use everything.”

Originally published between 1993 and 2012—although “Assassination” is brand-new—the 10 stories share a view of the world (but most often England) as weirdly out-of-phase and its people as stricken. Collected, they’re equal parts alluring and distressing. In “Sorry to Disturb,” a solitary English married woman in Saudi Arabia during the mid-1980s meets an abrasive Pakistani businessman (as her diary notes, her social failings widen the cultural gap). Years later, she wonders if the stay in Jeddah left her “off-kilter in some way, tilted from the vertical and condemned to see life skewed.”

Family dynamics likewise register as unnervingly off-kilter. Two sisters battle over the youngest’s anorexia (“I don’t mind; the less of her the better,” quips the eldest) in “The Heart Fails Without Warning.” The woman in “Offences Against the Person” recalls the illusory spotless life of her teenage years (“We lived in an entirely dust-free house, with a mother occupied full-time in whisking it”), while “The Long QT” begins with a teasing sentence (“He was 45 when his marriage ended, decisively, on a soft autumn day, the last of the barbecue weather”).

With subtle but sure-handed details, Mantel conjures up ordinary middle-class images—a vacation, a stay in a provincial hotel. Distorting them by small degrees, though, she draws attention to anxieties that course just below the surface. That technique pays off handsomely in the title story. A surreal but beguiling fantasy, it recounts “the day of the killing,” tracing the thoughts of a housewife as she helps a gunman who cons his way into her house in 1983 so that he can kill the owner of a notorious “glittering helmet of hair.”