Book review: Eimear McBride's 'A Girl is a Half-Formed Thing' 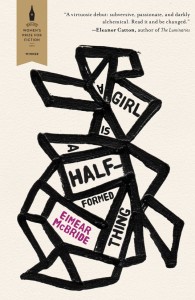 A GIRL IS A HALF-FORMED THING

Eimear McBride’s debut novel arrives with a tumultuous backstory and a cavalcade of awards, including the Baileys Women’s Prize for Fiction and the Goldsmiths Prize. By now the publication path of A Girl is a Half-Formed Thing is all-too familiar: written when McBride was 27, mined from her own life, and rejected by publishers all across the U.K. and her native Ireland for the next nine years until the fledgling co-op Galley Beggar Press saw what so many did not, but which a great many readers are finding out: the book is brilliant.

The novel’s bones are simple but strong: the unnamed young female narrator tries to make sense of a life pummelled by trauma, and the abiding love she has for her older brother, stricken with a brain tumour in childhood that hangs over the entire family like a black cloud that can’t be dissipated. Her mother is cruel and neglectful. Authority figures, within the family and beyond, fail and abuse her. Religion is both balm and bewildering. She finds what she thinks is comfort in promiscuity, the relentless sexual exploits affording a false sense of confidence that fades into numb, repetitive horror.

What critics have either complimented or been baffled by is McBride’s prose, which might be described as the changeling child of James Joyce and Gertrude Stein. Random examples: “Mad lust of it you get for computer games go blip across the screen.” Or: “Little sisters are. Yuck. I hate girls in the schoolyard. But still lie belly on the stairs with me. Who zooms quickest? Face first? Feet? Would you ever mind your brother’s head.”

What sounds disconnected forms an interlocking pattern of internal consciousness. If you dial into the rhythm and hear the narrator in your head, as I did, the Irish cadence and cry of despair sounds a plaintive, soprano tone. In essence, A Girl is a Half-Formed Thing is the most acute depiction of post-traumatic stress disorder. That McBride could tap such a monumental well of feeling, turn it inside out, and present it for the reader’s interpretation and judgment is literary miracle. Too many prize wins? I say the book hasn’t won nearly enough of them.

FILED UNDER: a girl is a half-formed thing book reviews eimear mcbride