A divorce lawyer's novel about divorce

A review of 'The Divorce Papers' by Susan Reiger 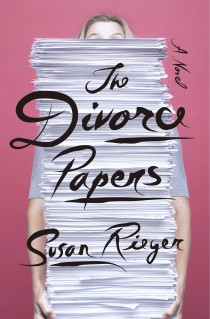 For many reasons, I spent an inordinate amount of time in 2013 reading legal documents. At their worst, they are turgid, bloated monsters, never straying far from limping legalese. At their best, they tell great stories, of financial misdeeds and criminal depravity, in deceptively succinct sentences. The facts outweigh the emotion, the numbers dominate the nuance. But dispositions and motions and summary judgments can, even if unintended, veer toward art.

Susan Reiger understands this in her first novel, The Divorce Papers. The conceit is hardly unique: Recount the story of a marriage breakdown in all of its paper-pushing glory, starting with handwritten notes, moving to memos and emails, and encompassing contracts, settlements, objections to settlements, and the like. It’s another retread of the epistolary novel. But with its memorable characters and strong sense of charm and wit, what a retread it is.

The battleground is the increasingly acrimonious divorce of New England socialite Mia Mieklejohn Durkheim (whose lineage rears back to the Mayﬂower) and Daniel Durkheim, a prominent pediatric oncologist. Eighteen years of marriage devolves into a custody battle for their 10-year-old daughter, Jane, but also over material things—the house and its contents, various bank accounts—and existential things such as pride, ego and dignity.

For Sophie Diehl, the young criminal law associate Mia picks to be her lawyer, embarrassment rules the day. The 29-year-old prefers pixels to people, facts over complicated feeling. The palpable terror she feels working the case is expressed in emails to colleagues, friends and potential love interests. But eventually, Diehl finds her inner lion and lives up to the faith Mia has in her. We can’t help but root for her, as she discovers she’s a different person than she thought she was.

Reiger, an academic and one-time divorce lawyer, has carefully constructed the story so it moves along, key revelations dropped into the right email or document or memo. Besides Sophie, Mia and Daniel there are a host of memorable supporting players. If the book has one flaw, it’s that the frothy confection feels a little too considered—but not enough to spoil the fun.