A dual portrait of Dietrich and Riefenstahl 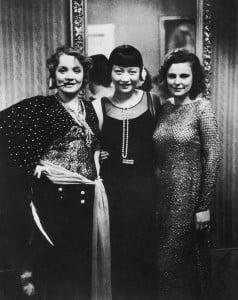 They were two women, born less than a year apart in Berlin at the dawn of the 20th century: Marie Magdalene Dietrich, renaming herself Marlene at age 14, and Helena Bertha Amalie Riefenstahl, familiarly known as Leni. Though they didn’t meet until 1929, at one time in their lives they lived in side-by-side apartment buildings—in such close proximity each could see into the other’s window. Far more similar than either would have wanted to admit, both were beautiful, fiercely disciplined, staunchly independent and toweringly ambitious, determined to achieve stardom. And so they did, following sharply divergent paths to fame.

As this dual portrait reveals in rich detail, powerful mentors determined the course of their careers. For Dietrich it was director Josef von Sternberg, who cast her in the breakthrough role of cabaret chanteuse Lola Lola in The Blue Angel—a part that Riefenstahl, according to some accounts, wanted to play— orchestrated her entry to Hollywood and helmed six of her earliest American films. As Dietrich later insisted, “He invented me.”

For Riefenstahl, who achieved limited success as a dancer, actress (she was more admired for her athleticism than for her thespian skills) and filmmaker, that mentor was Adolf Hitler, to whom she finessed an introduction in 1932. After unsuccessfully wooing her, he invited Riefenstahl to serve as his National Socialist Party’s official documentarian, providing unlimited resources and financing. Her power, and notoriety, rose alongside his as she shaped such propagandist masterworks as Victory of Faith, Triumph of the Will, and Olympia, her chronicle of the 1936 Berlin Olympics.

While Riefenstahl spent the war years cozied within the Führer’s inner circle, her one-time rival Dietrich, now an American citizen, numbered among the most ardent celebrity supporters of the Allied cause. She crisscrossed the U.S. selling war bonds, toured with the USO across North Africa and Europe, and was the first woman ever awarded the Medal of Freedom.

Postwar, both Dietrich and Riefenstahl, who vehemently denied her intimacy with Nazi leaders, achieved remarkable self-reinventions. Riefenstahl turned to photography, earning global praise for her work. Dietrich, no longer an ingenue, parlayed a weeklong engagement in Vegas into more than three decades as one of the world’s foremost nightclub headliners.

Sadly, the perennially peripatetic Dietrich, living out of suitcases her entire adult life, died alone in Paris at age 90, a penniless recluse. Riefenstahl outlived her by more than a decade, naively clinging to the belief she might someday, somehow escape Hitler’s long shadow.