A dystopian reading list for the Donald Trump era 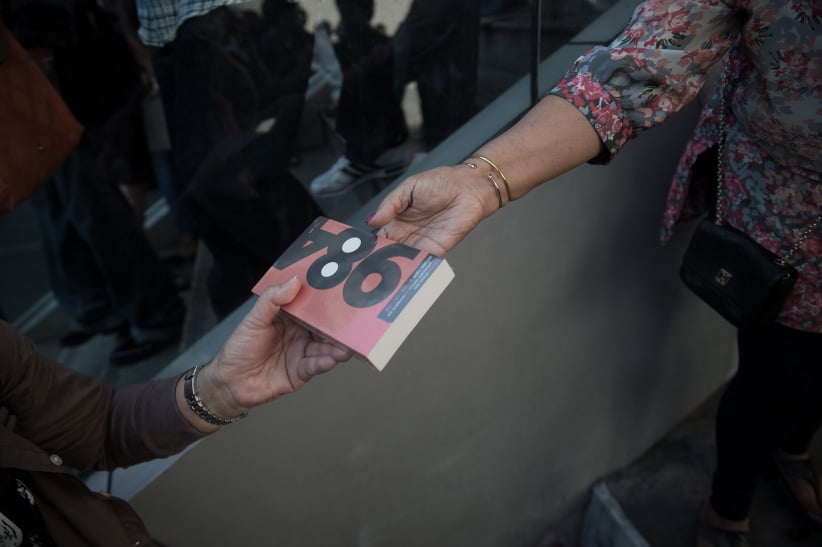 A demonstrator (R) gives George Orwell’s book ‘1984’ to a woman outside the Art and Cultural centre during a rally in Bangkok on February 14, 2015. (Nicolas Asfouri/AFP/Getty Images)

Just as Ayn Rand’s The Fountainhead likely heads the reading list for Donald Trump devotees, George Orwell’s 1984 keeps popping up—like Fear and Loathing in Las Vegas by Hunter S. Thompson—in the commentary of those who fear and loathe the new president. With the Trump administration’s recent blithe reference to “alternative facts,” it’s hardly surprising journalists couldn’t help but cite, “We have always been at war with Eastasia.”

Even so, anti-Trump readers might be better enlightened, or more deeply alarmed, by the other great dystopian novel of the first half of the 20th century. Brave New World by Aldous Huxley reflects a society kept in line not by Orwell’s jackboot ceaselessly stamping on a human face, but by what Christopher Hitchens described as “a painless, amusement-sodden, and stress-free consensus [resulting in] true blissed-out and vacant servitude.” Naturally too, Orwell’s Animal Farm deserves mention, where angry drain-the-swamp types seize power only to become the local equivalent of billionaires.

The massive Women’s March the day after Trump’s inauguration also helped make Margaret Atwood’s feminist dystopia The Handmaid’s Tale top-of-mind for many, although in truth the theocratic Republic of Gilead is not an easy fit with the notoriously irreligious president—not the way it is with many more mainstream misogynist and anti-abortion Republicans. (That in turn sparks the realization, sobering not for feminists alone, that Donald J. Trump is all that stands between the United States and rule by president Mike Pence.)

Sinclair Lewis’s It Can’t Happen Here, a 1935 warning about the possibility of American fascism, hasn’t escaped notice—nor should it, given some intriguing similarities. The novel’s authoritarian presidential candidate, soon to be a president-dictator, runs on a platform of restoring the nation to pre-Depression greatness; his political style is to sneer at “tact” and “courtesy”; his administration puts considerable energy into insulting Mexico; his opponents flee to Canada. And it’s all very popular, at least at first. (The role of Canada in the American political imagination is worth several Ph.D. theses: we are here, always untouched by whatever is roiling the U.S., and always an option—the anti-Mexico, so to speak.)

Strangely absent from most Trumpian literary references is The Hunger Games, despite its popularity and parallels. At its core, Susan Collins’s trilogy is a searing mockery of the entertainment genre that was the making of Trump: its central violence—the marginalized tearing one another apart for the amusement of the one per cent—is broadcast as “reality” TV, right down to the off-screen fakery devoted to keep the action lively as well as real.

But perhaps the anti-Trump forces should pass on the dystopias and consider whether the president’s true literary home is in absurdist literature. The Magic Christian by Terry Southern is about an eccentric (to put it kindly) billionaire who devotes his time to demonstrating, via hideous practical jokes, the depths to which people will sink in the pursuit of wealth. Some are simply funny, as when police officers eat parking tickets in exchange for cash. Some are more, uh, thought-provoking: the playful billionaire builds a wall around a vacant downtown lot, fills it with offal, feces and a vast amount of spread-out cash, and takes deep joy in watching the populace wade through it for the money. Too crude, too unbelievable, rings no bells in current affairs? Then try Being There by Jerzy Kosinski, the original home of the Peter Sellers film character Chance the gardener. Put aside that whole moral character thing—Chance is a kindly soul—and comedy becomes prophecy. Through various accidental encounters Chance, whose entire body of knowledge consists of what he’s seen on TV, becomes a highly touted economic guru and in-demand political candidate.