'Not all fairy tales are happy'

A review of "The Fairy Tale" by Jonas T. Bengtsson 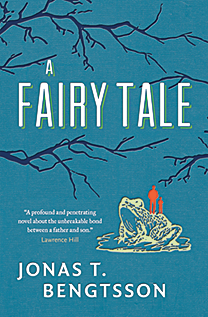 It’s New Year’s Eve, 1987, in Copenhagen, Denmark. A man and his seven-year-old son stand outside an apartment building a few streets away from their two-room tenement home. As they wait, the father chain-smokes. Finally, he tells the boy to take off his hat and pretend he’s going to a party. They enter the building and climb to the top of the stairwell. The father waits for the countdown at midnight to hammer open a door that leads to the roof, where he produces a blanket and a Thermos of hot chocolate. “We lie on our backs next to each other as we watch the fireworks,” reports the boy. “The city explodes in light; I cover my ears while I laugh. Around us, rockets fall into the gutters.”

In a sense, the last line captures the theme of this novel, Bengtsson’s third and first to be translated into English. It is the story of a father who thinks the world has gone to rot and keeps himself and his son very much separate from it, subsisting on income from odd and sometimes seamy jobs, including one gig in which he drills fake wormholes into cheap furniture to help a shifty man pass it off as “antique.” He is a loving dad, frequently fun, and he provides—though doesn’t always pay for—whatever his son needs. (His father persuades a dentist to fill his son’s cavity free of charge: “You’ll want to help us.”) He teaches him everything he knows—poetry, Latin, German, French, history—but doesn’t let him go to school with other children.

Their story is delivered in short, lively chapters, narrated by the boy (neither his name nor the father’s is ever revealed) and there is something undeniably enchanted about their way of life. For the boy’s birthday, the father takes him to a department-store cafeteria and helps him spot an angel. They spend all of one Christmas Day sailing a remote-controlled boat, stopping only for lunch or batteries. But, at the same time, it’s clear something is very wrong—unpredictably, the dad will decide to move, or begin to read obsessively, or take such drastic measures to protect his son that he risks doing the opposite. Not all fairy tales are happy, but they do need some element of magic. In this book, it’s in the singular bond between father and son, at once indestructible and utterly fragile.