A rare delicious CanLit bun fight, David Gilmour vs. André Alexis is a snapshot of a flawed scene 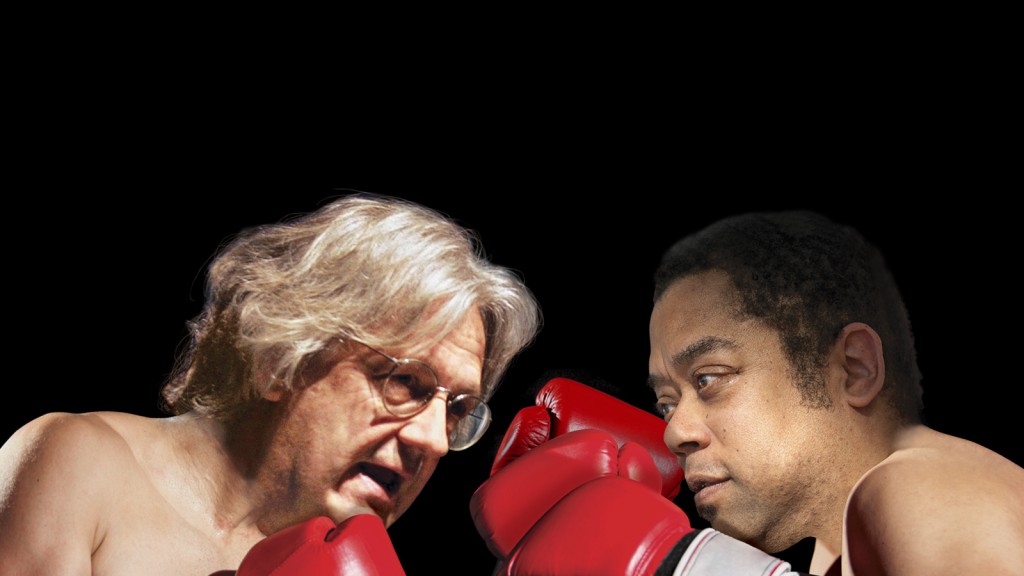 Last fall, the author, broadcaster and sexagenarian CanLit bad boy David Gilmour caused the the Internet to explode when he said he doesn’t “love women writers enough to teach them” in his modern short fiction class at the University of Toronto. In an interview with the online literary magazine Hazlitt, Gilmour revealed he teaches only “serious heterosexual guys”—that familiar “manly man” canon that includes Chekhov, Tolstoy, Fitzgerald, Henry Miller and Philip Roth. Outrage was immediate: Editorials were written, bloggers fulminated. Gilmour was branded “sexist,” “misogynist,” an archaic relic of white-man privilege.

Now, in a podcast and a long essay titled “Of a Smallness of the Soul,” released last month on The Biblio File blog, the novelist André Alexis, who is black, has added a new charge: racism. More specifically, Alexis accuses the narrator of Gilmour’s 2011 roman à clef, The Perfect Order of Things, of relying on “obvious racist tropes.” The source of Alexis’s aggrievement is the depiction of René Goblin, a character known to be based on Alexis. The essay also names reviewers of The Perfect Order of Things who Alexis argues overlooked the racial politics in the portrayal of  “an ugly, jazz-loving and dreadlocked spook—given his marching orders by a character named ‘Lynch’—[who] ends up happy once he’s put in his place for dissing and then eyeballing an endlessly appalled white man.”

Alexis’s accusations, which received little coverage beyond the industry magazine Quill & Quire, mark the latest salvo in a rare Canadian literary feud, one that runs refreshingly contrary to public CanLit politesse. Such feuds are common south of the border; they saw their golden age in the 1970s, when acclaimed authors, including Norman Mailer and Gore Vidal, famously—and highly quotably—duked it out on The Dick Cavett Show. “I’ve had to smell your works from time to time, and that has made me an expert in intellectual pollution,” Mailer told Vidal. It was to Cavett that Mary McCarthy uttered her immortal dismissal of Lillian Hellman: “Every word she writes is a lie, including ‘and’ and ‘the.’ ”

Like most feuds, the Gilmour-Alexis dust-up dates to a critical book review, in this case, Alexis’s appraisal of Gilmour’s 2005 novel A Perfect Night to Go to China, in the Globe and Mail. Alexis deemed the book “fairly compelling” with “lovely sentences,” a lethal barb. He took exception to the narrator, which, being a David Gilmour novel, was seen by many to be Gilmour himself: “It’s hard to accompany a character so obsessed with his own bullshit,” Alexis wrote.

Compared to the blood sport that reviewing can be in the U.K. and the U.S., it was a Valentine. Still, it stuck in Gilmour’s craw for years: “Nobody but a guy who had a chip on his shoulder, or had some problem with chicks or something, would come after me for this book,” he said in a 2011 interview, noting it had won a 2005 Governor General’s Award. He’d tried to hunt Alexis down after it ran, he recalls: “I thought, ‘I’m going to beat the living s–t out of this guy.’ ” In a nice Mailer-esque touch, he went into “every goddamn bar” on Toronto’s College Street, demanding, “You tell him David Gilmour’s here.”

Failing to pummel Alexis in person, Gilmour created René Goblin, a critic who looks like a “deposed African tyrant” with greying dreadlocks, thick glasses and pink gums seen when he smiles. “Why are all those men always so ugly?” the narrator asks. Two years later, Alexis counterpunched in his 2013 novella A, with the character of  “Gil Davidoff,” a “self-important” womanizing author of Slow Boat to Peru: “Speaking with Gil was like watching a bird with a broken wing attempt flight: round and round going nowhere,” Alexis writes. When a blogger noted obvious similarities between Gil Davidoff and Gilmour, Alexis responded archly in the comments section that the character was based on Gilmour’s “fiction”: “So, it couldn’t possibly be an accurate portrayal of a self-absorbed, pathologically narcissistic, male chauvinist prick who likely brings his own good press clippings on first dates so he can reassure the ‘chick’ that she’ll be f–king someone important if she surrenders to him. I bet the real ‘David Gilmour’ is nothing like his fictional counterparts. I bet he’s a good guy who goes to church on Sundays.”

As fate had it,  A was published weeks before Gilmour’s “No Girls Allowed” edict made him an international cause célèbre. Literary lampooning was redundant: Gilmour was proving that no one does a better David Gilmour parody than David Gilmour himself. Now that the dust has settled, Alexis wants to revive their conflict. Gilmour doesn’t. He waves off his archrival’s charges: “André is a silly man and a second-rate writer,” he writes in an email, before deflating himself as well: “We are both silly men and second-rate writers.” He again invokes the “guys’ guys” as comparison: “Think of Proust, Tolstoy, Chekhov, Rimbaud, Capote, Fitzgerald, Roth and so on,” he instructs. It’s time to move on, Gilmour says: “Let us ﬁnd a worthwhile enemy, a really overpraised pud, and leave this foolishness and nickel-and-dime quibbling behind.”

Alexis shows no sign of stepping down. The issue isn’t personal, it’s cultural, he says: “The racist elements are of concern to me less for what they say about David Gilmour, the man, than for what they suggest about how my society allows members within it to be belittled,” he says. He believes American reviewers would have jumped on the racial politics, and questions why Canadian reviewers didn’t: “Is the charge too severe? Or are the racist elements unclear to them?”

The pleasure of literary feuds is that they’re verbal bun fights between highly articulate people with axes to grind that teach nothing. But Alexis vs. Gilmour does offer a snapshot of two extremes within CanLit, despite the two men’s similarities. Both are respected writers, prolific and feted. Both have been nominated for the Giller prize. Both share disdain for industry schmoozing. “I don’t go to literary things,” Gilmour said in 2011: “Canadian writers are so insecure, I can’t bear their company.” Alexis avoids these events, too, he said on the Biblio File podcast: “It tends to remind me of how petty I am,” he joked.

Where Gilmour excels at testosterone-fuelled confessional, Alexis is known for artful social satires and parables. But he isn’t afraid to mix things up. His 2010 essay, “The Long Decline,” in The Walrus, accused Canadian literary criticism of devolving into personal opinion. For this, he blamed John Metcalf, senior editor of Canadian Notes & Queries, a lively forum with a tiny audience willing to take on CanLit untouchables. (He also slammed the Toronto Star, which referred to his 2008 book Childhood as the “Great Ottawa Novel: cultivated, affluent and terminally bureaucratic in design and effect.”) It caused an uncommon flutter. Critic Jeet Heer refuted Alexis in the National Post, pointing out that “Canadian reviewers are too forgiving of bad writing, and our literary culture is corrupted less by rampant snark than by habitual back-scratching and tireless log-rolling.” Zachariah Wells countered with a “rejection letter,” with a point-by-point takedown. (Wells is known for taking on sacred cows, and being aware of the cost of doing so: A collection of his essays is titled Career Limiting Moves.)

Such iconoclasm is as rare as literary feuds. “We live in this mute country; everyone is so terrified,” says one high-profile publishing insider who, tellingly, requested anonymity. He traces CanLit’s hothouse delicacy to its origins as a protected environment in which writers are nurtured by government grants. A lack of mature discussion was evident in the “absurd lynch mob” response to Gilmour’s comments, he says. “Feminists should have said, ‘You’re an idiot, but let’s talk about it.’ It would have been much more useful and intelligent. Now his name is a meme for misogyny.”

He has a point. Gilmour’s comments were made in a triumphant year for female writers: Alice Munro won the Nobel, Lynn Coady the Giller, Eleanor Catton the Man Booker. Yet the year was also riven with retrograde discussion that echoed Gilmour’s sentiment: Claire Messud was forced to deflate stupid questions about her character’s “likeability”; the question of how many children female writers should have was hotly debated. A more substantial discussion would have been quite welcome.

That is also true of the issues raised by Alexis. Ironically, when his novel Pastoral came out this year, the Globe and Mail ran a positive review that mentioned he’d referred to Maclean’s as a “pointless rag . . . associated with doctors’ ofﬁces and outhouses near Goderich.” Alexis responded in the comments that it was his character, not he, who held such blasphemous opinions: “I personally have nothing against Maclean’s magazine,” he wrote. Now such laboured distinctions between author and narrator are hardly necessary. After all, Gilmour’s unimaginative, ugly racial stereotyping in the service of a personal vendetta was no more palatable coming from his novel’s narrator.

In any case, what was Canada’s most robust literary feud may be petering out. Short of a public debate, the truth about who meant what will remain unknown. What we do know is that we live in a country where a writer who criticizes a national magazine is called on it, but one who falls into incendiary racial stereotype is not.