REVIEW: A Geography of Blood: Unearthing Memory from a Prairie Landscape 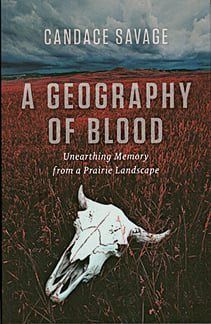 A prolific author, Savage, 62, is often described as a bird writer—and, to be fair, she is an exceptionally good one, as shown in Crows: Encounters with the Wise Guys of the Avian World (2005)—but the breadth of her two dozen books shows she’s really a writer of place. It’s the intersection of landscape, people and natural history that most intensely captures her attention, and that focus is on display in Geography of Blood, a meandering memoir that ultimately arrives at a disquieting destination.

Savage, a prairie girl, begins over a decade ago, when she was drawn to the Cypress Hills area of southern Saskatchewan, near the small town of Eastend, where she and her partner Keith Bell first stayed in the boyhood home of celebrated American author Wallace Stegner, and later bought a house. Slowly, she starts to see what lies unnoticed around her (the circles of stones that anchored teepees for innumerable generations), she starts to read about the not-so-distant past (the West’s abrupt and bloody transformation in the latter 19th century) and, most importantly, she starts to feel the absences, so recent in natural history terms, that echo across the land.

Savage is not ploughing entirely new ground here. Sharon Butala, an Eastend resident herself, wrote hauntingly about the Prairies’ new human emptiness seven years ago in Lilac Moon. But Savage extends her own journal of the plague years to cover the wider destruction of the natural world: the wolves, the birds, the plains grizzly—in the winter of 1871-72 a single Hudson’s Bay post acquired 750 local bearskins—and, of course, the buffalo. In little more than a decade, millions of creatures were gone, and so too, at least from our sight, were tens of thousands of humans, made “refugees in their home and native land, launched on a journey of desolation.” Forget the residential schools, Savage seems to be saying, this is the primal sin, the one we have yet to face up to.