A history of Hamilton’s Teenage Head, punk pioneers in Ontario

Book review of Gods of the Hammer: The Teenage Head Story 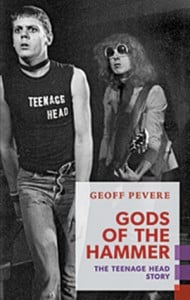 GODS OF THE HAMMER: THE TEENAGE HEAD STORY

We all know the stories of the great rock’n’roll bands who rose above outsider status, managerial weasels and subpar recordings to build a legendary status, the kind of band that baffles youngsters and has old-timers—especially punk rockers—chortling to themselves, “You shoulda been there, kid.” Hamilton’s Teenage Head ruled the roost in Ontario at the dawn of punk in the late ’70s: Their local peers were either too arty or too delinquent to consistently deliver the goods on stage.

Teenage Head’s singer, Frankie Venom (né Kerr), was a gigantic personality who dominated every corner of every club he ever played. His band is best known for causing two legendary punk rock riots: one at the genteel Ontario Place Forum, where they drew over 18,000 raucous fans; the other at “the Last Pogo” punk festival at Toronto’s Horseshoe Tavern, where Teenage Head played but one song before the cops shut it down and a riot ensued. What did the band do to follow up the myth-making Last Pogo? Why, they immediately hopped a train heading east to Oromocto, N.B., where their manager had booked them to play a week-long gig at a military base. (They lasted one night.) That’s the Teenage Head story in a nutshell: killer live shows followed by questionable career decisions. Don Pyle, photographer and drummer of Shadowy Men on a Shadowy Planet, says relentless touring was booth boon and bane. “In some ways, it elevated them because tons of people saw them, all those little towns that [other punk bands] weren’t going to: North Bay, Sault Ste. Marie. It kept them going, but was killing them at the same time. It was like chemotherapy.”

Pevere, co-author of Mondo Canuck, writes with convincing enthusiasm. He has no trouble finding sympathetic secondary sources, people who claim that the first Teenage Head album—which even Pevere and the band themselves think is poorly recorded and grossly under-representative—“is the most important Canadian rock’n’roll record ever made.” Yet surely not every mishap in Teenage Head’s career was someone else’s fault; despite their strength, the band had a limited palette and, arguably, an expiration date: No one over 30 should still be singing a song called “Teenage Beer Drinking Party.”

Pevere doesn’t linger on the decline, of course. For him, Teenage Head will always be about the rush of being young, hot-blooded, and finding transcendence in a sweaty rock club.

FILED UNDER: book reviews Geoff Pevere Gods of the Hammer