A Houdini novel with an ingenious reveal

A review of 'The Confabulist' by Steven Galloway 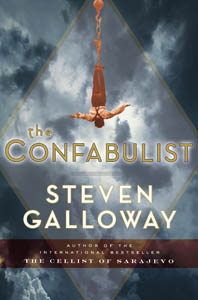 Galloway is the rare Canadian novelist who could probably make a living just by writing novels. His last book, The Cellist of Sarajevo, crossed over from the niche literary world into the mainstream, earning the Vancouver writer a huge global audience. In that novel, Galloway used a real historical moment—a cellist playing in the ruins of siege-time Sarajevo—to spin an entirely fictional tale, about a young female sniper hunting an enemy assassin in the war-wracked Bosnian capital.

The Cellist of Sarajevo was highbrow with thriller pretensions. It was taut. It was moving. And it seemed almost perfectly calculated to appeal to critics and everyday readers both. In The Confabulist, Galloway is playing a similar game. Again he’s mining history and again he’s riffing freely from what he finds. The result is another novel with a whizz-by plot and surprising thematic depth.

The book tells two interlocking stories: one of the legendary Harry Houdini and the other of Martin Strauss, a former McGill University student who meets the magician at a crucial point in both men’s lives. In the opening chapter, the elderly Strauss is diagnosed with a rare neurodegenerative disease; until he dies, his brain will be creating new false memories for him, slowly replacing his own real past with a fictional one. The diagnosis spurs in Strauss a new urgency to lay down the true story of his interactions with Houdini for Alice, a secret daughter the conjurer never knew.

What follows is an impishly fictionalized retelling of the Houdini myth, one that imagines the man as not only the greatest magician who ever lived, but also a somewhat reluctant tool of American and British secret agents who gets drawn into Romanov intrigue and ends up on the wrong end of a shadowy mentalist plot. The details of Strauss’s role are slippery and slowly revealed. They hinge broadly on love, loss and a lifetime’s regret for a single wrong choice made.

Galloway, who is the acting chair of the University of British Columbia’s famed creative writing school, has a real gift for narrative pacing. In The Confabulist he uses it, like a magician uses misdirection, to mask his real aims. From page 1 on, the book builds toward a single big reveal. And when it comes, it’s satisfying and just surprising enough to make you wonder how exactly you were surprised.