A lifetime of snooping

Review of Casebook, the latest novel from Mona Simpson 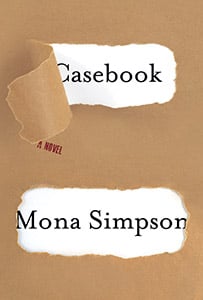 “I was a snoop, but a peculiar kind,” begins Mona Simpson’s sixth novel, Casebook, narrated by young Miles Adler-Rich, a self-styled spy growing up in Los Angeles, whose investigation targets his parents. “I only discovered what I most didn’t want to know.”

Miles begins snooping at age nine, hiding under his parents’ bed with a walkie-talkie. There, he overhears a conversation that gives him a first hint their relationship is unravelling. Miles’s dad tells his mother, affectionately called “the Mims,” that he’s begun to feel attracted to other women—he’s sensing “opportunities,” as he memorably puts it. The Mims, who’s “pretty for a mathematician,” slumps down on the bed, almost squashing Miles, hidden below.

Miles’s parents separate, and the Mims starts seeing someone new: Eli, who Miles calls “the dork guy.” Enlisting his friend Hector, the boys plug an old phone into an unused extension, and listen in on conversations between Eli and the Mims. Access to that adult world of love and sex provokes different emotions in Miles (who’s now going through puberty), ranging from confusion and alarm to occasional boredom, and a retreat to his comic books. Time goes by, and he and Hector begin to feel suspicious the Mims’s love interest isn’t all he’s cracked up to be. As Eli’s lies begin to unravel, it’s surprisingly painful for Miles, who in spite of everything, has come to love him.

Although the narrator tells his story in retrospect, looking back on events from his childhood, when he talks about his younger twin sisters (“the Boops”) or his parents’ divorce, he sounds like a real kid—one whose perspective subtly shifts with the onset of puberty, and with the burden of knowledge his snooping imparts. In one unnecessary detail, Casebook is presented as a prequel to Two Sleuths, a fictional comic book that Miles and Hector go on to write (complete with an introduction from the comic’s made-up publisher). The story would have stood better on its own.