A look at extinction and human sloppiness

A review of 'The Sixth Extinction: An Unnatural History' by Elizabeth Kolbert 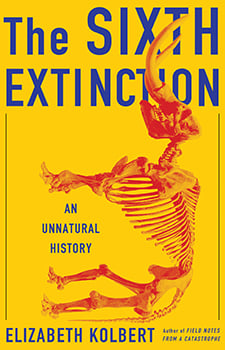 THE SIXTH EXTINCTION: AN UNNATURAL HISTORY

The story Kolbert tells is now familiar in outline to anyone paying attention. What makes her book so powerful—and so woeful, despite Kolbert’s determined search for good news—is the way she ties together all the very bad moments in the history of life, with her finger on the element that always seems to elude human imagination: time. We’ve been on this planet for a geologic minute, and while what we are doing to the rest of its life forms may be repairable, or at least recoverable, that won’t matter to us. Earth has done without corals before, once, for 10 million years after a particularly bad extinction event, which is hopeful news in its way, but cold comfort for humans. Once the dying coral reefs, and the biodiversity they support, are gone by the end of this century, they won’t be back in our species’ lifespan.

Time and chance rule all, says Ecclesiastes, and Kolbert, a New Yorker staff writer, shows life itself is no exception. Creatures with tried-and-true evolutionary strategies can flourish for a million years or more, until normal circumstances are shredded by a great dying; there have been five in the planet’s past. They had diverse origins, from ocean acidification to an asteroid strike, but they were all united by how quickly they acted. Animals and plants had no time to adjust their behaviour or location. The sixth extinction, which has intensified with modernity’s carbon-spewing habit but began when humans—the planet’s most successful invasive species ever—moved out of its African home, is as fast-moving as any.

Everywhere humans colonized, large animals went extinct within a millennium. Growing large enough to be predator-free (in the absence of humans) tends to exact an evolutionary price in slow reproduction, a good bargain—until we show up. We don’t have to hunt them to extinction or even notice what’s happening; Kolbert discusses biologists’ mathematical models that show how minimal “overharvesting” can doom a slow-breeding species in a few hundred years. Humans increased the pace with the Columbian Exchange: Since 1492, we have been undoing the breakup of Pangea 200 million years ago, tossing all life forms back into a common pot. The result, paradoxically enough, is more local diversity—much of what is found in a North American backyard, from earthworms to starlings, has no right to be there—and decreasing global diversity, as predator-free invasive species overwhelm natives.

Kolbert finds hope in heroic conservation efforts (including “ultrasounds on rhinos and hand jobs on crows”), human empathy (for iconic species) and human ingenuity. Perhaps they will be a match for human sloppiness and the globalized commerce that brings bat-killing fungus from Europe to North America or earthworm-eating New Zealand flatworms to Britain.