A lost-at-sea story deserving of all our awe 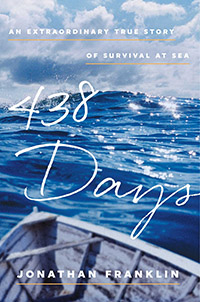 Everyone presumed José Salvador Alvarenga to be dead. Cast adrift at sea by a storm, he scraped together morsels of food and lapped fresh water from rare rains and the condensation formed in the crannies of his tiny craft. Near the end of his purgatory, it was all he could do to cling to his mind’s redoubts, fighting his descent into insanity. This was, for 438 days in 2012, the life of Alvarenga, a Mexican fisherman born in El Salvador whose two-man craft was slung into the Pacific Ocean with its undrinkable water, its sharks, and its mind-numbing expanse. Incredibly, Alvarenga survived, washing upon the shores of the Marshall Islands; his companion, Ezequiel Cordoba, did not.

Alvarenga’s story is told by the journalist, Jonathan Franklin, who wrote a bestselling account of the Chilean miners who famously survived a 2010 cave-in. As with that book, the plodding detail can sometimes mirror too closely the mundaneness of a life adrift. But it does allow you to feel every every tortilla craving; every bird’s neck snapping between his calloused hands, to be eaten; every pulse of an ocean that alternately rushed Alvarenga along its eddies and kept him imprisoned in an infinite stillness.

The reason is hard to nail down. Spending 438 days on a drifting boat with little more than your wits is an experience hard to fathom. Somehow, the idea of being lost in space feels more knowable, and therefore more impressive. And that’s unfair to Alvarenga. After all, the ocean stuns even those who jet off this Earth: “I never really believed that 71 per cent of the Earth’s surface is covered with saltwater until I flew over the Pacific,” said NASA astronaut Jerome Apt. The very word “fathom” is rooted in a measurement of the ocean’s expanse. To be unfathomed was the ocean’s purview first. “This is such a story—and we can tell it,” Alvarenga would urge Cordoba, before he finally succumbed. “We have to fight! To tell our story.” It’s a story deserving of all our awe.