A manifesto for historians: book review

Authors Guldi and Armitage have some advice for the Historians of the world: it’s time to go big. 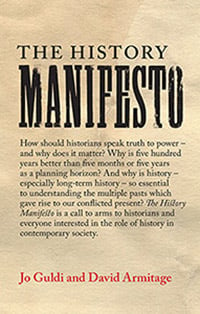 There are few literary genres as bracing as the manifesto, a perspective-wrenching call for the repressed and ignored to rise up and be heard. Authors Guldi and Armitage, respectively professors at Brown and Harvard universities, look back decades to an era when long-scale histories, tackling periods of a century or more, were major influences on bureaucrats and politicians, and historians—like Arthur Schlesinger in the Kennedy administration—were tapped to be policy-makers themselves. In short, back to a day when historians had the public intellectual status now possessed by economists.

Okay, so manifestos, always short on nuance, can be self-serving too. But Guldi and Armitage address their public-spirited argument primarily to their peers. Modern culture is fixated on near horizons (the next quarterly results, the next election cycle), and historians, mired in their own short-termism, are not helping. A 2013 survey of 8,000 history Ph.D. dissertations written in the U.S. during the 20th century showed the average period covered had dropped from 75 years in 1900 to 30 years by 1975. The specialization fostered by so-called micro-history meant, as a British historian quoted in this book put it, “more and more academic history that fewer and fewer people were actually reading.”

Guldi and Armitage do not condemn the micro-historians who dug more deeply into previously ignored sources than did their 19th- and early 20th-century predecessors, whose grand narratives in the service of nation-building mythology gave historians their former eminence. Those micro-historians were crucial in illuminating the stories of the marginalized—the poor, racial and sexual minorities—and pointing out the cracks in our comforting stories of national and civilizational progress. They also learned the techniques to deal with the sort of data that’s exploding in quantity in the digital age and the lesson the authors think should be their profession’s mantra: it didn’t have to be this way.

Guldi and Armitage argue that contemporary society is paralyzed between awareness that slow-moving crises (demographic, environmental and climatic) are coming home to roost and the notion the humanity can do little more than react. And yet here, hiding in plain sight, is a profession trained to explain the past in terms of human agency, of countless decisions that could have gone—and could still go—in other directions. For discerning long-term patterns under surface upheavals, centuries make for a better perspective than decades. There is the manifesto in a nutshell: Historians of the world, it’s time to go big.